B.F Ingelson, RN, MHA and T. Natalini-Whitmore, RN, MS note that while arguments in favor of the Bar Code Medication Administration adoption to reduce medication error rates are compelling, the barriers to the system and receptivity of nursing staff must be considered.

In 2000, the report To Err Is Human: Building a Safer Health System, 1 drew national attention to the problems surrounding patient safety.  According to the Institute of Medicine, as many as 98,000 Americans die each year due to mistakes made by physicians, pharmacists and nurses. Kohn estimates that over 7000 United States citizens die as a result of medication errors each year 2.  Over the years, medication errors have been closely studied, but solutions addressing prevention have been ineffective.

The use of an effective medication administration error prevention system could dramatically reduce the reported 38% of errors that occur at point of care (administration) with the potential elimination of sentinel events (causing patient harm)3.  Information technology can significantly reduce errors and costs while improving the quality of care received by patients in the health care system. Recent solutions have focused on the use of bar-code technology in the patient care areas. Bar-code technology has been utilized in the retail industry and has recently made a place in the health care industry in combination with “smart” software for use in clinical areas4. The bar code scanning system would be used to scan the caregiver assigned bar code, scan the patient’s assigned bar code, and scan the unique medication bar code. The bar code would ensure the right patient receives the right dose, right medication at the right time, via the correct route. This technology assists the caregiver by providing a “double check”. The human-related errors and misjudgments at the point of medication administration would be reduced, with a resulting increase in patient safety.

Although the arguments in favor of the Bar Code Medication Administration (BCMA) adoption in the reduction of the medication error rates are compelling, the barriers to the system and the receptivity of nursing staff must be considered. In particular, nursing perceptions of the BCMA impact on the patient care delivery model has not been widely studied. Implementation of new computerized medication administration systems will challenge existing organizational patterns.

Relationship between Computer Use and Acceptance / Satisfaction, Knowledge and Confidence Levels and Beliefs

Nurses are the last line of defense in the protection of the patient in the medication administration process. The use of technology to improve patient safety will only work if any medication delivery system is utilized as designed. Nurses may develop ways to “work a round” the system, if they do not  accept the new system.

Previous studies have identified the following beliefs about the use of bar code technology: it slows down the nurses work flow; there is difficulty scanning bar codes; computer down times and other system issues are potential barriers. While some of these challenges are inevitable, they can be overcome.  Although bar code technology does not eliminate all errors, when systems are circumvented, the opportunity for errors increases. Organizations need to consider methods to increase nurse buy in, so they will embrace the system and use it as designed.  In order to ensure that patient safety is maintained, the nurse-patient relationship must be at the forefront of any potential change.

The purpose of this longitudinal study was to assess the influence of hospital nursing staff knowledge, beliefs, attitudes and motivation on adoption of new technology, bar code medication administration (BCMA) and ultimately medication errors. The study had a single experimental group quasi-experimental design. The setting for the study was a not-for-profit California community hospital. The study had three phases, prior to BCMA implementation (Pre-test), two months after the system went live (Post-test Phase I), and four years following implementation (Post-test Phase II).

The predictor variables for technology adoption included nurse characteristics (age, years of experience) and knowledge, beliefs, and motivation to use computer technology. Computer attitudes were assessed using the 57-item Burkes’ “Nurses Computer-Use Attitude Questionnaire’ © 5 . This instrument is detailed in Table I. 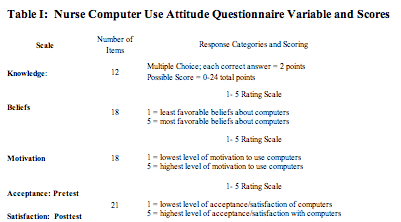 All methods were approved by the Hospital Institutional Review Board (IRB).  All nurses working in the areas were invited to participate in the study prior to the installation of the BCMA. All study participation was voluntary with study consents obtained prior to completion of the pretest. Each participant understood that his or her responses would remain confidential and no one’s identity would be revealed. Subjects provided their own individual code name to enter on the pretests and the Phase I post-tests.

Description of the Sample

Pre-implementation questionnaires were completed by 109 RNs prior to any training on BCMA to decrease the influence of the training on their pretest responses. Post- implementation surveys were completed two months after the BCMA was implemented in their area. The pre-test and Phase I post-test data were linked using the individual identifier codes. The Phase II post-test was completed by a random sample of 100 RNs four years after the BCMA was implemented. No personal identifiers were included. Since the data from the Pretest-Phase I sample and the Phase II post-test sample could not be linked, the characteristics of the two groups were compared for similarities.

Analysis of the demographic and professional characteristics of the two groups found no significant differences in the two groups.

One hundred and nine (109) of the potential nursing staff respondents completed the pretest before the staff was trained on the BCMA system. The majority (N=62; 54%) were employed full-time, N=43(40%) were nursing students in Phase I. About three-fourths of this sample (N=80; 73%) had no prior BCMA experience. All of those who reported previous experience were student nurses who worked in other roles within the organization, and interfaced with BCMA printed reports, but not with medication administration functionality.

The overall goal of statistical analysis was to determine the predictors of BCMA computer adaption and of nurse confidence levels in the use of BCMA and identify the changes in knowledge, beliefs, motivation over time. Descriptive statistics were calculated for all variables, and bivariate analysis was conducted to ascertain the relationship of predictors (professional characteristics and pretest technology mean scores). For each technology subscale, the scores on each item were summed and a mean item score was calculated. For the graphs of the mean subscale item response for the Pre-test and Phase I and Phase II post-test knowledge, beliefs, motivation mean scores, see Figure II.

For the entire sample in Phase I, age and experience were negatively correlated with Technology scores. This was probably related to the inclusion of the student nurses in the sample. Two months after the system was implemented, staff nurses from the critical care areas with low belief scores also had low satisfaction with the system. These scores may be related to an underlying resistance to change imposed by the use of BCMA.

Among the Phase II sample, four-year post-implementation, the negative correlation between experience and age with the technology scores seemed to fade.

When the 43 nursing student scores were analyzed separately, the student’s mean scores significantly improved from the Pre-test to the Phase I Post-test. This positive change may be due to their age and higher adaptability to new technology. This age group had been educated in more technologically savvy environments than the older nurses.

Based on study results, higher satisfaction post technology implementation correlates to higher motivation. This indicates a relationship between staff members that have high motivation and knowledge are more satisfied using technology which leads to increased confidence. It would also appear that nurses with less experience have a higher level of satisfaction with technology related to the safety mechanism offered through the use of technology. It was interesting to note the decrease in belief scores four years post implementation. The BCMA system changed between Phases II and I.  Further inquiry  into nurses’ responses indicates a lower belief in the system rather than the functionality. Overall, 97% of nurses felt that the use of BCMA helped improve patient safety in Phase II.

Many of the nurses anecdotally noted that the system was often “down”, there were scanning issues, and all related feelings of frustration that impact satisfaction. Of note, there has also been a change in the type of BCMA system in the past four years. The nurse may have compared the functionality differences between the two systems, with a higher overall level of satisfaction noted with the previous system that may have lead to the decrease in the belief of the system. System differences were significant.  Staff training for the new system were  two hours longer in order to provide a more complete knowledge of functionality. Screens offered different visual cues and the two systems varied significantly. Warning errors were also different. This is significant when assessing nurse workflow and potential work a rounds.

Overall results of this study indicate that technology implementation may be more widely accepted when staff are motivated and believe in the technology. A four-year period of time has elapsed, providing nurses with a true settling in period, during which BCMA has been part of their workflow.  Nurses new to the organization, enter into employment without options as to the adoption or use of the technology.  It would also appear that nurses with less experience have a higher level of satisfaction with technology, which  increase level of confidence possibly related to the safety mechanism offered through the use of technology.

Recommendations for future implementations of any computer technology would be greater preparation of staff to believe in the value of technology. This would lead to an increased level of acceptance, motivation and satisfaction. Inclusion of staff in pre- implementation planning with a high level of involvement may address motivation.