MTM: How has the Army medical community evolved after more than 14 years of war in Afghanistan and another 13 years of more intense conflict in Iraq? 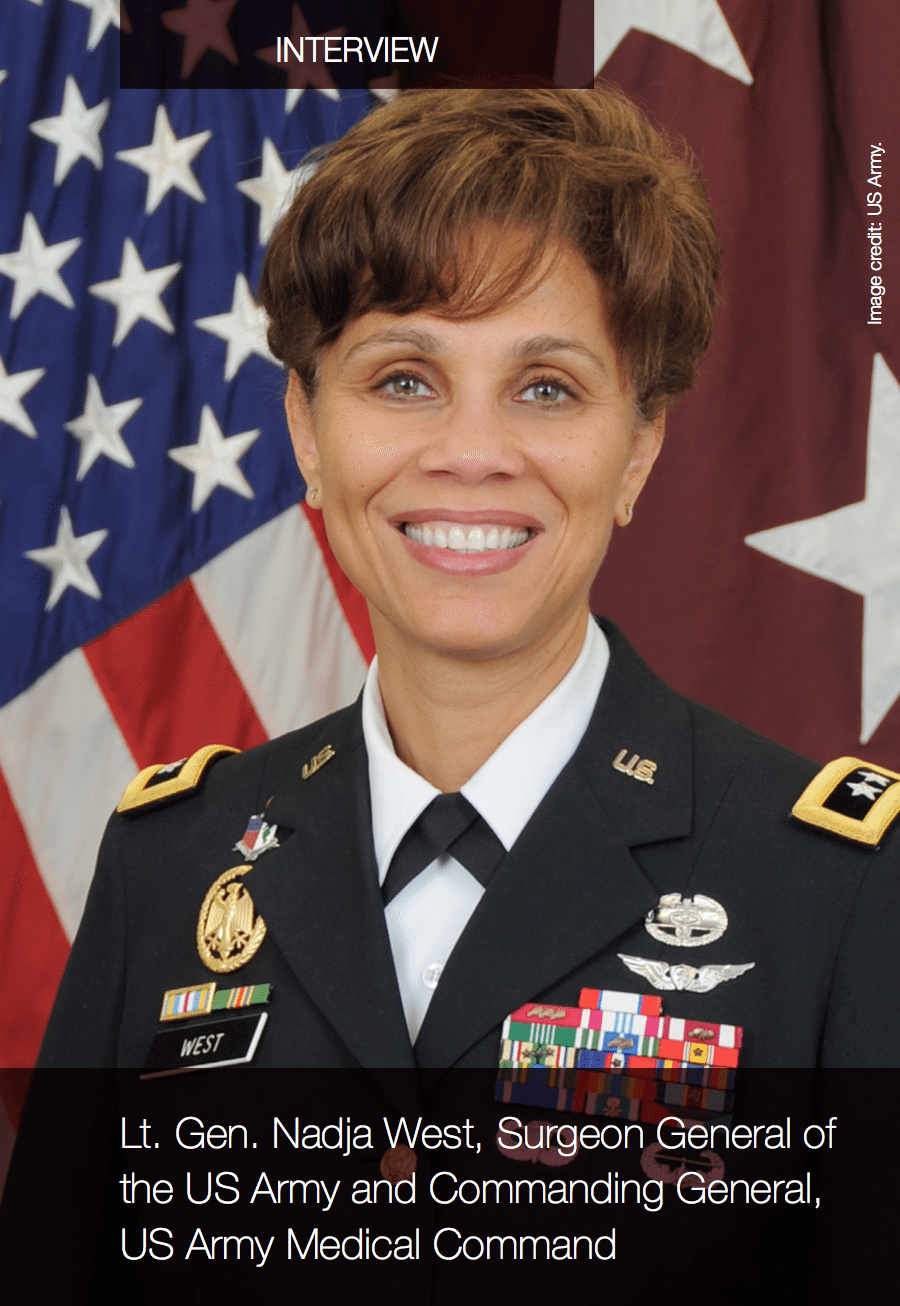 Lt. Gen. Nadja West: Famed astronomer Carl Sagan is quoted as saying, “Advances in medicine and agriculture have saved vastly more lives than have been lost in all the wars in history.” Ironically, war too has contributed to saving lives through advances in trauma care and medical innovations that have had a direct contribution to civilian medicine. Since World War II, the casualty survivability rate has increased from 70.7% to a high of 96.3% in the latest conflicts. This can be attributed to evolving continual improvements across the spectrum of clinical and military capabilities, to include training, technology, timely intervention, improved protective equipment, evolving doctrine and tactics, and clinical techniques and procedures.

A few of these advances and innovations include:

a. Forward Surgical Team (FST): This team is the most in-demand asset we insert on the battle eld, and they have directly contributed to the exceptional survivability rates over the past 15 years of combat. Based on lessons observed and learned during recent operations, Army Medicine is adding a Damage Control Resuscitation capability to our FSTs. To be renamed as the Forward Resuscitative Surgical Team, it enhances our capabilities to provide more responsive, agile support to our Soldiers.

c. Battlefield Trauma Innovations: Service members in today’s conflicts are now capable of surviving injuries that proved fatal in previous wars. Hemorrhage is responsible for 91.5% of potentially survivable battle field deaths. From 2001 to 2011, an estimated 24% of combat deaths occurred before patients reached a treatment facility; the major cause of death was blood loss. Below are four battle field trauma innovations that will enhance our current capabilities:

• Resuscitative Endovascular Balloon Occlusion of the Aorta: The DoD has spearheaded research, development, and FDAclearance of a rst-of-its-kind technique to control hemorrhaging from inside the blood vessel. A balloon can now temporarily stop blood ow from large blood vessels to the outer extremities while keeping intact the supply to vital organs.

• Freeze Dried Plasma: Freeze-Dried Plasma (FDP) provides a significant breakthrough by bridging the gap between far forward logistical and storage requirements and the need for essential blood products. FDP can be shipped in ruggedized containers and stored at refrigerated, or potentially, room temperatures and can be reconstituted in less than six minutes. FDP also reduces the need for large freezers and decreases waste due to product expiration.

• Spray-On-Skin: One promising project developed with DoD research support is ReCell® Spray-On SkinTM that enables treatment of injured skin using the patient’s own cells. When applied in conjunction with other therapies, spray-on skin accelerates wound healing, minimizes scar formation and eliminates the risk of tissue rejection.

• Coagulation and Blood Research: Platelets are life-saving, particularly when given early; however, they are typically not given prior to a casualty arriving at a Role 3 (i.e., Combat Support Hospital) facility because of storage considerations, including a short storage time limit. At present, up to 75-90% of platelets collected in theater are discarded because they expire before they can be used. Advances in platelet technology will triple shelf-life from 5 to 15 days, allowing forward use of this life-saving product and minimizing intra-theater use of transportation assets for medical resupply.

d. Virtual Health: Virtual health allows a remote physician to send patient information and receive diagnostic conformation from specialists anywhere in the world, even in a deployed setting. Currently Army Virtual Health provides clinical services across 18 time zones in over 30 countries and territories in more than 30 clinical specialties. In the future, virtual health will even be able to help medics save lives on the battle field.

e. Combat Casualty Care Research Program (CCCRP): The CCCRP is a joint effort between the Army and the Defense Health Agency, and serves as an integral part of the DoD’s continuously learning system of trauma care. Members of all service branches work on-site at various [Washington, DC] Capitol-area VA clinics, and beyond to pass along medical expertise and new training techniques learned from front-line combat scenarios in Operations Iraqi Freedom and Enduring Freedom.

MTM: What are some of the medical training lessons learned from these recent wars which are being integrated into your healthcare providers’ curricula?

Lt. Gen. NW: Recent conflicts have provided valuable data on patient outcomes most specifically related to battle field trauma, care of patients who are detainees, and the effect of multiple combat deployments on service members. This data has been analyzed and used to update existing training and create new curriculum. An example is the recognition, screening, and treatment of traumatic brain injury as well as the addition of detainee medical operations, content that had not previously been part of the institutional curriculum.

MTM: How is the Army progressing to improve patient safety throughout the system – from the point of battle eld injury to stateside medical treatment facilities?

Lt. Gen. NW: The Army continues to partner with the Joint Health Services Enterprise to improve upon and expand our culture of emphasis on safety and update our safety surveillance processes to ensure patient safety throughout the continuum of care.

On the MEDCOM staff, we have a robust Clinical Performance Assurance Directorate with subject matter experts in patient safety, quality and risk management, medication safety, evidence-based practice, credentialing/privileging, Joint Commission and Performance Improvement oversight. We have also recently added a General Of cer billet, Deputy Chief of Staff for Quality and Safety, to lead our efforts.

We have established the Patient Safety Reporting System at over 17 Tri-Service sites, and we do pre-deployment TeamSTEPPS training. TeamSTEPPS, which stands for Team Strategies to Enhance Performance and Patient Safety, is evidence based training intended to improve patient outcomes by improving team communication and teamwork skills. We employ a full-time Infection Control/Preventionist who develops and coordinates infection control policy. We offer an infection control deployment course which is given quarterly and serves as a foundational course aimed to teach attendees the principles required to minimize hospital acquired infections, specifically in austere environments.

To better align with Army safety efforts and the Combat Readiness Center, (previously named Army Safety Center), we established a MEDCOM Quality and Safety Center that will enable us to better investigate errors associated with patient safety events and apply lessons learned across Army Medicine in order to prevent them from occurring again.

MTM: Where might we nd learning technologies (from distance learning to manikins) used to train and educate Army healthcare providers?

Lt. Gen. NW: Today's healthcare providers, whether working on the battle field or in our medical treatment facilities including our medical centers, hospitals, and clinics, use a wide variety of learning technologies and simulation to create, build and sustain medical readiness. The Army's Product Manager Medical Simulation Of ce is responsible for advance development and fielding of medical training devices and simulation to Army Medicine.

MTM: How might the simulation & training industry better meet the Army’s requirements for learning technologies?

Lt. Gen. NW: Several gap areas have been identified in commercial off-the-shelf modeling and simulation. The largest gap is in realism. The drive for realism in simulation is much greater in military medical training due to the

unique requirements of our medical personnel operating in combat and other operational environments. One solution is to leverage virtual reality and pair its advancements in realistic tissue properties. Augmented reality is also promising since it can be more exible than other technologies (recon gured). We have yet to see human patient simulators or task trainers adequately assess the performance of the medical personnel. We still rely extensively on using a human to watch the students perform while making notes on a checklist to document the students’ performance. Even with the use of videotaping students’ performances, the systems are still not as reliable as we’d like.

Another area is in Inter-professional Education or team training. The Army is interested in more use of simulation to train and sustain (rehearse) teams for greater reliability in performance.

MTM: How is the Army collaborating with the other services and the VA to gain ef ciencies in healthcare training and education?

Lt. Gen. NW: We collaborate with our sister Services, Navy and Air Force, as well as other DoD agencies and with Veterans Affairs on a host of efforts including research, graduate medical education and patient care.

MTM: What about opportunities to collaborate and train on traumatic injury treatment, Zika and Zika-like epidemic control, and other challenges with the private healthcare sector and academia?

Lt. Gen. NW: Over the course of the past 15 years of conflicts, there have been a remarkable number of advancements in trauma care, including amputee and traumatic brain injury (TBI) care. Partnership with industry was essential in advancing prosthetic and orthotic technologies to achieve these results, such as clinical trials for upper extremity transplants and osseointegrated prosthetics.

A key training collaboration is the annual Extremity War Injuries Symposium, now in its twelfth year, which defines current knowledge regarding management of extremity war injuries for National Institute for Health, Congress, the Department of Defense, orthopaedic surgeons, researchers, industry, and other relevant governmental agencies.

Additionally, the Army is the lead Service for the National Collegiate Athletic Association (NCAA) – DoD Grand Alliance which focuses on concussion assessment, research and education.

Speci c to Zika, our scientists at the Walter Reed Army Institute of Research (WRAIR), along with our collaborators are moving rapidly to develop and test the Zika Puri ed Inactivated Virus (ZPIV) vaccine because this candidate vaccine was created at WRAIR with the same successful process as other licensed avivirus vaccines found to be safe, effective, and able to meet regulatory requirements of the US FDA.

MTM: How are training standards and credentialing evolving for Army healthcare providers?

Lt. Gen. NW: The Medical Command has a system called the Centralized Credentials Quality Assurance System which is a secure, electronic database operated by all three services, and is used to manage provider credentialing and privileging, malpractice claims, and adverse action investigations. The system affords us the ability to track the credentialing and privileging history of more than 170,000 military and civilian healthcare providers, including those in the Reserve Component. Army Medicine continues to meet or exceed industry standards for credentialing healthcare providers and in some cases is setting the industry and Department of Defense standards. One example is in the area of Sexual Assault Forensic Medical Examiners. MTM