A Tale of Two Young Pilots

This story is about two young Hong Kong nationals with a passion for aviation and a desperation to fly. As a previous CEO of both TAG Asia and Flight Training Adelaide (FTA), author Keith Morgan confesses a biased interest in their success stories.

I hold the view that, now and in the longer term, all sectors of the aviation industry have a responsibility to feed the industry “bottom up”. For pilots, Steven Young is answering the call. This article about TAG Asia’s Corporate Cadet Pilot Training Programme recognises the first two operational corporate pilots in Hong Kong to be developed in what I hope will be a long-standing cadet pilot support programme. Let’s hope others pick up the mantle and we see opportunities for aircraft maintenance engineers, flight attendants and others in the business aviation sector.

After high school, Billy Chan started work as a flight operations controller for the company that provides the Hong Kong-to-Macau helicopter shuttle. His immediate goal was to save enough money to travel to the US and complete a Commercial Pilot Licence. Three years of saving and at last he was off to the States to complete his CPL and Multi-Engine Command Instrument Rating (MECIR).

In 2008 Billy joined TAG Aviation Asia as a flight ops controller. His talent and work ethic saw him recognised for exceptional performance and promoted to middle management. He was in my office regularly, reminding me he was a qualified pilot and suggesting all sorts of ways to get him into the cockpit. Both Steven Young and I were very motivated to develop a career path for young local talent. So, having been convinced for some time that Billy had what it takes, I was able to find a crash buddy for him to go to FTA in Adelaide and complete the Cathay Pacific Transition Training syllabus in a Boeing 737 simulator. The condition – show me a score equivalent to the Cathay average, or at least be coming at it from below at a steep climb gradient. No surprise (well maybe a tad surprised and very pleased), Billy successfully completed the course with a higher score than the long-term Cathay average. The young team at TAG Asia were delighted with their peer’s success so far.

I thought it important to find a role that would allow Billy to consolidate his training with a reasonable flying rate, so I touted his talent to a major casino group in Asia. They supported the concept and funded a Bombardier Challenger 605 type rating and a position as junior First Officer in the group fleet. In the early days of TAG Asia (around 2010), casino aircraft had a much higher rate of effort than most other corporate aircraft. The majority of private jets in Asia hover around 200 to 300 hours a year; at the time, the casino jets were logging around the 600-hour mark.

Fortunately for Billy he was able to grow hours at a reasonable rate and his very solid performance as a professional pilot made him a most desirable, valuable and attractive commodity for local flight departments. He speaks fluent Mandarin and Cantonese, clearly has no cultural barriers and will not be a flight risk as many expatriate pilots seem to be. He’s a local, and we need many more like him.

To date Billy has accrued 3,000 hours flying time with 900 hours on the Challenger 605 and 1,800 hours on Gulfstream G450/550 aircraft. It is likely he will be awarded command in the next 12 to 18 months. How has he found the process and what advice would he give others wishing to follow in his footsteps?

“I think back about what I have done and what I have achieved. It was tough and a lot of challenge and of course a lot of mixed feelings like happy, sad and doubting, etc. In the whole journey from flight training in the States, Jet Transition Training in Adelaide, my very first Type Rating Training until I passed my first check ride in the Challenger 605, I realized all the effort I put in is absolutely worthwhile and memorable. But it doesn’t stop me learning and reviewing every time I complete a flight even now. I cannot stop thinking how lucky I have been and want to express my appreciation to my primary sponsor, Mr Steven Young, and to so many Captains who flew with me and taught me along the road. To become a pilot … yes, it needs passion and dedication. It can get you down when theory lessons keep you from flying. But never underestimate what you are capable of.”

Tinny Tse arrived in TAG Asia while I was working with the company. She was a junior in the Flight Operations department. She came across as very quiet and reserved but with a strong work ethic, enquiring mind and ambition to move up within the organisation. Tinny desperately wanted to fly and had applications in for cadet pilot programmes with the Hong Kong Government Flying Service, Cathay Pacific Airways and Cathay Dragon (then Dragonair). The disappointment of missing selection by all three did not dim her appetite to fly but the rejection refocussed her efforts in the short term. 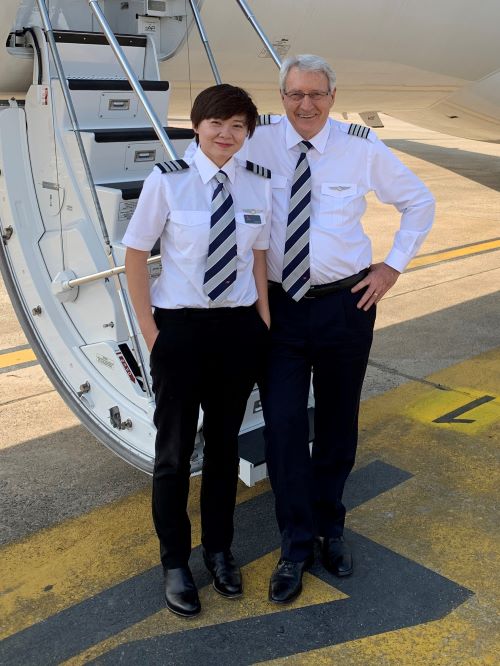 Tinny applied for and was given the position as Charter Broker Manger at TAG Asia. In this new role she continued to impress, demonstrating initiative and drive. She also continually reminded management of her desire to follow in Billy’s footsteps. Tinny saved her annual leave until an opportunity presented itself for her to go to New Zealand and work toward her Private Pilot Licence, which she obtained in 2013, with no detriment to her TAG role or to her clients.

In 2015 Steven Young began to look for another trainee pilot candidate for TAG Asia. Billy Chan’s success was all the encouragement required to continue the programme and to get the second cadetship under way. While Billy started with a CPL, Tinny only had the PPL. There was a mountain to climb now. She was off to FTA to attempt the Australian CPL and MECIR course and was to be embedded in a China Airlines-sponsored course training in Adelaide.

“I built strong bonds with my Taiwanese course mates,” said Tinny. “We smashed all the theory and flying in 10 months. Of course, there were many hand-wringing occasions where I thought I would never be able do this – but we’ve all been there, right?”

Tinny stayed the journey, always her own worst critic, until graduation finally arrived – what a moment for Tinny, her family in Hong Kong and of course her supporters in TAG Asia.

It was agreed the best way for Tinny to get hours in the logbook was to complete an instructor course and stay at Adelaide for a year or two. As most instructors will agree, this is where the real learning begins.

Tinny excelled as an instructor. She loved the flying and the role she played in developing other young professional pilots. And the students all loved Tinny. She logged a total of 1,855 flight hours in a two-and-a-half-year period: 1,394 hours single engine on the Grob G115 and Diamond DA40 and 461 hours on the Diamond DA42 twin-engine trainer.

In December 2019 Tinny returned to Hong Kong and TAG Asia. TAG had secured a Bombardier Global Vision course slot for her at CAE Dubai starting in January 2020. Her first corporate jet rating was completed soon after.

First Office Tse was back to HK and her family after almost four years living overseas. Her first flight in a Bombardier Global was with one of TAG Asia’s most experienced Client Aviation Managers, Capt. Mike Zahar. “Quality training is at the core of any quality organisation,” said Mike, “and Tinny reflects that. She now has a great career opportunity in front of her.”

And from Tinny: “I value greatly the opportunity given to me by Mr. Young. The unconditional support by him and TAG has built and strengthened a solid foundation for us to achieve higher. This year marks my 10th year with the TAG family, from Flight Ops to Business Development and now a professional pilot. TAG has transformed me into a well-rounded frontline aviator.” And her advice to those following: “Please remember you will struggle in various stages of the training. Embrace the struggle and be better for learning from your mistakes. Enjoy the flying journey.”