Electric-powered aircraft are now being viewed as a viable platform for pilot training and air transport. Robert W. Moorman looks at the rapidly evolving sector.

Makers of hybrid- and electric-powered fixed-wing aircraft, independent pilot training houses and airlines are investing heavily in what was once considered a wishful niche market.

United Airlines Holdings and its regional partner Mesa Air Group announced last year they would buy up to 100 19-seat electric-powered ES-19 regional airliners from Gothenburg, Sweden-based Heart Aerospace. Certification of the high-wing, four-motor electric aircraft is slated for 2026. With a projected range of 250 nm, this fixed-wing aircraft will complement the fleet of 50-seat regional jets flown by various regional partners of United.

Finnair, which is part of the Nordic Network for Electric Aviation, last year announced plans to acquire up to 20 Heart Aerospace ES-19s. Like other European airlines, Finnair wants to reduce its CO2 emissions by 50% by 2026.

Englewood, Colorado-based Bye Aerospace offers three all-electric powered aircraft for varying use. The eFlyer 2 is a two-seat primary trainer, powered by an 80-kilowatt electric motor. The company applied for type certification in April 2018 under FAR Part 23; certification is planned for sometime in 2024. Hourly flight operating costs of the eFlyer 2 are one fifth that of avgas-powered trainers, according to the company. Base price for the eFlyer 2 is $489,000. Base prices for a Cessna 172 Skyhawk can range from $360,000 to $432,000, depending on the avionics package, according to Cessna.

Despite the price differential, the eFlyer 2 and other electric trainers could one day supplant the Cessna 172, Piper Archer and the Diamond DA-40 as primary pilot trainers, in part, due to the projected lower DOCs (direct operating costs) of electric aircraft and environmental benefits.

[Note: In October 2021, Diamond announced the development of the all-electric powered eDA40. Cessna is also planning an electric 172.]

Bye is working with unaffiliated flight schools on developing training programs. Said company Founder and CEO George Bye: “We are also working with airlines, which have their own ab initio programs, such as KLM Royal Dutch Airlines. We see this as an emerging trend.”

The eFlyer 4, a four-seat advanced trainer and air taxi, will follow certification of the eFlyer 2 by 12-18 months. The eFlyer 4 has a projected extended range of 220 nm range due to the twice-as-large battery compared to the eFlyer 2.

The eFlyer 800, a twin-engine, eight-seat aircraft, is similar in size to the twin-engine Beechcraft King Air. A high-density, 12-passenger configuration is being considered. Launched in late 2021, the company projects a four- to five-year path to certify the 800. Powertrain for the eFlyer 800 will be Safran’s dual ENGINeUS 500 electric motors and GENeUSGRID system. Greensboro, North Carolina-based Jet It and JetClub, a charter operator based in Mexico City, are the launch customer for the eFlyer 800.

Bye has a backlog of 900 units for all eFlyer models, of which 732 are paid deposits. 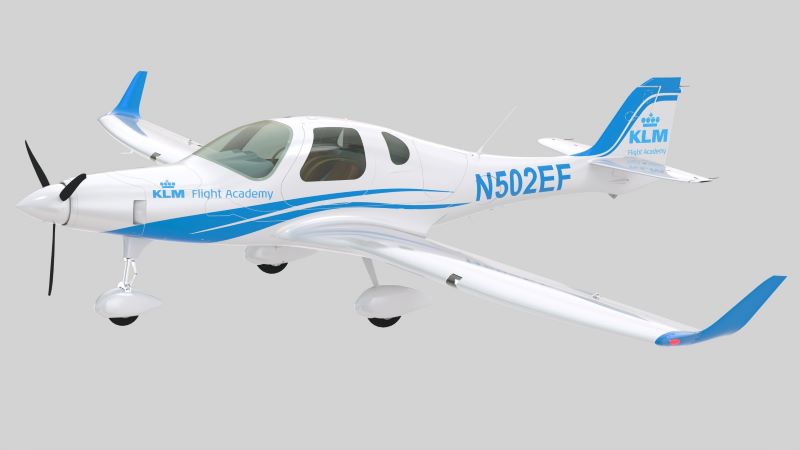 Two limiting factors of the current crop of electric-powered aircraft are range and speed. Bye Aerospace is meeting the challenge by matching the aircraft to the mission and combining proven and future technology.

“The conventional airplane wing, a classic proven design, has a tremendous advantage over a vertical lift (eVTOL) configuration in terms of aero efficiency,” said Bye. “The eFlyer’s lift-to-drag ratio is 18 as compared to a small fraction of that for a typical eVTOL. Therefore, the eVTOL design requires significantly more energy overall but particularly for the comparatively high-thrust takeoff and landing phases of flight.”

Long-haul electric-powered commercial flights are not possible presently. Yet that could change. Lithium Sulfur batteries, now being tested, could provide a significant boost in range.

“Lithium-Sulfur batteries are a real game changer,” said Bye, “providing another 100 to 200 watt hours per kilogram. “We’re working with battery providers on testing these batteries.”

Accredited universities are coming around to accepting and acquiring zero-emission training aircraft. The Florida Institute of Technology in Melbourne last year acquired its first electric trainer, a Pipistrel Velis Electro. The $190,000 aircraft, paid for by a grant from the Emil Buehler Foundation, is being used to train pilots and maintenance techs.

In June 2020, Ajdovščina, Slovenia-based Pipistrel’s Velis Electro, a two-seat trainer, became the world’s first electric-powered aircraft to achieve a type certificate (EASA.A.573 TCDS). The achievement has not gone unnoticed in the aviation community. The quiet (60 dBa) aircraft is powered by two battery packs, one in the nose of the aircraft, the second behind the cabin.

Pipistrel electric aircraft in development include the Nuuva V300, a long-range, large-capacity autonomous eVTOL air cargo aircraft. Eight battery-powered Pipistrel E-811 engines power the V300. The aircraft is aided by a triple-redundant Honeywell flight control system. The smaller Nuuva V200 is a lightweight freighter for carrying loads up to 20 kg.

Pipistrel too is developing a surveillance aircraft, the Surveyor platform, which can be configured for piloted or autonomous operations. High-altitude and longer-range flights will be capable with the Surveyor.

[Note: Textron is in the process of acquiring Pipistrel and plans to form a new business segment, Textron eAviation, focused on the development of sustainable aircraft.]

H55, a Valais, Switzerland-based company co-founded by engineer and pilot André Borschberg, designed the BRM Aero Bristel Energic all-electric two-seat trainer. The aircraft, which is in flight trials, will be commercially available by late 2022. If Borschberg’s name sounds familiar, it is. He, along with Bertrand Piccard, a pilot and psychiatrist, flew the sun-powered Solar Impulse 2 around the world over 14 months in 2015 and 2016, a 25,000-mile journey. The aircraft was painfully slow, with a 30mph cruise speed. Yet the flight was a seminal event in the advancement of zero-emission aircraft and propulsion systems.

With origins in Israel, Arlington, Washington-based Eviation is offering a twin-engine, nine-passenger, all-electric-powered aircraft. The “Alice” has a projected range of 440 nm and a 250 kts top speed.

First unveiled at the June 2019 Paris Air Show, the Alice has since been redesigned with a T-tail configuration, replacing the V-shaped tail. In addition, Alice’s two MagniX electric propulsion units (EPUs) are now mounted at the rear fuselage. Initial design had the engines mounted on each wingtip. FAA type certification is slated for the end of 2023. Launch customer DHL Express, a unit of German logistics concern Deutsche Post, has ordered 12 cargo-configured Alice aircraft. Deliveries will commence in 2024.

CAT asked Eviation for an update on its’ pilot and AMT training programs and received a terse official statement: “Eviation is not disclosing details of its pilot training program at this time.”

Other schools have not yet made the leap into electrics. Embry-Riddle Aeronautical University (ERAU) continues to use avgas-powered models. At present, ERAU has 74 training aircraft at its Daytona Beach campus, 45 at the Prescott, Arizona site. Asked why it is staying with conventional-powered trainers, ERAU provided CAT this statement: “The technology is not ready to support our operation (up to six two-hour activities per day, per aircraft (12 total hours), with 30 minutes between each flight). Battery strength and recharging is not suitable yet.”

FlightSafety International and NetJets, a charter and fractional ownership company, in March signed a Memorandum of Understanding with Munich-based Lilium GmbH that gives NetJets the right to purchase up to 150 Lilium all-electric eVTOL jets. FSI would provide pilot training and training solutions to support Lilium Jet operations. The Columbus, Ohio-based company continues to form training alliances with universities and trade schools regarding electric aircraft.

L3Harris’ offices in the United Kingdom told CAT that it did not have any firm plans to introduce electric aircraft into its training fleet.

Amping Up the Batteries

Commercial engine and aircraft manufacturers are investing in electric power. Rolls-Royce is using speed to help advance the business and environmental benefits of electric-powered aircraft. In November 2021, the engine maker’s single-seat, all-electric powered “Spirit of Innovation,” part of the Accel (Accelerating the Electrification of Flight) private/public partnership, broke the speed record for emission-free aircraft, achieving a top speed of 345.4 mph.

The Spirit of Innovation is based on the Sharp Nemesis NXT (Neoteric Experimental Technology) sport kit-built aircraft. Much of the funding comes from the Aerospace Technology Institute, in partnership with the UK government’s Department for Business, Energy and Industrial Strategy and Innovate.

Rolls-Royce also is building propulsion systems for a four-passenger eVTOL aircraft for the advanced urban air mobility market and a commuter aircraft for Norwegian regional airline, Widerøe. The engine maker is partnering with technology company Electroflight and YASA, a manufacturer of electric motors, part of Mercedes-Benz AG, to produce the powerplants. Rolls-Royce plans to invest $105 million in its electric propulsion business over the next decade. 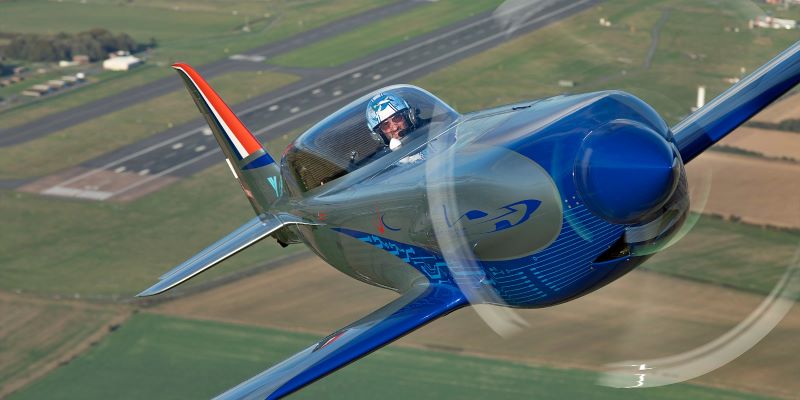 CAE is investing C$1 billion in R&D over the next five years around green technologies and the electrification of flight. The Montréal-based trainer and training solutions provider is looking to electrify part of its own training fleet as well. “We are looking at all elements of training on electric aircraft, beginning with a training needs analysis,” said Simon Azar, Vice President of Strategy, Marketing and Adjacencies.

Industry experts voice concern that while electric aircraft developers move toward certification, they have yet to develop pilot and aircraft maintenance technician training programs. Typically, pilot and AMT programs are developed in tandem with aircraft development. As the electric aircraft nears certification, these training programs are completed and delivered to the customer/operator or designated trainer. That doesn’t appear to be happening this time.

“I agree,” said Azar. “You need to have a training curriculum certified before the aircraft is delivered. And then you will need to have pilots who have gone through training before you start commercial operations.” He added: “Typically, the lead-time is quite long. It could be two to three years to develop and certify the training program.”

As part of these training programs, CAE will share its’ advances in artificial intelligence, virtual reality and mixed reality, as well as data analytics. Augmented and mixed reality training helps “resolve challenges facing these pilots, such as large fields of view,” said Azar. “It is also a way to have a more efficient training program while keeping the same level of fidelity and quality of simulation.”

Skellefteå, Sweden-based Green Flight Academy, which bills itself as the “most sustainable flight academy,” has two training facilities, one in Skellefteå University, the other at the same-named local airport. The academy offers a 20-month EASA-certified Airline Transport Pilot License (ATPL). Students go through 750 hours of instructor-held ground school and 250 hours of flight and simulator training. Much of the initial pilot training is done in the Pipistrel Velis Electro two-seat aircraft. Advanced flight training is done in the diesel-powered Piper Archer DX.

Iceland’s Reykjavik Flight Academy continues to expand its training fleet with the announced purchase last year of three electric Bye Aerospace eFlyers, with options on two additional Bye planes. The company’s principal officer, Hjörvar Hans Bragason, seemed to sum up for the industry the principal reason behind these acquisitions: "Investment in electric aircraft for training is a major step, both in the history of aviation in Iceland in general and as part of environmental initiatives that are currently taking place.”

R&D Mecca in the American Heartland