Randall Brooks, Vice President of Training and Business Development, APS, was interviewed by CAT’s Robert W. Moorman. Brooks has over 25 years of flight operations and training experience as a pilot, instructor and manager and is a past president of the UPRT Association.

CAT: Tell us about your involvement in Upset Prevention and Recovery Training (UPRT) and how this kind of training came about.

Randall Brooks (RB): In the late 1990s, there were several accidents that were determined to be survivable had the pilot been equipped with additional training. At the time, the Airplane Upset Recovery Training Aid was created. Boeing and Airbus led the effort, in association with 40 different entitles, including international airlines, NASA, FAA and other regulatory and academic institutions.

It was very thorough, some say too thorough, at 400 pages. The document was not distributed widely. So many pilots didn’t know it existed.

Loss of control became the leading cause of fatalities. It’s been as high as 48% of all aircraft fatalities.

In 2009, there were two accidents that brought loss of control accidents to everyone’s attention: Colgan Air Flight 3407, a deHavilland Dash-8-400, crashed near Buffalo, New York, and Air France Flight 447, an Airbus A330 from Rio de Janeiro, Brazil to Paris crashed into the south Atlantic Ocean.

Around that time, the Royal Aeronautical Society held a conference in London about expanding envelopes in flight simulation to address loss of control accidents. We noticed that these accidents were increasing in proportion to the total number of fatalities. That conference took place two days after Flight 447 crashed. But we didn’t know until 2011 that loss of control was the cause of that accident. The reason was that investigators had to fish the cockpit voice recorder (CVR) from the bottom of the Atlantic Ocean.

The Society created a standing committee to look into the cause of the crash of Flight 447. [Editor’s note: This also led to the International Committee for Aviation Training in Extended Envelopes – ICATEE – chaired by Dr. Sunjoo Advani. Brooks was co-chair of the ICATEE training working group.]

That movement was timely because in the US, there was similar interest into the cause of the Colgan Air 3407 crash.

In 2010, the FAA needed refunding from the federal government. Congress, in exchange for that funding, wanted several safety-related subjects addressed through rulemaking committees. One item was called the Stick Pusher Adverse Weather Aviation Rulemaking Committee (SPA-ARC). Congress learned from testimony that they had a serious loss of control in flight problem. Consequently, FAA reconstituted the ARC as the Loss of Control, Avoidance and Recovery Training (LOCART-ARC).

LOCART-ARC obtained the assistance of ICAO, which had been following the increase of loss of control accidents. ICAO lent their Montréal facilities to the ARC, if the committee would allow international authorities and others to contribute. That ARC began convening in 2014.

We continued to see loss of control as the leading cause of fatalities. APS CEO Paul BJ Ransbury and I provided the ARC additional testimony.

One ARC recommendation called for pilots to receive UPRT training in the actual aircraft prior to commercial licensing.

The ARC realized that there are limitations to simulating an upset. So ICAO, in 2015, based on recommendations from LOCART-ARC, ICATEE and other industry inputs, created Document 111, the Manual on Aeroplane Upset Prevention and Recovery Training. The manual presented a new way of training pilots and instructors, elements of aerodynamics, and what should be done in the airplane and simulator.

The FAA did not respond to the recommendations of their own rulemaking committee. EASA responded to ICAO’s recommendation to incorporate UPRT training before a type rating or prior to the issuance of an ATP license.

CAT: The current status on UPRT?

RB: ICAO knew it was impossible to train 160,000 pilots worldwide on aircraft. The better way to start training UPRT for commercial pilots was at the licensing level.

With regard to the FAA, the UPRT requirement was put in place in March 2020 to train all airline pilots in Part 121 operations. That’s been done. The FAA did not act on the recommendation for on-aircraft training for pilots prior to commercial licensing in a manner similar to what EASA has mandated.

The FAA requirement pertains to major and regional airline pilots only. Commercial pilots flying for Part 135 or Part 91 operations are not required to go through UPRT. And yet, the FAA for years has wanted to create one level of safety. They wanted to bring Part 135 up to the Part 121 standards.

CAT: Some industry observers say the Colgan Air Dash 8 was on approach and too low to recover from an upset. What do you think?

RB: The Colgan Air crash would have been 100% recoverable by a flight crew that had received comprehensive UPRT. UPRT-trained pilots would have likely prevented that accident from happening in the first place.

There is a philosophical debate among pilots that says we don’t need to teach pilots how to recover from an upset. We want to teach them how to prevent an upset from ever happening.

The mere process of providing UPRT requires the pilot to see the development of an upset and to learn how to recover. When you do that dozens of times, your mental model of the aircraft’s flight path changes. Prior to training, you assume that the airplane is like a railroad car. It’s on rails and most of the time it is. When pilots take UPRT, they see what the flight path would be in an upset. Pilots develop enhanced pattern recognition. Which allows them to see the development of an impending upset at an earlier stage.

CAT: Has your UPRT program evolved over time?

RB: It has. UPRT came from military-style aerobatic training. But that doesn’t transfer to transport category aircraft. So, it’s been an evolution in creating an applicable program. We have gotten more sophisticated over time. Our program contains a few important elements: the academic training provides foundational knowledge on how aerodynamics works in an upset; on-aircraft training also includes human factors and fills in the aerodynamic blanks.

There too is a benefit to using simulation for some training. Example: upsets that occur close to the ground, such as in a wake vortex encounter. We have no business doing that kind of training in an actual aircraft. But in a simulator, we can show pilots how to adequately recover.

Recently, APS ventured into the use of virtual reality. We can now take transferable skills into VR, such as crew resource management. We can have pilots practice in a cockpit-like environment that resembles the aircraft they fly at work. It is this integrated methodology that we’ve developed over the last 10-15 years.

CAT: Is UPRT different in a turboprop and jet aircraft?

RB: It is 85-90% common training. The physics and aerodynamics are basically the same, whether I am teaching King Air or 737 pilots. There is a slight difference in the acceleration characteristics. The jet will accelerate in a nose-down situation faster than a turboprop. And the actual upset onset parameters also might be slightly different. In our simulators here, we have the resources to simulate seven different classes of aircraft.

CAT: Do you provide supersonic training for commercial airline pilots?

RB: We do not. We operate two SIA-Marchetti S211 jet trainers for an upset prevention recovery role. We’re aligned with a company that has contracts with the US Air Force which gives us access to a supersonic platform if necessary.

RB: It would track the progression of flight training in general at the time. The Concorde came on line at the point where simulation was taking over the ability to qualify pilots without flying the actual aircraft. British Airways and Air France did provide their pilots some flight experience in fast jets with the Royal Air Force. There are some aerodynamic differences to be considered in supersonic flight. If those differences can’t be adequately replicated in a simulator, then that might require the need for an airborne asset. One could argue that decades of development in flight simulation likely make it easier to provide the necessary degree of fidelity for flight simulation. 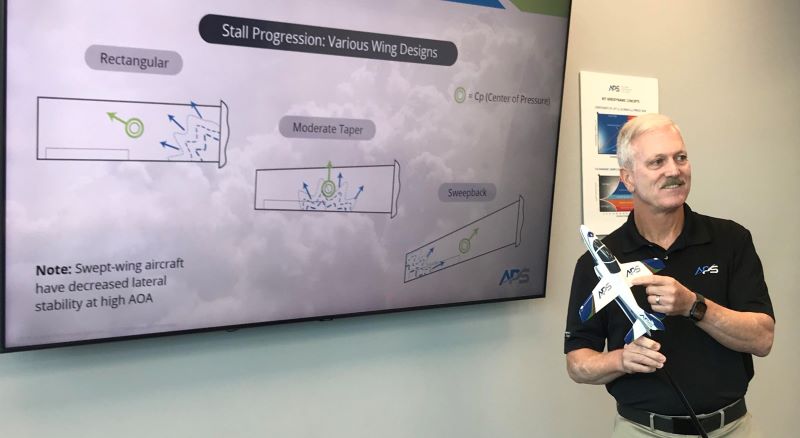 CAT: Do you contract with airlines, individuals, corporate flight departments?

RB: We deal with every sector of aviation, from government, military and flight schools to owner-operators, airlines and corporate aircraft flight departments.

For airlines, we generally assume the train-the-trainer role. We do that for Delta Air Lines and United Airlines and, most recently, Fiji Airways. In most cases, we train their subject matter experts in how to distribute the training down to instructors and line pilots. The instructor course takes a couple of weeks for on-aircraft training.

We also train 100% of US Army fixed-wing pilots at the CAE Dothan Training Center in Alabama. We’re a subcontractor to CAE in UPRT. Military pilots receive UPRT training with us at the unit level, typically in a Beechcraft RC-12 Special Electronic Mission aircraft (King Air) or Short Brothers C-23 Sherpa (330, 360).

One of the bigger components of our on-aircraft training is the corporate business sector, either Part 135 or Part 91. We’ve done UPRT training on the Gulfstream, Global Express, Challengers, King Airs and other business aircraft.

We also provide simulator-only training for some customers. But we’re up front about the limitations of that training.

CAT: What is your pathway to the business aircraft community regarding UPRT?

RB: There has been an industry outreach that we’ve done through NBAA. In early years, there was a walk-up pattern (of students.) We also outreach to business aviation through various organizations, such as Pacific Northwest Business Aircraft, Iowa Business Aircraft, North Texas Business aircraft and other associations. But the growth of UPRT training today is more part of a modern flight department with a safety management system which examines threats to their operation and finds ways to mitigate those threats. Loss of control accidents is the leading cause of accidents and fatalities in every sector of aviation that NTSB tracks.

CAT: Insurance companies have in a way become de facto safety advocates. They insist that airlines and business aircraft operators implement UPRT before they will insure the operation. What are your thoughts about this development?

RB: Yes, that’s happening. The USAIG Performance Vector program (part of the United States Aircraft Insurance Group) is partnering with APS to help pay a portion of the UPRT. APS recently partnered with Starr Aviation, one of the larger insurers worldwide. We’re still looking at ways to work with them.

RB: There is an under-appreciation by regulatory authorities and the traveling public that licensed pilots may not have the necessary skills to handle an upset emergency. It is a stark threat that exists today. In a couple of days of instruction, which includes four training flights and a simulator session, that threat can be fixed. It is a modest investment over the course of a pilot’s career to inoculate them against what is the leading cause of fatalities in every sector of aviation worldwide for over a decade.

R&D Mecca in the American Heartland