The civil aviation training industry continues its inexorable evolution, embracing new technology. Just not as fast as anyone likes, including many regulators. Rick Adams looks at some topics on the regulatory table.

Regulation, certainly in technology-driven industries, tends to lag the capabilities of the industry being regulated. Sometimes far behind. A few operators opt to apply innovative technology and techniques beyond the regulatory confinement, but the regulation must always be the baseline, to the detriment of progress.

Aviation training is going through a slow-rolling sea change, just beginning to implement some new regulations which have been in development for several years or more, such as upset prevention and recovery training (UPRT) next year – effective March 12, while ramping up to the radical shift from classic hours-based pilot training to competency-based training and evidence-based training. Still to come, despite the adoption by the International Civil Aviation Organization (ICAO) of Document 9625 Edition 3, the Manual of Criteria for the Qualification of Flight Simulation Training Devices (FSTDs), nearly a decade ago and Edition 4 in 2015, the US Federal Aviation Administration (FAA), the European Aviation Safety Agency (EASA), and other National Aviation Authorities (NAAs) are still a year or more away from updating 20-year-old regulations governing so-called lower-level flight training devices (FTDs). And with the rapid advancement of virtual reality, mixed reality, holograms and other content delivery devices which can readily be applied to training, how long before these are considered and deemed eligible?

“There’s a lot of regulatory change going on at the moment and getting the alignment with ICAO 9625 for EASA and FAA is an uphill struggle,” Mark Dransfield told CAT. Dransfield is director of Regulatory Affairs for TRU Simulation + Training and until recently was chair of the training devices workstream for the International Pilot Training Association (IPTA). “It’s long overdue. With EASA it is starting to happen. But there are many other things that need to be done and trying to get attention takes a lot of doing.”

Indeed, at the European Airline Training Symposium (EATS) in November, new EASA Flight Standards director Jesper Rasmussen noted that with drones, new aircraft types, performance-based navigation (PBN), the single European Sky ATM Research (SESAR) initiative and other complicated matters on their task list (not to mention the UK Brexit exodus), “the perception in EU states is that EASA is changing too many rules too fast,” and they are being asked to “cool it, slow down.” 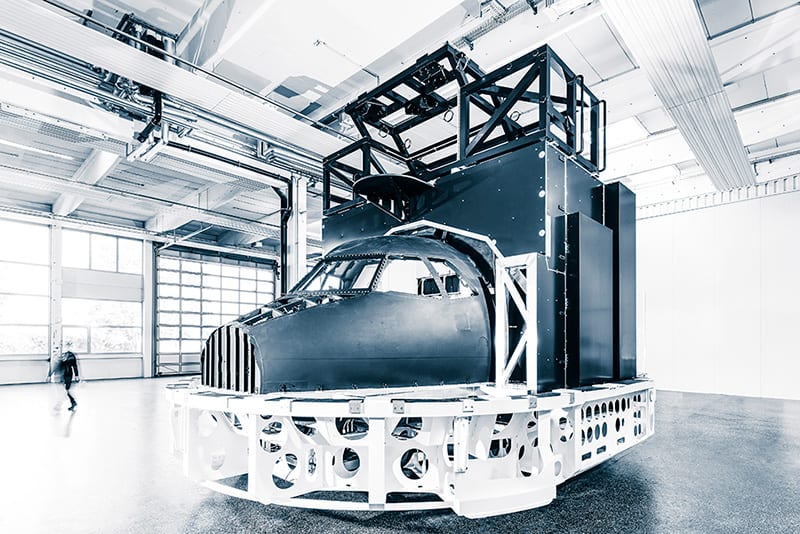 Aviation training is beginning to implement new regulations which have been in development for several years or more. Image credit: AXIS Flight Training Systems.

The Drive to Competencies

Captain Tilmann Gabriel, Executive Chairman of the IPTA, said, “This will be a big challenge to get introduced to the regulators monitoring it. Everything will be governed by these new Annex 1 regulations. What I am worried about is this dual challenge: one is the lack of pilots, the other is introducing a completely new educational norm changing our pilot licensing. It’s a challenge for everybody but especially for countries that have a huge growth like India, Africa as a whole, maybe China.”

“Competency is an education norm in any profession that you train,” said Captain Gabriel, who is also director of the MSc Aviation Management Programmes at City University London. “We’re changing to that now as a pilot profession from traditional knowledge transfer and testing. It is a dramatic revolution of our industry. We finally get cognizant of becoming a pilot as a professional objective.”

“This has been my fight for a few years now. We want to get out of this tick-the-box,” said Captain Jean-Michel Bigarré, head of training, Airbus Training Services. Airbus was a pioneer in implementing competency-based training (CBT) when introducing the A350 XWB aircraft in 2014. Last November, the Toulouse, France-based aircraft manufacturer incorporated CBT into their A320 and A330 curricula.

Captain Bigarré acknowledged that regulators around the world have been slow to make the transition. So Airbus is spreading the gospel of CBT through the Airbus Standard Training Reference (ASTR), created two years ago. The ASTR is approved by EASA and is compliant with regulations in the US, Brazil, China, India and Singapore. “We find some pilots who are not at an adequate level. There are many differences within the same certificate; one pilot can be exposed to twin engine, another only single engine, which does not match the competence.”

“We implement a minimum level everywhere, and this has been very well received with the authorities,” added Susannah Crabol, Airbus Training Services marketing manager. She said with the increase in the pilot pipeline and greater diversity of backgrounds, they were noticing competency inconsistencies around the world. This triggered a re-design of the type rating and jet orientation course / multi-crew cockpit cooperation modules, plus new instrument rating reinforcement and multi-engine exposure / reinforcement modules for remediation, if necessary.

“These intermediate optional modules have been designed to allow an adapted curriculum with the opportunity to re-instill or reinforce the fundamental skills and competences of the pilot, ensuring the basic handling skills as well as knowledge, skills and attitude are implemented and reinforced as necessary, to reach the Airbus standard, before moving on to the next stage in flight training (type rating),” Crabol explained.

The two new modules were incorporated simultaneously with the A320 and A330 CBT programmes, taking advantage of other aircraft configuration-related curriculum design changes mandated by EASA.

Branded as “CAE Rise”, the Montréal-based company calls it “the first commercial offering of its Next Generation Training System strategic initiatives.”

“Training programmes today are time-based, and a lot of time is spent on things we believe can be altered to make them useful to the pilot,” Leontidis told CAT. “We think leveraging data to assess pilot performance more objectively is an excellent enabler for higher-quality training. “The instructor can measure human factors and crew resource management. And that data can then be aggregated and compared to allow the airline to focus on weaknesses. Ultimately this mission of training is all about making sure the pilots are strong in all the manoeuvres and emergencies they need to be good at.”

Using simulator-generated data, the CAE Rise system provides measurement of pilot / flight crew adherence to standard operating procedures (SOPs) plus testing and scores on every manoeuvre required in a training session. “We’re measuring against an ideal set of criteria,” said Leontidis. “In today’s training, the instructor has to monitor the technical skills and the human factor skills. In this new system they will be able to monitor human factors and the system will provide the scoring they need to assess the technical skills.”

The data is focused on each aircraft type but not the individual pilot. “That brings a bunch of other complications with it,” the CAE leader suggested.

L3 Commercial Training Solutions vice-president of Training, Safety and Compliance, Colin Rydon, said, “Rather than separated practical and theoretical training with one-off test points, competency-based training requires the continuous and holistic development of the pilot, with multiple assessments of the individual pilot’s standards in each of the wide range of airline-required competencies.”

“While competency-based training has been enabled by ICAO for over a decade,” Rydon added, “the recent increase in the number of multi-crew pilot licence (MPL) courses and the introduction of CBT regulation in other phases by a number of national authorities, including EASA, heralds a safer era with more effective training and data-responsive course design. We anticipate that the wider industry transition will be progressive over the next decade with the role of international regulation playing a critical role in this timescale.” 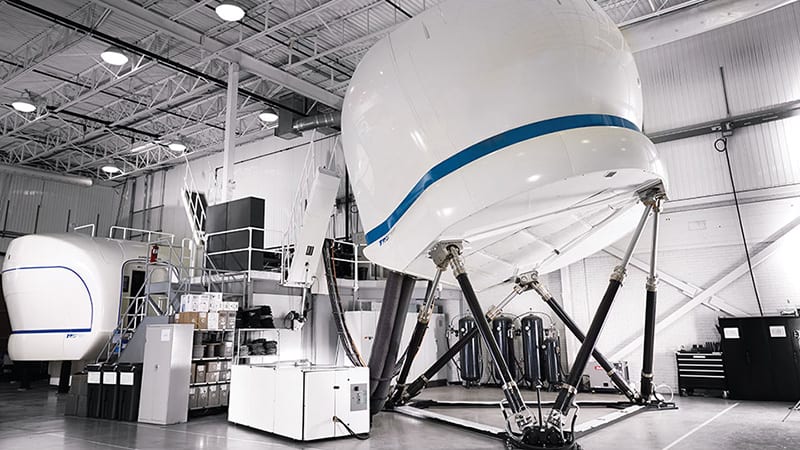 Many companies would like to see the adoption of mutual recognition practices for simulator qualification. Image credit: TRU Simulation + Training.

“Currently there’s a common process for full flight simulators between ICAO 9625, EASA and FAA Level D – all very well aligned,” said TRU’s Dransfield. “The FTD is a completely different story; Europe and America don’t even call the devices by the same name” (in EASA parlance, flight and navigation procedures trainers – FNPT). “The flight training device regulatory market needs an overhaul. What we have today is low-level device definitions based on old technology standards. Different qualification levels intended for different purposes.”

“We have a lot of very innovative manufacturers in the world producing some really good devices, but you cannot put them in any of the holes in the regulation to qualify them appropriately for what they could be used for. We have devices that far exceed the qualification of anything that is in the low-level regulations, and you can’t necessarily get credits for them if you go by what’s in the regulatory documents.”

Dransfield predicted that virtual reality and other emerging technologies, coupled with the speed of 5G telecommunications services, “will open Pandora’s Box of a whole new world of flight training devices. All will be capable in one way or another, and we need to find a way to understand how we use them and how we regulate or accept that they can do what they do.”

At the EATS conference, Andy O’Shea, chairman at the Aircrew Training Policy Group (ATPG) and deputy chief Pilot for Ryanair, said, “FTD credits need to be addressed before we even start talking about virtual reality.”

L3’s Rydon agreed: “It’s key that regulations enable innovation and use low-level devices to support a progressive training and assessment system, based on the device’s characteristics to meet and support the training requirements. As training device technology continues to advance, it opens up the opportunity to further increase the flight task areas of operations that can be offloaded from full-flight devices to fixed training devices. Such offloading can provide equally effective training at a lower cost.”

“We have to keep trying,” Dransfield concluded. “If we stop trying, nothing will change and we’ll still have outdated low-level device standards.”

Dransfield and others would also like to see adoption of mutual recognition practices for simulator qualifications. “There’s a simulator in Singapore that has 10 different qualifications from 10 different countries. For one sim you have to block 20 days for 10 different authorities; that’s a lot of training time you’re losing. It makes no sense to me why we can’t, as an industry and a community, find a way to recognise each other’s qualifications to a consistent standard.”

“Mostly the examiners are ticking all the same boxes over and over. Some make a lot of comments, some make no comments, and some make comments about things that arguably aren’t relevant to training. There’s a huge variation of standards of what is done and how it’s done,” the TRU director stated.

Francis St-Louis, who led strategy and business development at HAITE Aviation Training Singapore before joining Rockwell Collins as Principle Strategic Development manager, said, “It is frustrating and these qualifications come at a cost, which drives the cost of training up. People in the industry are arguing for harmonising regulatory authorities or some organisation that can do that.”

“It would be beneficial to both simulator manufacturers and operators if an independent, international certification standard were developed,” said Harald Schneider, head of the Aeronautical Department for Swiss-headquartered AXIS Flight Training Systems. “Although the authorities only differ slightly, global standardisation would be simpler, and would particularly be beneficial to newly industrialised countries, as standards would be raised simultaneously across the board.”