We use cookies to provide you with a better experience. By continuing to browse the site you are agreeing to our use of cookies in accordance with our Cookie Policy.
Home » Improving Research Efficiency and Productivity by Conducting Multiple Studies Concurrently With Immersion Medical Training

A novel approach to training and research is provided in this study conducted by Brandon Noyes, Chris Calvano and Anthony LaPorta.

Research is vital to the improvement of tactical and medical equipment and training. By conducting immersion simulation training, multiple research avenues may be pursued simultaneously. Rocky Vista University has worked with Strategic Operations Inc., California Federal Fire Department, and First Light Corporation to conduct a week-long immersion surgical simulation training in San Diego, CA. The lifelike simulation, from point of injury through emergency room and operating room, allowed for absolute control of multiple variables while still allowing for the surprise elements of real life tragedy (Hunt et al., 2012). Three studies were conducted simultaneously over the course of the week: surgical competencies, stress adaptation as measured by salivary cortisol and amylase and tactical lighting in surgery.

Numerous studies report that the quality of surgical education has deteriorated over the last two decades for a variety of factors, including (1) the demise of the Halstead paradigm of residency structure; (2) medical errors (the Institute of Medicine 2000 report To Err is Human: Building a Safer Health System found that up to 98,000 people die each year in US hospitals from medical errors - updated in 2013, this figure could be as high as 440,000), effectively ending the “see one, do one” era of surgery training on a live human due to its inherent randomness and ethical issues; and (3) the mandated work-hour restrictions introduced in 2003 that resulted from the 1984 death of Libby Zion, a patient at a New York hospital, that raised an issue of resident exhaustion. As a result, surgical residents in general are getting less surgical experience, confidence levels are decreasing, certifying examination pass rates are falling, and the quality of patient outcomes is deteriorating. This gap in training adequacy is being filled, less than adequately, by activities such as fellowships and the rise in simulation as an even more critical part of medical training activities (Hoang et al., 2013 or 2014).

It is too late to fix the problem at the post graduate level. By then doctors have had to certify that they are confident and competent to perform a certain number of items defined in a surgical case list, before going out into the world.

Our goal is to introduce perfect practice - before medical students stand over a human with a scalpel. We wish to create a realistic, fully immersive surgical environment (including emergency room, operating room, and post-op) where repetitive, scenario driven training can be done in a challenging, often chaotic, but safe manner, on realistic human-worn standardized patient surgical simulators, where individual and team skills can be practiced, and where fully instrumented simulators allow for post-op assessment and debriefing (Lipshy and LaPorta 2013)(Figures 2 and 3).

If an image of fighter pilots in aerial combat training - integrating flight simulators and aircraft - comes to mind, the analogy is correct: there needs to be a Top Gun of surgery; and a simulation environment so realistic that a medical student's first surgical experience on a human should be with no less confidence than the last surgery on a realistic human patient simulator.

Since the end of the "see one, do one, teach one" era (the "Halstead method"), physicians in training have had significantly less hands-on experience. Success is often born of failure. Being allowed to make mistakes - to fail - is no longer permissible in surgical education, for obvious and good reasons: patient safety. But it has the unintended consequences of loss of long-term training.

The US military over the past few decades developed a system of training that recognized that only by being allowed to make mistakes - and learn from them - could true learning be achieved. The military created Combat Training Centers (CTCs) at Fort Irwin, California and Fort Polk, Louisiana for ground combat training (the Top Gun school for aviators serves the same purpose) based on five principals: (1) provide a realistic setting; (2) allow trainees to fail; (3) face a credible opponent; (4) have objective assessment of performance; and (5) allow trainees to remediate mistakes. While these principals may seem simple, and maybe even obvious, the CTC training system incorporating them sets the US military apart from all other militaries.

We have used the same scenarios in conjunction with the light and stress research to train 63 second year medical students to become proficient on dangerous emergency procedures before ever attempting to do so on a human. The results of post-immersion training competency evaluations on these procedures showed passing rates of nearly 100% in all areas (Figure 4). Due to variation in the testing format between the first year and the subsequent two years, only the last two years data are shown in Figure 4. An even more stunning statistic is that of cognitive knowledge. 61 of 63 passed the equivalent of the eight week surgical exam in only 4.5 days, a failure rate of 3%. These are the same two people who had the most technical failures, and who also failed the regular junior rotation in surgery. 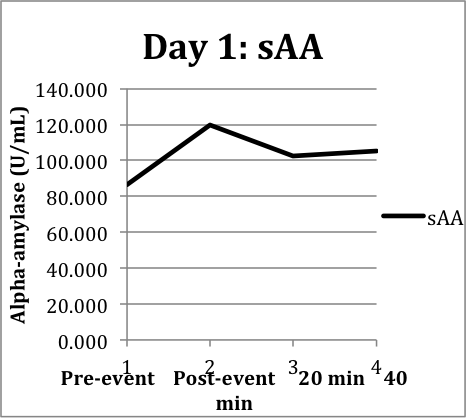 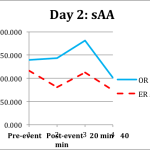 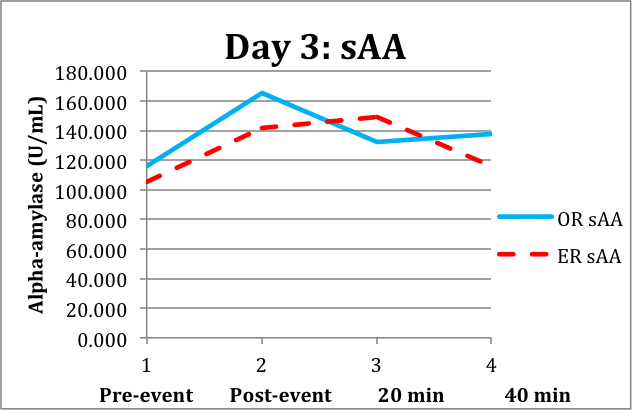 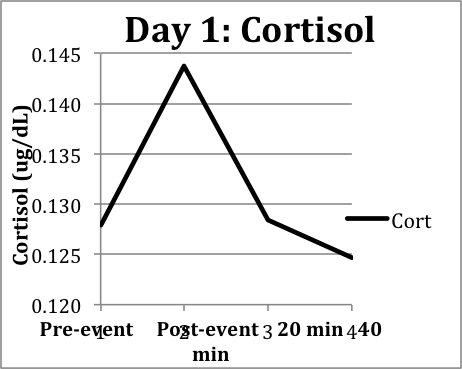 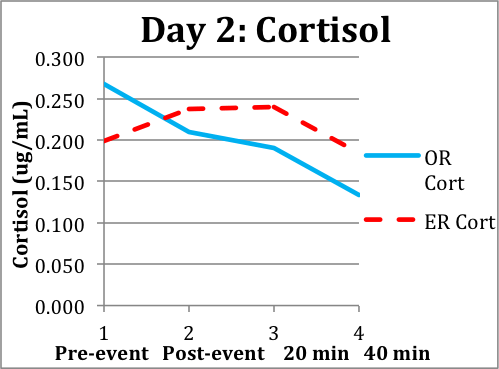 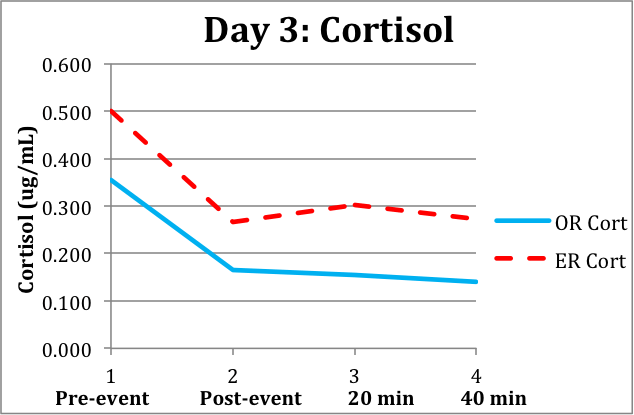 During these scenarios, salivary alpha-amylase (sAA) and cortisol levels were measured over a week-long period to observe if immersion along with surgical training would result in habituation (Mueller et al., winter 2012). During the day 1 scenario, sAA reactivity and recovery were seen in both operating room (OR) and emergency room (ER) roles (Granger, 2014). When compared to day 2 and 3, day 1 baseline sAA levels were much lower. This data suggests that during succeeding scenarios, students mounted a higher parasympathetic response. During day 2 and 3 scenarios, OR roles showed higher sAA reactivity and levels as compared to ER roles (Figure 6). Cortisol levels on day 1 show a post-event spike which was anticipated due to normal physiologic response to stress. Day 2 and day 3 collections show higher baseline cortisol levels which may suggest an anticipatory response to the stress (Figure 7). Students were first exposed to a scenario the day before, so a higher cortisol baseline can be a proper ANS response in anticipation of subsequent scenarios. Cortisol levels in the OR role show a decreased level at post-event collection which suggests a lower stress response. This can be due to increased confidence and focus during subsequent scenarios. Lower levels seen in OR roles compared to ER may be due to the focus on surgical technique over emergency room training.

The data show that students were exhibiting autonomic nervous system (ANS) reactivity with minimal hypothalamic-pituitary axis (HPA) reactivity. This suggest that students were able to react to the challenges by increasing focus, attention, cognitive function, and executive function to successfully complete the tasks as opposed to becoming stressed and exhibiting increased negative effect.

A full and complete analysis of the salivary data is currently being conducted. It is interesting to note that although the hormones may not show as much habituation as was anticipated, student performance has increased (Mueller et al., summer 2012). This indicates that while the physiologic response may still be heightened throughout the course, outcomes as measured by student competency assessment are not negatively affected at all.

Human vision has evolved to have the highest retinal sensitivity to light in the green (around 550 nm) wavelengths of the visible spectrum. Within the retina, specific light-sensing cells, called rods, are dedicated to dark vision while cones are programmed for color vision detection. The highest density of cones is in the macula, which comprises our best central vision and best visual acuity (20/20 or better). The retinal periphery is dominated by rods, which have a best acuity potential of about 20/200, but possess a much better ability to detect light versus the cones. Specifically, rods are insensitive to long wavelength visible light (red).

When dark-adapted, the Purkinje shift describes a change in sensitivity favoring blue light detection. However, there are times when we need both photopic (light sensitive) and scotopic (dark sensitive) retinal systems to be active. Tactical environments include aviation, marine, and nighttime field operations. In these cases it is key to preserve dark adaptation. For example, a rotary wing crewmember needs to scan the skies for incoming fire and still maintain the ability to read and complete medical procedures in the cabin. The advantages of red illumination are lost when the visual target is blood. While dim red lighting preserves dark adaptation (and thus facilitates reading by stimulating some cones/photopic vision), the ability to detect red blood is compromised.

While white light is best for both contrast sensitivity and best acuity, it also poses the risk of easy detection by enemy observers in tactical situations. Red, blue, and green single hue illumination has been used in various degrees of success to reduce the visual footprint of operators while still facilitating complex vision dependent tasks. We have proposed a rational illumination hue selection based upon the tactical environment and the desired task (Figure 1).

Previous studies and our current report support the use of blended red-green light for blood detection as a superior technique to white, blue or green (Calvano, Enzenauer, Eisnor, and LaPorta, 2013). Clinically, ophthalmologists employ “red-free” light (essentially green filter) when viewing the retina to enhance detection of small hemorrhages from diabetes and vascular disease. The addition of a specific red wavelength to the green allows enhanced contrast sensitivity, maximizing scoptoic and photopic vision and accurate task completion

As part of our recent tactical medical simulation event, a number of studies were conducted assessing visual needs for care providers. At the conclusion of the week-long event, an online survey was made available to participants. We present the most salient responses in this report.

Of 23 respondents, 16 stated that vision issues interfered with task completion versus seven who reported no vision related impedance of tasks studied. Similarly, 17 of 23 responded that lighting issues interfered with medical task success versus six who stated no difficulties. The survey then asked which light sources were preferred in the three main testing scenarios: 1) surgical suite simulation, 2) assessment of hemorrhage on multi-cam uniforms, and 3) assessment of specific color hues in controlled illumination simulators. Of 27 responses, with a p-value of less than 0.01, 16 preferred the red-green blended light in the operating room, while one had no preference, and one each preferred white and blue light, respectively (eight responders did not participate in that simulation, Figure 5). For the hemorrhage on multi-cam detection scenario, 7/25 responses did not participate in the study. 16 favored the red-green blend versus one each for red and blue and none for white light. Similarly, of 24 responses concerning the controlled illumination simulators (five non-participants) the majority (15) preferred red-green blended light against one for blue and three with no recollection of a preference.

Conducting multiple research studies concurrently with immersion training of medical personnel can help to improve medical care via a myriad of avenues. Examples of the efficiency of this method are: maximized cost-effectiveness, control of variables while still allowing for life-like human tragedy, and increasing exposure to real-life scenarios while maintaining a large safety margin. 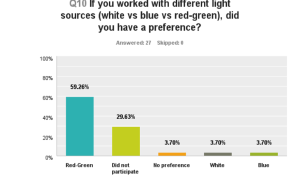 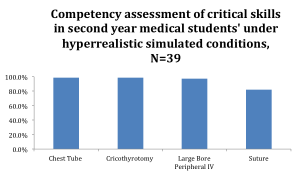 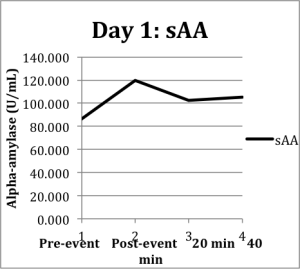 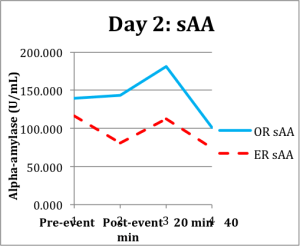 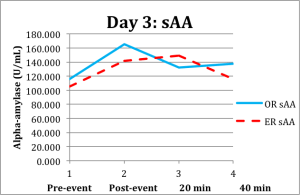 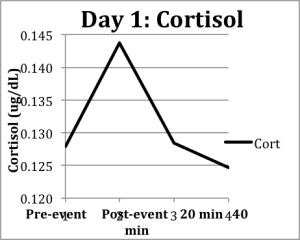 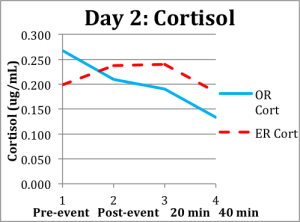 Brandon Noyes is a third-year medical student at Rocky Vista University College of Osteopathic Medicine. He is a recipient of the Health Professions Scholarship Program from the Navy and is prior service enlisted active Army.

Caleb Hudspath is a third year medical student at Rocky Vista University College of Osteopathic Medicine. He is a recipient of the Health Professions Scholarship Program for the United States Army.