XR and other training technologies are lowering the barriers to entry, but how do enterprises ensure wheels are not being reinvented and innovation can be accessible to all? MS&T Special Correspondent Andy Fawkes spoke to Dynepic to learn about their DX platform, their work with the USAF, and how barriers to innovation in training can be broken down.

Militaries around the world are seeking training capabilities that are more flexible to trainee needs, agile in response to changing operational and equipment demands, and more efficient to reduce the time to train.  Taking the training to service members, to the point of need, can help to achieve these outcomes.  Further, by capturing and analysing training data, better informed decisions can be made about training efficacy. Military decision makers also need to consider the latest generation of young service members and their learning styles.

The Rise of XR

Against this backdrop of training requirements, current day advances in extended reality or XR are leading to a new wave in training innovation of flexibility, agility, and efficiency.  Highly capable game engines with large user communities have at the same time lowered the barrier of entry for developers and designers to rapidly create immersive and effective training experiences and deploy them across devices at the point of need. XR is hence finding an increasing role in military training and also in many other safety critical training applications.

At an enterprise level however, this expanding multitude of XR-based innovations can lead to recreating the wheel over and over, for example, through costly content duplication and proliferating learning dashboards.  Further, training data is siloed, decreasing its overall value or not accessible for security reasons.  Crucially, how do students and instructors discover and download XR applications securely and then share their experiences with their peers? 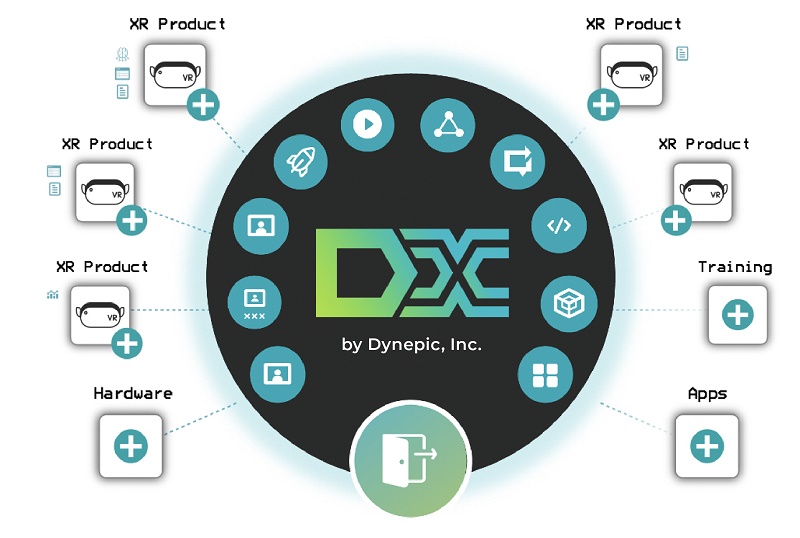 The challenge of bringing disparate systems together in a secure manner was the inspiration behind Dynepic. Krissa Watry is CEO and Founder of Dynepic, Inc., a USAF veteran and space systems engineer. Taking what she had learnt from space systems and applying to earthbound systems was in response to the next wave of technology innovation driven by the Internet of Things (IoT) and increasing connectivity.  The CEO told MS&T that she was inspired by the problem of “how do we create a secure framework that allows for disparate systems to come together and protect the user's data while we do that”. That challenge formed the basis of DX’s development since the company’s founding in 2014. The first DX platform white-label launched as playPORTAL in 2018 for the kids' and family market and as such had the hardest privacy market requirements.  Vendors hosted on the DX platform can “speak the same language” Watry told us and as a digital infrastructure “it's completely software and hardware agnostic and it creates low-code building blocks that allow folks to rapidly activate secure, privacy-compliant products into the ecosystem”.

In 2019 an opportune convergence took place where the USAF knew that they had to find a way to bring their XR technologies together and the AFWERX Mixed Reality Challenge provided an opportunity for Dynepic to showcase their DX technology.  Against stiff competition, Dynepic won and went on to provide the secure digital infrastructure to support an open immersive training ecosystem for the USAF.  DX has been white-labelled for USAF use as MOTAR (Member-Operations-Training-Analytics-Reports) and brings together USAF XR training tools on a secure vendor agnostic platform.  Through a single-sign-on, MOTAR gives users access to a live learning dashboard and hub of reusable digital assets, allowing users to launch applications across all types of XR and non-XR hardware while at the same time recording student performance.  The take up of MOTAR has been swift.  Watry told us “we have over 20 XR vendors in our main MOTAR ecosystem that have been approved by the government and we have another 30 or 40 asking for activation”.

Dynepic is working to make the user experience seamless for users, developers and purchasers alike.  One of the challenges has been learning management systems (LMS).   Watry told us “traditional learning management systems of 1990s cannot just be retrofitted for XR, they have to support the unique infrastructure of an app store and how apps are launched and I think our DX platform solves some of those complexities”. Also important for DX’s seamless operation is working with partners like Unity. “When I was meeting with the toy companies, they said 95% of their applications were being built with Unity and so now Unity is one of our main SDK's” Watry told us.  Dynepic’s Arthur Goikhman explained that he had been working with Unity for over a decade and its extensibility and plugin architecture is key.  "Everyone knows Unity is a great tool for creating content, but with our Unity SDK developers can quickly integrate training with MOTAR’s LMS, allowing the Air Force to view consolidated student performance data." Dynepic is also looking hard at the purchasing experience and Watry gave an example “so if you're a military unit who wants this training, how can you actually swipe your unit’s government purchase card and procure that tool?”

CEO Krissa Watry has always had great ambitions for her company and is aiming high; “when I look at industry, the big players that emerge are the ones that actually start creating the glue that starts pulling everybody together”.  “I think the same reckoning is going to happen on the military defense innovation side, they're going to have to realize that the government is asking for a modular open systems architecture. They don't want siloed technologies; they want a collaborative ecosystem” she continued. “And key to the ecosystem’s success is that we don’t compete with the content-creators.” Dynepic invisions these changes will take place over this decade and by taking an open platform approach it will enable all users to easily plug in and participate. This offers the potential of opening up training to more innovative approaches and further reducing the barriers to entry.  Watry foresees that developers will be able to develop content in say Unity and with the DX SDK “they’re going to be off and running as it's already hooked up into the ecosystem and they can create content whether they are a tens of millions of dollar company or a single developer. They can operate on the same level and that's what gets me really excited”. 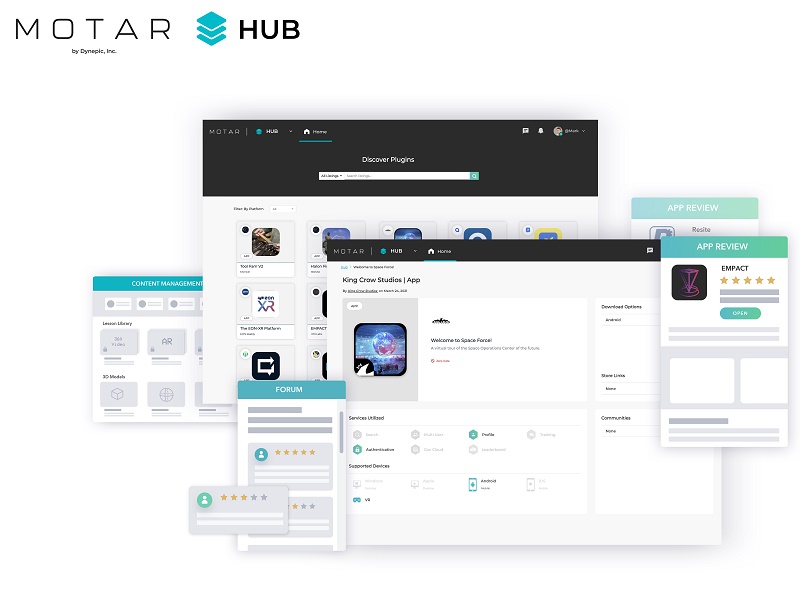 The Hub extends the DX Platform to include a far greater range of content including AI agents and 3D models enhancing MOTAR’s discovery and sharing capabilities. Image credit: Dynepic

The next development for Dynepic and the DX Platform is the “Hub” due for launch April 2021.  The government-funded Hub will host everything from AI agents to 3D models, apps, and lessons and will be MOTAR’s common discovery point.  The Hub offers the prospect of AI agents being created for one training course and then being discovered and used by other vendors and users.  Watry explained “I think we're going to help change the equation. Where the ecosystem's really going to win is because vendors will choose what they really want to focus on and do well at and then use everybody else's content to create the training”.  Recording and annotation tools will also lead to valuable hosted content with Watry predicting “exponential growth in training material right out of existing content”.

This article is sponsored by Unity Technologies in support of its partners.  Find out more about Unity’s dedicated business and technical support for government and contractors at government@unity3d.com. Contact Dynepic at info@dynepic.com.