Marty Kauchak, Halldale Group Editor, and Rick Adams, MS&T Editor, conducted a wide-ranging interview with Sébastien Lozé, Industry Manager, Simulations at Epic Games. This is the third of three overviews from the overview on key themes from Unreal Engine’s rapidly evolving and expanding ecosystem – this, on Infrastructure and Deployment solutions available to Simulation creators.

Delegates at 2021 I/ITSEC are seeing many of the 30+ exhibitors on the conference floor demonstrating their latest simulation applications – all driven by Unreal Engine – as highlighted in the first two parts of this interview - Unreal Engine Integration Made Easy for Simulation Content and Unreal Engine Based Turnkey Solutions Presented at I/ITSEC 2021.

We have seen in our previous articles how simulation creators can leverage Unreal Engine in their content creation pipelines and what type of innovative simulation turn key solutions some are already delivering to the end users. The selection we are presenting here is about the software tools, devices and solutions allowing for scalable infrastructure and agile deployment of these simulation applications. Lozé provided an overview of this sector, observing that mission plans are meant to be changed, and deployment flexibility is becoming essential for organizations who want to deliver to the point of need. “These technology providers are using Unreal Engine to deliver seamless deployment solutions that ensure systems interoperability and bring the power of real-time training to even more locations or mediums.

2021 I/ITSEC Users for Infrastructure and Deployment.

We identified more than 10 different Unreal Engine users expanding their product and service envelopes by providing simulation specialty features around Unreal Engine, including many plugins cutting off any integration burden for simulation application developers.

AMAZON WEB SERVICES (Booth 421) AWS is working with collaborators such as Epic (Unreal Engine) and Cesium to deliver new capabilities in modeling and simulation through the use of the Cloud. Lozé noted these capabilities allow developers to parallelize simulation workloads and distribute their computing processes across multiple servers, enabling simulations with greater size, density, and complexity. In one specific instance of how AWS is bringing Cloud-based capabilities into the simulation and training mainstream, AWS RoboMaker, now Unreal-enabled, is a Cloud-based simulation service that allows robotics developers to run, scale, and automate simulation without managing any infrastructure. Sebastien Loze encouraged delegates to “Stop by the AWS booth to see how these and other new innovations are enabling developers to recreate real-world cities and simulate entity interactions across large crowds of Unreal Engine actors in real-time – in fact, up to one million entities powered by Unreal Engine!” https://aws.amazon.com

BARCO (Booth 1338) The digital projection and imaging technology company will highlight a variety of Unreal-powered demos on their new systems including the LED wall using 3x3 Barco XT0.9 (mm pixel pitch, high-res indoor LED display panels). Barco last week unveiled the F400-HR, the industry’s first single-chip native 4K resolution (4,096 x 2,176) projector – which can be lifted to even 6K and higher using the powerful built-in pixel-shift capability. Extremely high-speed processing of up to 240 Hz ensures even the fastest moving scenarios show all details, including content in Unreal Engine created by Vigilante and SkyReal. https://www.barco.com/en/news/2021-11-23-f400-hr-simulation-launch

HADEAN (Booth 1829) Hadean is a deep-tech scale- up based across the UK, US, and Europe. Their distributed cloud platform allows you to build single synthetic environments of unparalleled complexity. A common operating picture for multi-domain operations, it provides decision support and situational awareness for every scenario. Hadean worked with Microsoft and its Minecraft tool, and received an Epic MegaGrant for integrating Unreal Engine. Hadean has lofty business expectations, noting its goal, in part, “is to enable studios and the Unreal community to build and run the largest and most sophisticated virtual worlds and experiences. The project helps democratize the power of distributed computing, enabling developers to realize their vision, without needing to worry about computation limits or the complexity of autoscaling algorithms.” Most recently the company partnered with CAE, helping them build some of the largest environments ever used in defense simulations. https://hadean.com/

HaptX (Booth 1555) Conference delegates will be able to try HaptX’s latest haptic feedback glove product, DK2, integrated as an Unreal Engine-based experience. “The ‘feel’ of that technology, based on microfluidic haptic feedback is very impressive,” Lozé pointed out, and as a ‘teaser’ added, “You’ll be hearing much more about that in the future.” The HaptX Unreal Engine plugin interfaces with its SDK, allowing haptic-specific development. https://haptx.com

IMMERSIVE DISPLAY SOLUTIONS (Booth 1768) Immersive Display is a leading provider of visual systems for military, government and commercial applications, including simulation and training. At I/ITSEC 2021, IDSI will feature the first public demonstration of Epic Games’ Unreal Engine 4.27 content on a four (4)-projector, immersive 220° cylindrical display connected via Unreal Engine N-Display. “N-Display is a essential module of Unreal Engine allowing all users to ingest their multi channel configurations at no additional cost,” Lozé said, and added, “this allows you to match the geometry of a dome or a CAVE obtained with tools such as Scalable Display or MPCDI to your application, and have this blending and warping capability directly available no matter how many visual channels you want to synchronize. The demos running on IDSI booth are very interesting dome deployment examples.” http://www.immersivedisplayinc.com

IMPROBABLE (Booth 1248) The US subsidiary present at the conference is part of the London-based global technology company, Improbable. Like its UK counterparts, they are specialists in computational modeling, distributed computing and AI. Improbable will showcase two Unreal Engine-powered demos at this conference. In a strategic and operational analysis demonstration, Lozé said the event will show the flexibility and extensibility of Improbable's platform, the ease at which additional model integrations can occur, and its platform's ability to capture key strategic or operational level analytics over the course of a simulation. A second demonstration, enabling massive user concurrency in military simulation, is an early return on investment from Improbable's games business’s recent development of an experimental gameplay mode called ScavLab that allows thousands of distributed players to enter a virtual world simultaneously, pushing the limits on player density and scale. https://defense.improbable.io/

MASA GROUP (Booth 2858) DirectAI is MASA’s software development kit (SDK) particularly suited to the creation of autonomous agents operating in an unpredictable environment, real or virtual. The SDK is used in MASA’s flagship product, SWORD. The increasingly capable SWORD software suite is used for command-and-control exercises in defense and other organizations in more than 20 countries worldwide. MASA will demonstrate its DirectAI integrated into Unreal Engine on its booth during IITSEC 2021. http://www.masasim.com 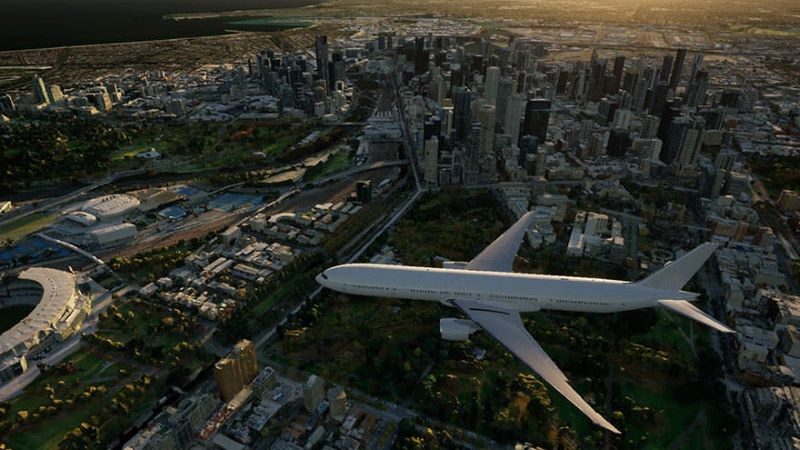 Microsoft will be exhibiting the recently announced Unreal Engine Pixel Streaming in Azure (above screen capture) and other products. Image credit: Microsoft.

MICROSOFT (Booth 1973) As recently introduced by James Gwertzman, General Manager, Gaming Cloud, Microsoft will present the latest evolutions of their Azure Cloud infrastructure solutions, including the Unreal Engine Pixel Streaming in Azure, and XR development tools (OpenXR, MRTK, UX Tools) to build applications for use with HoloLens 2 (an untethered mixed-reality headset). While Lozé recalled this team demonstrated Project Anywhere during Virtual 2020 I/ITSEC, this iteration of the conference will include live demonstrations of Project Anywhere XR (showcased on Cesium booth and illustrating and Project ExFil, showcasing native and remoting applications). http://www.microsoft.com/federal 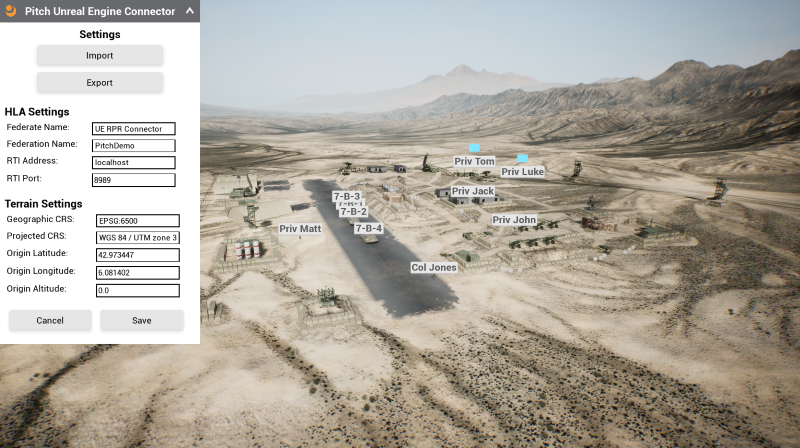 PITCH (Booth 2220) “As a member of SISO, Epic Games is really strongly supporting our favorite Interoperability standards DIS and HLA as well as many other emerging standards. Pitch is a key interoperability player in our field and you are going to see some real, interesting demonstrations at their booth,” Lozé said. With this powerful plugin from Pitch, users build solutions based on open, scalable, and secure infrastructure with assured interoperability. Three sample applications include command-and-control training, crew and individual training, and maintenance training. In another instance of the Unreal Engine ecosystem, quickly and completely integrating partners, Pitch will also highlight an integration use case from the UK Army Warfighting Experiment, where the company integrated BISim’s VBS4 with applications based on Unreal Engine. http://www.pitchtechnologies.com

RTI (Booth 1307) Real-Time Innovations (RTI) is enhancing a basic competency long-observed by MS&T – permitting defense units to train as they will operate (fight). To that end, they are synchronizing the simulation and training part of its portfolio with the Pentagon’s quickening efforts to transition into a data-centric enterprise, obtaining real-time intelligence and other content from a vast array of multi-supplier, multi-service, and multi-national sensing assets. Of specific relevance, RTI Connext® DDS is a peer-to-peer connectivity framework that fits the requirements of high-performance distributed simulation environments. Connext is reported to “let you fine-tune data streams for your network, and trade off latency and throughput – all through configuration – to allow you to get the performance and scalability you need without changing your source.” In one instance, RTI will show booth visitors how Connext can feed real-time data into an Unreal Engine project, and vice versa, for a more immersive and realistic simulation experience. https://www.rti.com/en/ 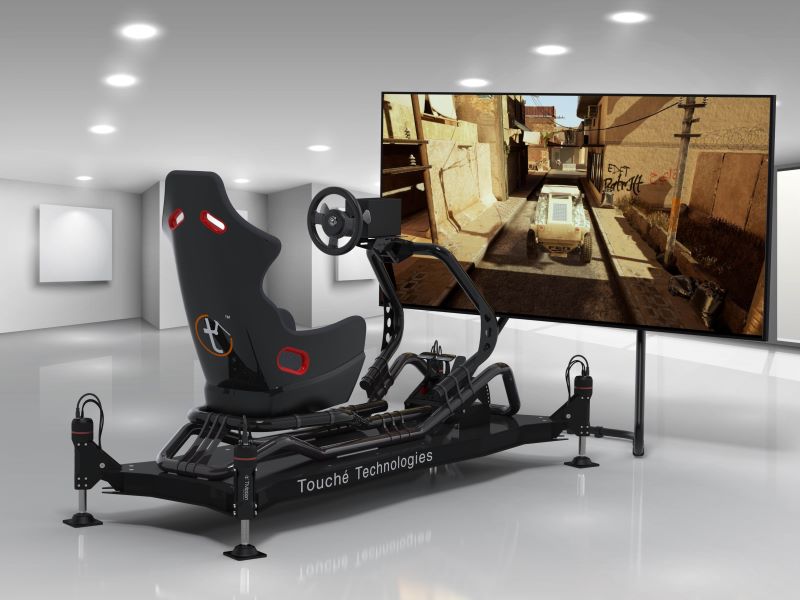 VARJO (BOOTH 3010) In 2021, Varjo achieved full compliance with its OpenXR 1.0 standard, allowing the Finland-based company to better merge virtual and physical worlds. “This is very important,” Lozé noted, and added, “The open standard, the OpenXR Foundation, is really helping the entire community leverage any game engine and any head mounted display solution very easily. This ensures flexibility and openness.” Demonstrations of particular interest at Varjo’s booth will showcase the AVRTED application from CREASYNTH. The Unreal Engine representative further explained AVRTED (Augmented Virtual Reality Tools for Engineering & Design) is an iterative and open-source solution based on Unreal Engine to visualize all kinds of projects in immersion using virtual- and mixed-reality technologies. “Its specificity is to offer a ready-to-use semi-automated modular workflow from geometry import to use in VR or XR with Varjo content [Varjo OpenXR plugin and others], and be optimized for realistic, complex projects, such as the I/ITSEC maritime environment demonstration.” Additional demonstrations at the Varjo booth with partners from its rapidly evolving ecosystem will also include META Aerospace - META Immersive Synthetics (Booth 1348)  and HTX Labs. https://varjo.com/solutions/training-and-simulation/

Halldale, MS&T Magazine team and Seb recognize that these examples listed during our interview and in our two previous articles - Unreal Engine Integration Made Easy for Simulation Content and Unreal Engine Based Turnkey Solutions Presented at I/ITSEC 2021 - could only be a subset of all the organizations using Unreal Engine in their simulation solutions. More will be presented at I/ITSEC 2021 and upcoming simulation events. Feel free to contact Seb and the simulation team at Epic Games, they want to hear about your successes and challenges - simulation@epicgames.com.