The cancellation of Exercise Pitch Black 20 (PBK20), which is acknowledged as the premier Asia-Pacific multi-national large force air exercise could have resulted in the loss of a major training opportunity for the RAAF. However, the RAAF’s Air Warfare Centre (AWC) took this an opportunity to deliver on the required training needs through a virtual exercise. The AWC plays a vital role for such tasks in the RAAF as it is responsible for provision of coordinated and integrated tactics and procedures development across all of the service’s platforms. The Australian air arm envisions that the evolution in synthetic exercises which offer improved networking capabilities will not replace live training but instead it is looking to integrate such exercises into a blended training environment that will maximise the strengths and mitigate the weaknesses of each.

The combination of live and synthetic training is a key aspect of RAAF plans to evolve into a modern, fully integrated combat force that has the ability to deliver air and space power effects in the information age. “Large-scale virtual exercises such as VPB20 are expected to increase in frequency and the RAAF, through the AWC, is investing to create the Advanced Training and Test Environment (ATTE),” a Commonwealth of Australia, Department of Defence spokesperson told Military Simulation & Technology via email. As one of the leading Asia-Pacific air arms and certainly the leader in operationalisation of synthetic training, the ATTE will afford the RAAF with the ability to conduct the training, testing and experimentation activities that are required to maximise the effectiveness of multi-domain capabilities on its modern combat platforms in live, synthetic and blended environments. “Virtual exercises, through the evolved Air Force Synthetic Environment, will be able to represent multi-domain contested, degraded and operationally limited environments to satisfy the training, testing and integration needs of these next generation capabilities at the requisite scale, complexity, density, fidelity and security,” said the Department of Defence spokesperson.

Held over a two week period, VPB20 made use of ranges of in Australia’s Northern Territory between RAAF Darwin and RAAF Tindal, while the AWC’s Distributed Training Centre (AWC-DTC) at RAAF Williamtown in New South Wales, generated and managed the synthetic scenario in the airspace along with connecting training audiences from RAAF Williamtown and RAAF Amberley in Queensland. VPB20 witnessed participation from the RAAF’s Surveillance and Response Group’s 3 Control and Reporting Unit (ground-based tactical air control), 2 Squadron (E-7A Wedgetail AEW&C), Air Mobility Group’s 36 Squadron (C-17A) and Air Warfare Centre’s 87 Squadron (tactical mission intelligence). One of the key aspects of the exercise was the merging of simulators that existed separately, creating an integrated training system that delivered a complexity, density and scale that not only met but exceeded the requirements of training partners. The main challenge was meeting certification and accreditation timelines distorted by responses to the Covid-19 pandemic. 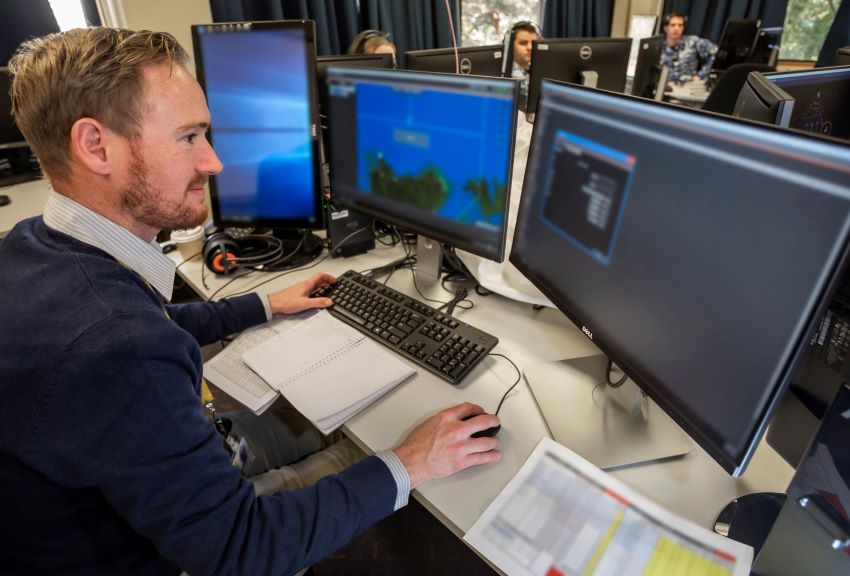 The use of Live, Virtual and Constructive (LVC) training allows advanced capabilities and tactics to be practised without the cost, complexity and planning required to get actual air assets airborne. These savings alone could accrue to the tune of millions of dollars, however, the real savings would be considerably greater but are more complex to calculate due to the sunk nature of many costs of owning and maintaining military capability. “The benefit of virtual exercises such as Virtual Pitch Black is increased efficiency of training, enabling these ‘savings’, or more accurately ‘efficiency dividends’, to be reinvested to address the training burden of the increasingly complex integrated warfighting environment,” the Department of Defence spokesperson said. “Rather than failing to keep up with the times, innovative solutions in distributed training enable commanders to deliver greater levels of capability and higher levels of preparedness within finite resource constraints.”

VPB20 also featured the integration of the RAAF’s C-17A simulator with the distributed training network for the first time as also use of PLEXSYS Australia’s ASCOT 7 (Advanced Simulation Combat Operations Trainer) simulation software. “Planning and executing VPB20 during the Covid-19 pandemic highlighted the benefits and flexibility of distributed synthetic training. While the live-fly exercise was cancelled, VPB20 was adapted with mitigation measures including distributed exercise planning, altered workspaces and condensed mission timings to meet social distancing requirements, while still delivering the desired learning outcomes,” the Department of Defence spokesperson stated. Delivering end-to-end connectivity was another of the challenges and this was resolved through troubleshooting gateway and networking settings to ensure compatibility.

The AWC-DTC provides the software and hardware to enable Distributed Mission Training in the Synthetic Environment along with the Joint Operations Command’s J7 Joint Collective Training Branch (formerly Australian Defence Force Simulation Training Centre), which provides the connectivity required. The AWC-DTC is able to provide cutting edge scenario generation and constructive forces through use of PLEXSYS Australia’s ASCOT 7 simulation software. AWC-DTC also enables improved distributed planning, briefing, execution and debrief capabilities over a mix of training and enterprise classified networks, which is further supported by the AWC’s Exercise Control (EXCON) capability. AWC-EXCON is tasked with the development, integration and control of live and synthetic large force employment exercises conducted by the AWC in support of the Air Commander’s Operational Force Generation requirements, and the integrated fifth generation force outlined in the RAAF’s Air Force 2027 Strategy. This capability is supported with expert workforce provided by Raytheon Australia, in addition to utilising the services of MilSkil, Nova Systems and Skildare Australia.

The original intent of Exercise Virtual Pitch Black was to expose the participants in the synthetic environment to the Pitch Black scenario to maximize interoperability, efficiency and effectiveness of participating forces. The first edition of VPB took place in 2018 (VPB 2018) and was conceived as a work-up to Exercise Pitch Black 2018 (PBK18), which witnessed participation from the air forces of India, Singapore, Malaysia and Indonesia with 140 aircraft and 40,000 personnel taking part.