Safety advocates’ push for a standardized approach to training pilots for Part 135 operations has gone from being a pipedream to near-reality. Robert W. Moorman explores this development.

The industry-wide proposed “standardized curriculum” (SC) concept for pilots training to fly Part 135 aircraft is gaining steam and could become the norm. Announced through an FAA Advisory Circular (AC 142-1) in May 2020, the SC, if adopted, will address administrative inefficiencies that exist between Part 135 operations and Part 142 training centers and enhance safety.

Safety is a key driver of the SC, which supports The National Transportation Safety Board’s (NTSB) Most Wanted List initiative to increase safety in Part 135 operations. The SC concept is designed to increase safety by improving the consistency of training, testing, and checking delivered to Part 135 operators. Various segments of the aviation community are supporting the idea of the SC and its common-sense based approach to training.

What makes the proposed initiative unusual is that it is voluntary. In addition, the SC would not alter or modify existing regulations regarding Part 135 pilot training or operations. AC 142-1 describes the SC concept as an “acceptable means, but not the only means” for Part 142 training centers to obtain authorization to offer training for Part 135 operators, according to the FAA.

“We recognized up front that we couldn’t do this through rulemaking,” said John McGraw, Vice President of Regulatory Affairs for the National Air Transportation Association, which represents Part 135 operators. McGraw, a former FAA Deputy Director of Flight Standards Service, was chairman of the Air Carrier and Contract Training Work Group (ACCT-WG) that did a lot of the early work on the SC concept. “The fact that this SC is so much more efficient than the earlier method will drive people to it, even if they aren’t believers.”

The cementing of an across-the-board standard was the primary goal. “The way you qualified in a particular aircraft would be the same,” added McGraw. “You would have the same check lists, same standard operation procedures and so on.”

Once the SC is approved, Part 135 operators will still be responsible for training their pilots in specialized operations.

For a report on the next steps for the ARAC, check out Standardized Curriculum: Where to From Here?

The curricula will be continuously improved as needed through safety recommendations, data analysis, or stakeholder input. Any stakeholder, including industry representatives and the FAA, may at any time recommend improvements to the curricula through the TSWG. Once the TSWG recommends a standardized curriculum for a particular aircraft, the FAA, Air Transportation Division, Training and Simulation Group accepts and publishes it through the US Federal Register. According to the AC, the SC will involve a Training Standardization Board comprised of various industry stakeholders, including Part 135 operators. Note: the SC won’t become part of a Part 135 operator’s training program until the FAA Principal Operations Inspector approves it.

Readers should note that the proposed SC is not a list of new courses that Part 135 pilots must take to obtain their license. However, some existing courses now taught could be enhanced through the SC. At present, aircraft-specific ground and flight training, which includes standardized maneuvers, procedures and functions, are taught. Pilot testing, competency check rides and instrument proficiency checks too are part of the training.

CAT queried a number of industry experts about the benefits of adopting the SC concept for Part 135 pilot training. “From a pure training perspective, the standardized curriculum will offer a closed-loop approach to training, data, analysis and feedback for a continuous improvement of the training programs accepted for use as a Part 135 standard training curriculum by the Part 142 Training Center Program Manager (TCPM),” said Aime L. Hein, Head of Regulatory Affairs - Americas for CAE. 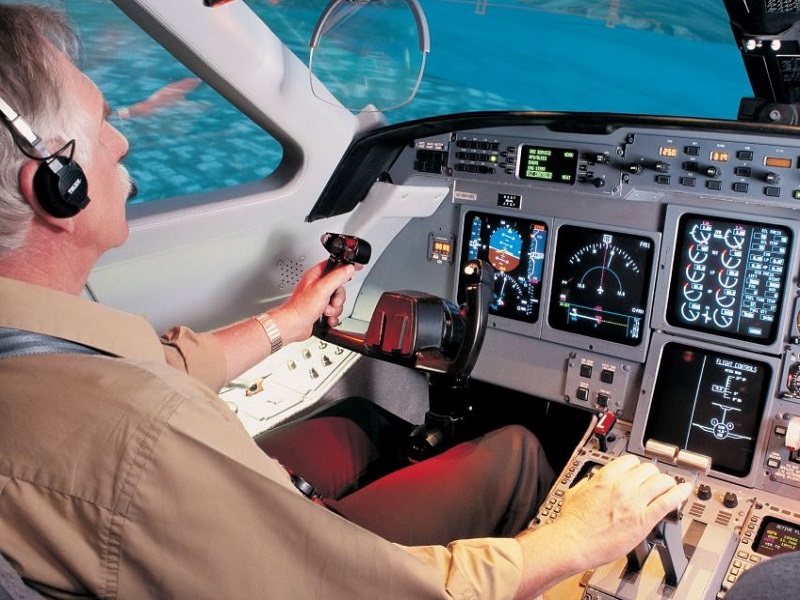 “The Rise system has evolved since introduction,” said Simon Azar, Vice President of Strategy and Marketing, CAE. “One improvement is with the tablet grading application that the instructor uses.” Image credit: CAE.

The industry lobby concurs. “There is huge benefit to having all Part 135 pilots training the same way on a particular aircraft,” said Brian Koester, Director of Flight Operations and Regulations for the National Business Aviation Association. “It allows for much more data collection. With that data collection, they [training houses] can fine-tune those training programs.”

The pilots could spend more time on areas they may have not perfected and less on those areas where they have, Koester added.

In addition, the FAA and ARAC recognize that this is not a one-size-fits-all initiative. Some Part 135 operators might still prefer to go it alone.

“There are operators which have their own philosophy toward training,” said Jens C. Hennig, Vice President of Operations for the General Aviation Manufacturers Association (GAMA). “I don’t think it would be fair to force operators to adopt to this standard.”

Hennig said there is another possible opposition component to consider: “Not every operator conducts its operations in the same environment. Different operations require different forms of training. A Part 135 search and rescue aircraft does not operate like an air taxi.”

Part 135 operators are supportive of the SC concept generally because it would fill a need. The initiative is being viewed, at least for now as a win-win proposal for all stakeholders.

“It has been industry practice for Part 135 operators to adopt training programs from the Part 142 contract training centers, and for the FAA to approve these programs as Part 135 programs,” said Dennis Fox, Vice President, Safety for Executive Jet Management  (EJM), a charter and aircraft management subsidiary of fractional ownership leader, NetJets. “This is why our first task was to validate that the training programs at the Part 142 contract training centers met all Part 135 requirements through a gap analysis. Once validated, we were able to begin creating the standardized training program.” EJM, which manages the operations of over 200 aircraft, was part of the industry task force.

Another positive is the flexible nature of the voluntary standardized curriculum. “Having pilots trained in an approved standardized program allows them to transfer these skills to another Part 135 operator,” said Fox. “The pilot would not have to go through the same training again, saving time and costs for the operators and trainers,” he added.

An element of the FAA’s proposed SC is the application of business aircraft-specific data for Part 135 pilot training. Data gathering for Part 121 pilot training is not new. Flight Operations Quality Assurance Data (FOQA), aka flight data monitoring, a method for capturing and analyzing aircraft data as it moves from point to point, has for some time been used to help train commercial airline pilots operating under Part 121 federal aviation regulations.

For a report on the options available for training pilots flying Part 135 aircraft, check out Tools of The Trade.

Data – particularly operations data – - is becoming an integral part of Evidence-based Training (EBT) and Competency-based Training (CBT) of professional pilots. Data provides instructors and chief pilots a map of a pilot’s knowledge and flying skills. The use of such data for Part 135 pilot training is rare. But that is likely to change.

“While data gathering is part of the proposed standardized curriculum, they’re still separate topics,” explained Brian Moore, Senior Vice President Operations for FlightSafety International. Which also provided input on the proposed SC. “Those on the committee felt that finalizing the SC was the priority and specifics on the data-driven component would come later.”

The name, Standardized Curriculum, threw pilots and trainers for a loop initially. It intimated the creation of all-new courses or skills pilots must complete to become Part 135 certified. Which isn’t the case. The SC is a streamlined, common-core methodology for training. From a training center’s perspective, “it makes the training center’s job easier in terms of recommended instructors and check airmen,” said Moore.

The SC will provide “down-flow benefits” for all, particularly small operators. “The tricky part is to get operators to understand that the SC will benefit them. An education campaign needs to be done,” added Moore.

Will operators that accept the SC see a reduction in training costs? All training experts CAT interviewed for this article believe so, but no savings projections were supplied.

With an SC, training houses don’t have to worry about crewmembers from different companies being paired together during training. The SC lessens the logistics and paperwork challenges.

The use of operational and other data forms to enhance Part 135 pilot training is likely to become the norm sooner than later.

“CAE’s view is that we can also use simulator telemetry data (de-identified), to validate assumptions made in aircraft certification and subsequent training regulations,” said Hein.

When launched, the SC will apply only to initial pilot training. Recurrent training will come later and be designed to enhance the abilities of Part 135 pilots. Unlike present recurrent training in various classifications, which reinforces skills pilots know already, Scenario Enhanced Recurrent Training will provide “a more realistic periodic evaluation of a pilots ability,” according to NATA’s McGraw. Instead of flying a “canned” set of maneuvers, the pilot is given a mission to fly, much like their daily operation. They will be required to plan and execute the mission and will encounter changing weather, aircraft anomalies, NAVAID outages, etc. and graded on their ability to react appropriately. The pilots will be evaluated on their performance. The data could be given to the operator and consolidated nationally to see if there are areas of training that need to be strengthened, said McGraw.

Finding someone to predict when the SC could go from concept to reality was difficult. CAT could not find anyone to answer: When will the SC be launched officially?

The FAA informed the magazine that standardized curricula would become available incrementally “based on industry prioritization.” (See below on how work on the SC will proceed.)

The work toward creating a standard curriculum for stakeholders in Part 135 operations has been a five-year sometimes-frustrating slog, but there is light at the end of the tunnel, we learned. Barring any further Covid-19 related delays, the SC could be adopted within the next 1-1½ years, according to one source. Whenever adoption comes, the SC could set a milestone for voluntary initiatives offered by industry and regulators.