When the FAA releases revised guidelines for pilot training for the modified Boeing 737 MAX, insiders expect a motion-based FFS will not be required. CAT Editor-In-Chief, Rick Adams, FRAeS, reports.

The anticipated training requirements for the modified Boeing 737 MAX aircraft will not likely require hardware changes to full-flight simulators or other MAX flight training devices which have already been built. “We’ve just done a large update to all the segments,” CAE’s Nick Leontidis told CAT. “The FAA and everybody else are doing their testing; there’s some required modifications, and we have just finished an update for all our sims. So things seem to be progressing in the right direction. I’m going to assume that things are quite mature at the moment.” Leontidis, Group President, Civil Aviation Training Solutions, for the Montréal-based simulator manufacturer and training services provider, confirmed that the updates are software-only.

“They’re obviously being very, very quiet about the whole thing,” he added. CAE had a representative on the FAA working group evaluating the training changes.

Boeing also reportedly sent draft pilot training materials to airlines “to assist in the development of their own training programs,” according to sources at US carriers.

The US Federal Aviation Administration, which is one of several aviation regulatory agencies evaluating proposed changes to the MAX, plans to issue a draft Flight Standardization Board Report (FSBR) document, assessing the impact of aircraft design changes on pilot and maintenance training, following consultation with three other CAAs: Agência Nacional de Aviação Civil (ANAC) Brazil, Transport Canada Civil Aviation (TCCA), and the European Union Aviation Safety Agency (EASA). Together with the FAA these comprise the Joint Operations Evaluation Board (JOEB).

The JOEB is scheduled to commence at London Gatwick airport the week of 14 September.

The FAA will post the FSBR draft for 45 days of public comment here. The FAA will then analyze the comments, perhaps make adjustments, and issue final training guidelines.

If the FSBR draft is published, for example, by the end of September, the comment period would not close until mid-November. Which means final guidelines might not be issued until the end of the year or early in 2021.

Will the FAA and other authorities allow pilot training before the end of the comment period and final published regulations? If, as some have speculated, the MAX could be cleared to fly by October, such a shortcut seems the only option. Otherwise, airlines are looking at December or beyond. 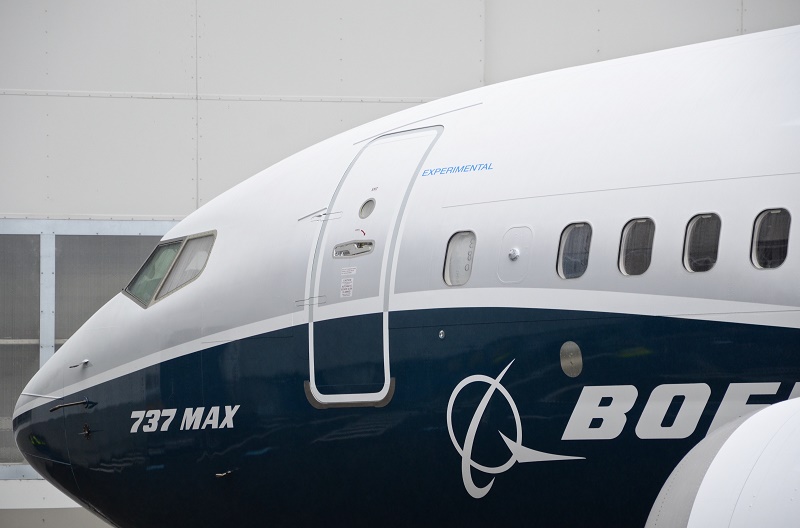 The Boeing MAX re-certification process still has several hurdles to leap before the maligned aircraft will return to operational service. Image credit: Boeing.

Differences B or D?

Preliminary indications are that the “differences” training for a pilot type-rated on another 737 model transitioning to the MAX would be at FAA Level B (not to be confused with a Level B full-flight simulator). In Advisory Circular AC 120-53B, Guidance for Conducting and Use of Flight Standardization Board Evaluations, related to modified aircraft, Level B training is categorized as “aided instruction,” indicative of classroom or computer-based training.

However, in the aftermath of the MAX’s grounding in March 2019 after two fatal accidents, Boeing employee emails revealed that the company and airlines vigorously opposed requiring more-expensive simulator training on the new design before its original certification in March 2017. In January of this year, Boeing relented and stated they now recommend simulator training for MAX pilots.

For a report on the turbulent history of the Boeing 737 MAX, check out FAA-Boeing Launching MAX 2.0

Capt. Philip Adrian, former Chief Pilot Regulatory Affairs for Boeing and now CEO of Netherlands-based Multi-Pilot Simulations (MPS), told CAT, “What I’ve heard from sources is that the requirement would up to a Level D differences requirement” (not to be confused with a Level D FFS). “Level D differences is basically a full-task integrated device that can be serviced by an FAA Level 6 (FTD) or an EASA FTD II device and/or a full-flight simulator.”

AC 120-53B states that Level D differences training “applies to related aircraft having full task differences of knowledge, skills, and/or abilities. Level D training can only be accomplished with devices capable of performing flight maneuvers in a dynamic real-time environment. The devices enable integration of knowledge, skills, and abilities in a simulated flight environment, involving combinations of operationally oriented tasks and realistic task loading for each relevant phase of flight. Level D training requires mastery of interrelated skills that cannot be adequately addressed by separate acquisition of those skills. However, the differences are not so significant that a full transition training course is required. Training for level D differences requires a training device that has accurate, high-fidelity integration of systems and controls, and realistic instrument indications. Level D training may also require maneuvers, visual cues, motion cues, dynamics, control loading, or specific environmental conditions. Weather phenomenon such as low visibility, CAT III, or windshear may or may not be incorporated. Where simplified or generic characteristics of an aircraft type are used in devices to satisfy difference level D training, significant negative training must not occur as a result of the simplification. Typically, the minimum acceptable training method for level D training would be FTD level 6.”

The circular also notes: “Operators may use a device associated with a higher difference level to satisfy a training difference requirement.” In this case, that could be a fixed-based FTD Level 7 or motion-based FFS.

The FTD Level 6 and EASA-equivalent FTD II means that the type of non-motion devices produced by Adrian’s MPS and other manufacturers can be used to train flight crews if/when the MAX is re-certified for airline operations.

MPS was shifting into MAX training device production when the aircraft was grounded. “We had a lot of customers who were looking at the MAX at that time rather than NG devices, for which there was very little appetite. That all came to a grinding halt,” Adrian related.

This week, EASA begins its evaluation of the proposed MAX changes. The process commences with flights in a modified simulator in the UK, most likely a TRU Simulation + Training-built FFS operated by Boeing Flight Services at Crawley. The week of 7 September, the European evaluators will journey to Vancouver, Canada, just across the border from Boeing’s Seattle production facility, for aircraft flight tests. The convoluted arrangements are necessitated by Covid-19 travel restrictions.

In response to revelations about the original flawed MAX certification process, EASA and other international regulators indicated they would not automatically accept the FAA’s findings.

EASA reportedly has expressed concern about the MAX’s lack of a third angle-of-attack sensor, as is common with Airbus commercial aircraft. The original Boeing design used data from only one of two AoA sensors installed near the nose of the aircraft – Safety Item #1 in the FAA’s preliminary report issued 3 August; faulty data from the sensor triggered the automated Maneuvering Characteristics Augmentation System (MCAS), which led to the fatal Lion Air and Ethiopian Airlines crashes. Boeing’s fix includes activating the second AoA sensor and using the two sensors, together with the onboard computers, to “synthesize” a third sensor.

The FAA said Boeing has “demonstrated compliance” with EASA requirements, but EASA officials are as yet non-committal. “Good progress has been made but there is still some work which Boeing needs to complete,” the agency stated.

EASA had also been seeking clarity on milestones to track progress toward implementation of changes.

On 27 August, EASA released a statement that it has been working steadily, in close cooperation with the FAA and Boeing, “to return the MAX aircraft to service as soon as possible, but only once it is convinced it is safe. While Boeing still has some final actions to close off, EASA judges the overall maturity of the re-design process is now sufficient to proceed to flight tests. These are a prerequisite for the European agency to approve the aircraft’s new design.”

Another wild card is the UK’s Brexit, which finally kicks in 1 January 2021. British Transport Secretary Grant Shapps announced in March that they would leave EASA, and the UKCAA would take on “new functions.” If EASA does not re-certify the MAX before the end of the year (which seems a remote possibility), the responsibility could devolve to the UK regulatory agency at a time when it is ramping up expertise. TUI charter specialist and other UK-based carriers are concerned that MAX aircraft and pilots might not be available for the Easter holiday start of the spring-summer flight season.

Another regulator irked by the FAA’s apparent shortcomings in the original MAX approval, Transport Canada, is the first non-US regulator to conduct simulator and flight tests – completed last week. Unlike the EASA plan, TC crews crossed the border into Washington State to fly the test aircraft over American terrain.

Canadian Transport Minister Marc Garneau is withholding public judgement until his colleagues at EASA and ANAC weigh in. “Transport Canada will not lift the flight restrictions on the Boeing 737 MAX 8 until the department is fully satisfied that all safety concerns have been addressed by the manufacturer and the FAA, and that enhanced flight crew procedures and training are in place,” Garneau said.

Canada has expressed concern about human factors, i.e. that an array of alarms and warnings can overwhelm pilots in a crisis situation. TC wants pilots to have the option to disable the stick shaker when it has been erroneously triggered, which it believes would reduce pilot distraction. Boeing is discussing a modification that would be installed after the plane returns to service, according to Livia Belcea, Garneau’s press secretary.

She added: “If deemed necessary, Transport Canada will require supplementary procedures and training in Canada.”

No date has been announced for simulator and aircraft checks by Brazil’s ANAC. It is also not yet know what positions might be taken by key regulators in Australia, the Middle East, India, and China, nor whether political tensions and events may attempt to influence the re-certification timetable. The second-largest aircraft market and the first to ground the MAX, China has said very little about its return.

Air Lease Chief Executive Officer John Plueger said, “We hope that FAA certifications of the MAX will occur this year. We have somewhat less confidence that certification by the end of the year will be achieved by all foreign regulators, including EASA and China.”

To read the more than 100 comments posted to date:

What’s Next for MAX Training?