Home » EU Pilot Peril Not the Same as US PREMIUM

EU Pilot Peril Not the Same as US PREMIUM

Pilots flying for airlines based in European Union countries are perhaps more at risk than their American counterparts for two critical reasons: so-called “self-employment” contracts at low-cost carriers and a smaller pool of senior pilots expected to retire.

Of the 65,000 pilots in the EU (40,000 of them represented by the European Cockpit Association), about 12,000 were hired under what ECA refers to as “atypical” contracts, i.e. self-employed freelancers rather than airline employees in schemes used by such airlines as Norwegian and Ryanair. Capt. Otjan de Bruijn, Vice President of the volunteer-run association and a B777 pilot for KLM, told CAT they conservatively estimate half of such pilots lost their jobs early in the Covid crisis.

Those are just the airlines which are trying to continue operations. Early in the pandemic, already struggling Flybe went bankrupt (600 pilot jobs) and Air Italy became insolvent. Braathens Regional “outsourced” 110 pilot jobs to WDL, then declared bankruptcy in April (another 130). In June, Level Europe and SunExpress Deutschland filed similar papers.

While the exact number of pilot jobs lost is yet to be determined, including through negotiation, ECA estimates an overall loss of 15-20% Europe-wide. On their website, they feature a “Redundancy Tracker” which attempts to keep up with the most recent known information. 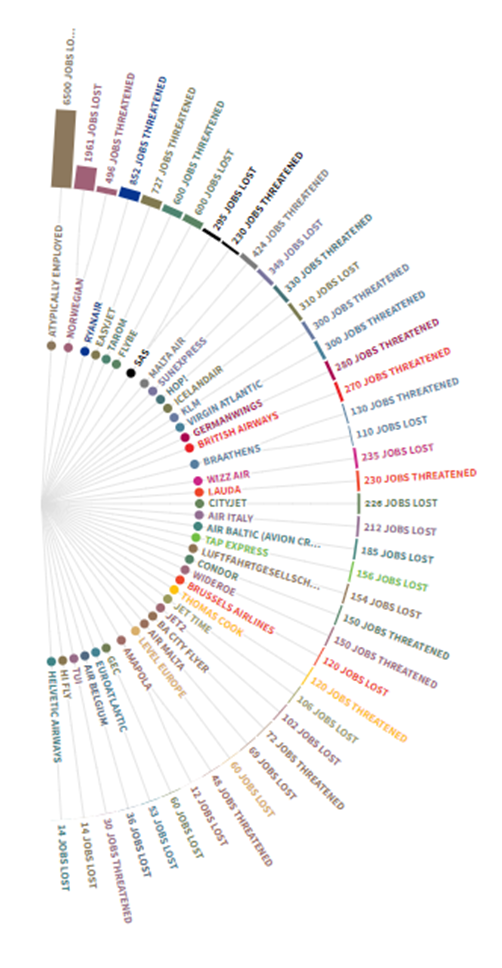 De Bruijn told us “probably 80 percent of the pilots are flying” as airlines have been ramping up their schedules through the summer, “but they are flying on kind of a part-time basis. The 80 percent might be to make sure that many of them maintain their currency.”

The airlines “are hoping, of course, that the recovery will come soon and that they can then start very quickly in operations with pilots who are still properly licensed.”

easyJet is reportedly offering pilots a “seasonal contract” in which pilots would work six months of the year. Or an option of two weeks on and two weeks off. Some are being offered voluntary leave of six to 18 months. Allegedly, pilots are warned that not accepting one of the offered alternatives could mean “less generous” severance terms.

ECA views alternative contracts as “one of our biggest concerns,” according to Capt. de Bruijn. “A model like self-employment of pilots is a pure smokescreen,” and they see risks such as working when fatigued or ill – ultimately affecting the safety of the flight.

For a report on the current state of the industry, read What About Young People in Flight Training?

“The majority of them don’t work for more than one airline, and they have no flexibility in deciding when or how many hours to work, which are both defining criteria,” the association VP added.

Whereas US airlines are expecting thousands of planned age-65 retirements, as well as pilots opting for early retirement buy-outs, there’s much less of that in EU ranks.

“I think the demography of the pilot group in general is different in the US than in Europe. This is caused by the fact that the growth pace of the airline industry always comes in waves, and these waves and their height and the years are different,” de Bruijn explained.

“Some airlines have offered voluntary redundancy packages to their pilots. A certain percentage have used this, which are maybe pilots one or two years before their retirement age. But we don't expect, by the numbers we have, a large group of pilots will be retiring very soon, which could solve the issue of overcapacity.”

Airlines are downsizing via layoffs and other budget cuts while simultaneously seeking bank loans and government bailouts, “trying to outlast this crisis, or at least a chance to recover,” noted de Bruijn. “Most airlines are working hard to reach a break-even level by the end of this year.”

Show Us the Money

For the moment, ECA cautions, “pilots in countries such as Spain, Italy, Belgium, Germany and The Netherlands may seem to be unaffected by job losses; the truth is that this will probably change. While many of those countries introduced government-supported ‘furlough’ schemes and ‘short work’ arrangements – including payroll support, conditional on protecting jobs, at least for a certain period of time – many more jobs will be lost once this protection period ends.”

“They are doing it in different ways,” de Bruijn described. “Financial support, furlough schemes, payroll support, short-time work support. It's all the same at the end. Either you get a lot of unemployed people asking for unemployment support from the state or you proactively try to support companies with the same amount of financial support.”

“I think the industry, of course, hopes on a swift recovery. Some governments will be able to extend these protection programs till the end of the year and others will probably not.”

“But there is already a provision of a large amount of money in the US to protect the jobs and to protect the airlines. I think it would be foolish now to have it expire by the first of October and just let it implode. And I think that's the same for Europe,” he opined. “I think most of the governments will extend these support programs anyway. You would otherwise have invested already a lot of money to do something which you would waste if you do not continue supporting it.”

ECA has recently established a program for its pilot members which identifies various European funds which can be used, including for such essentials as simulator sessions and revalidation of medical licences. Pilots are also invited to free seminars and a forum for mental support.

Capt. de Bruijn speculated, “I think there is a point on the horizon, in the short-term future, where we could see a working vaccine, which would mean a successful restarting of the aviation industry to a good level.”

“We do hope for recovery and for the aviation industry to emerge stronger and more resilient. The number of flights has increased, but it's still far away from the old recipe, of course, and it depends on the airline, what capacity they're flying. Most of the airlines are trying now to restore their old network, which means that they are flying to most destinations if possible, but of course with much less frequency and also with much less passengers. Some airlines also have chosen to somehow stay in a kind of hibernation mode and not increase the number of flights currently, as the load factor is pretty low,” he added.

In the two weeks through 4 September, Eurocontrol Director General Eamonn Brennan reported a 5% drop in traffic, “mainly due to low-cost carriers reducing schedules.” Ryanair remained the busiest operator in Europe but itself was off 15% from the previous two weeks. easyJet was down 19%.