Home » All in the Family

All in the Family

Airline pilot development and recruitment programs, aka pass-through agreements, are not new. Pan American World Airways and the Air Line Pilots Association (ALPA) together launched one of the first pass-through agreements in the mid-1980s, which allowed pilots flying for its subsidiary, Philadelphia-based Ransom Airlines, to become part of the major carrier after a few years with the regional.

Increased safety and consistency in training were two primary reasons for forming these in-house pipelines. But there were other considerations.

In 2016, Boeing warned in a report that 42% of US airline pilots would retire in the next decade. Boeing also predicted a need for 39,000 new airliners over the next 20 years and thousands of new pilots to fly them. That same year, the International Air Transport Association predicted that 7.2 billion passengers would fly annually by 2035. These growth projections, of course, remain in limbo until the coronavirus is brought under control globally.

It will be three years or more before these programs are fully operational, according to aviation-related associations. So adverse is the effect on the air transportation business from the virus that 100,000 airline employees could be furloughed from October 1st, warned Airlines for American CEO Nick Calio.

Yet, the plan for these training programs to be permanent vessels for pilot recruitment remains intact. Due to retirements, attrition and projected growth, United had anticipated hiring more than 10,000 pilots by 2029. But those numbers are likely to drop due to the pandemic.

“This is a planning nightmare,” said Kit Darby, President of Kit Darby.Com Aviation Consulting, a former United Airlines pilot. “Not only do you have restrictions in capacity, but there is the unknown of what a pilot is going to fly within the airline,” said Darby. “They [management] don’t know how many aircraft are needed, which ones, which fleet and which seat. And the airlines are having to deal with this challenge in a short time.”

Even after the airlines come back to pre-Covid operational levels, “there will still be a significant shortage of pilots,” added Darby.

Which is why these in-house pilot development programs are so important.

Today’s programs differ significantly from earlier iterations; they are better defined and an integral part of major airlines’ strategic growth plan and safety culture. Airlines also are investing heavily in these programs.

Aviate is partnering with the Experimental Aircraft Association on its education programs. Another factor worth noting: airlines are investing in these pilots of tomorrow and could one day provide financial help for these pilots, who presently have to shoulder most training costs.

“Our purpose in developing Aviate pilot training is two-dimensional: quality and quantity,” said Captain Curtis Brunjes, Managing Director Aviate and Pilot Strategy. “We think we can achieve better consistency, and having partnerships is key.”

He added: “Hiring high-potential pilot candidates early on and guiding them in their careers is another factor that will prepare United for future growth and maintain a high-level of safety.” 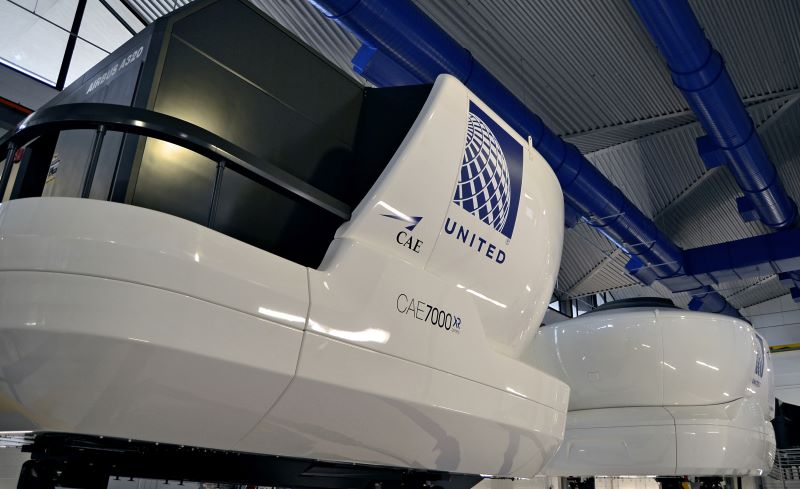 Formed in October 2019, Aviate is comprised of numerous partner organizations aligned to develop pilots from zero flight hours (ab initio) to 3,000 or more when they transition to United. The FAA 1,500-hour rule and the interdependence of regional carriers were factors in the school’s formation.

Aviation partner trainers, as well as United’s wholly owned Westwind School of Aeronautics, located at the Phoenix Deer Valley Airport in Arizona, will develop pilots to accumulate up to 250 hours of flight hours and then partner operations will have them fly commercially until they reach 1,500 hours (1,000 if they’ve graduated from an accredited university offering four-year aviation degrees. Westwind will be rebranded as United Aviate Academy.

After obtaining some professional experience, pilots move on to United Express regional carriers for a minimum of two years before joining United as an FO: Air Wisconsin, Mesa Airlines, Commutair, SkyWest Airlines, ExpressJet, Republic Airways and GoJet Airlines. United does not own any of its regional partners but has a financial stake in a few. Regionals run their own operations, with different operating certificates.

Having a dedicated, fully owned flight academy helps ensure consistency in pilot training. Said Brunjes: “Through this ownership, United will innovate in flight training and utilize data-driven performance assessments of pilots in the pipeline and at United to inform optimal training design and continuous improvement.”

Aviate might one-day provide students with the fastest, most direct path to becoming a United Captain, but no graduate has yet to land at United. Some pilots remain embedded at the partner schools or at United Express carriers.

“We still have a few hundred of our original Career Path Program [graduates] to work through until we get down to Aviate,” said Brunjes.

On other ways of attracting pilots to Aviate, Brunjes offered an avenue that is only now being fully explored – diversity. “United wants to attract diverse talent and be inclusive,” he said. “We intend to lower the barriers to entry to zero.”

United CEO Scott John Kirby stated a goal of having 50% of pilots hired be women and racial and ethnic minorities. At present, only 7.5% of United pilots are women and 10.5% ethnic and racial minorities.

Among United’s pilot partners is Jacksonville Beach, Florida-based ATP, arguably the largest independent US-based pilot training school with 49 training centers across the States and a fleet of 414 training aircraft.

“We have had phenomenal interest in our pilot training program since United began its Aviate program,” said Ashley Pillon, Manager, Airline and Corporate Partnerships. “The company focuses on an airline-oriented style of pilot training.”

Western Michigan University, which offers acrobatic training, is another training partner, as are FlightSafety International and Hillsboro Aero Academy in Portland, Oregon.

ATP offers a Credit for Private program, where students with a private pilot’s license takes all the requisite courses in six months.

As for hardware, ATP flies Piper Archers and Cessna 172 Skyhawks for single-engine training. (The new Skyhawks will be used exclusively in ATP’s Airline Career Pilot Program.) For multi-engine instruction, ATP flies 92 twin-engine Piper PA-44 Seminole aircraft. Over 60% of ATP’s aircraft have been manufactured in the last six years, said Pillon. Average age of the whole fleet is 11 years. Around 270 aircraft are equipped with Garmin cockpits.

ATP provides Part 142 CBT training at its Dallas, Texas location. The company also has training centers near United’s training hub in Chicago and three locations in Colorado. One is located at Rocky Mountain Metropolitan Airport in Broomfield. Another training center is located at Centennial Airport near Denver, and there is a new location at the Colorado Springs Airport.

ATP has developed potential market projections as a result of its partnership with Aviate but declined to share them.

United Airlines continues to operate at less than half capacity, losing millions of dollars every week. The story at American and Delta and with several US non-majors is similar. Yet, pilot training at Denver and other facilities continues, albeit at a reduced rate.

United Airlines Flight Training Center, after closing briefly at the outset of the pandemic, reopened in May 2020 and ramped up to almost a full schedule in July. At present, the Denver facility is running at 80% capacity. Much of the activity involves aircraft transition training.

Champion outlined a snapshot of one element of the transition training. Take the hypothetical case of Capt. John Smith, a senior Boeing 787 pilot in his 60s, who accepts management’s early separation package. Smith’s departure leaves United pilot trainers and logistics personnel the challenge of filling his seat.

A Boeing 777 FO, for example, qualified to upgrade to 787 Captain, would take the transition course, plus a week-long Captain upgrade course hosted at the Denver Center. The Captain’s course is focused mainly on human factors, leadership and airliner management training of a multi-million-dollar business tool.

“We want our Captains to broaden their thinking beyond the technical aspects of flying the plane,” added Champion. As of mid-September, United had offered “permanent voluntary leaves” to its pilots over the age of 62 years with 10 or more years of service.

There is a proposed letter of agreement with the Air Line Pilots Association, the pilot’s union, which, among other sweeteners, would expand that age range. United pilots were to have voted on the proposed agreement on September 28. Neither management nor the United’s Master Executive Council (MEC) would comment on the results of that ballot.

But this much we know about the contents of the agreement. Management agrees to keep some pilots that would otherwise be furloughed, in exchange for a reduction in the number of hours flown by the pilots.

“Any potential mitigation must achieve our goals: stop planned furloughs, displacements and include long-term permanent gains for any short-term, fully recoverable modifications,” stated Todd Insler, Chairman of the United Airlines MEC, in a letter to members.

Regardless of the vote, United, like its competitors, has furloughed new hires and transitioned senior pilots to other equipment. The flight schedule will remain reduced until the industry returns to pre-Covid-19 operational and revenue levels.

Meanwhile, noteworthy developments at the Denver Center continue. The facility completed a multi-year upgrade and remodeling in 2020 that includes a new wing with space for eight additional simulator bays. At present, the facility has 40 simulator bays, 37 occupied with Level D full-flight simulators. Over the last half-year, United took delivery of two 787 and three 737 MAX FFSs. In addition, the center received four Level 7 Flight Training Devices. United is also enhancing its human factors training. 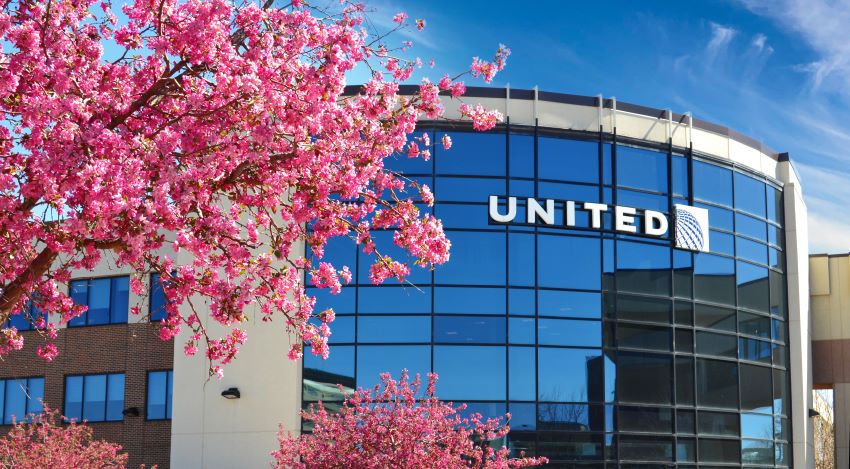 The United training center in Denver completed a multi-year upgrade and remodeling in 2020 that includes a new wing with space for eight additional simulator bays. Image credit: United.

The pandemic has become part of the training process. All trainers and trainees wear masks. Pilots are trained on the new health and security-based protocols that have been initiated at various countries served by United.

“When you inject distractions like a pandemic into the equation, you have to help people stay focused,” said Champion. As such, United is providing significant Covid-19 related content into pilot training.

“Airline training centers are a critical path to success for airlines,” reflected Champion. “The challenges presented to us by the pandemic have caused us to adapt. Which, in its own way, is a healthy thing.”