With the buzz about commercial eVTOLs an almost daily item in the global 24/7 news cycle, it’s necessary to manage expectations about the advancement of these aircraft in the US defense enterprise.

First, don’t expect to see anytime soon, the Pentagon ordering numbers of eVTOLs to rival the tallies being reported for commercial OEMs and operators.

Next, don’t look for eVTOLs to be completing diverse US military missions in the near future, in particular air-to-ground attack, operational ISR and like combat missions. Those battlefield tasks are increasingly being delegated throughout the battlespace to UASs and other vehicles in DoD’s quickly expanding advanced air mobility portfolio.

And finally, unlike the commercial aviation sector, the Pentagon’s eVTOL development focus is narrow. So, instead of the frenetic pace of research, development, test and evaluation (RDT&E) at eVTOL OEMs and other industry sites around the US, the Pentagon’s lead is Agility Prime, a division of the US Air Force’s AFWERX innovation arm. These constraints aside, the military-industry team is making significant progress in advancing eVTOL baseline technology for planned, initial logistics missions. Part of the successes in advancing pilot training programs for the first and follow-on tranches of these aircraft are being supported by S&T companies active in the defense and commercial aviation sectors.

AFWERX Agility Prime as the Enabler

On the service side, Air Education and Training Command Detachment 62 (Det 62) was established to advance and manage operator and maintainer training development. Helping to form a US whole-of-government focal point for eVTOL development, Agility Prime partnerships with the US Army, US Navy Test Pilot School, US Coast Guard, and the US Marine Corps have been established for logistics support concepts, and with NASA and other government entities for other work.

Beyond the above and other OEMs’ quick-paced work to address propulsion and other technology underpinnings, attention is concurrently focused on other weighty issues, including the skill sets military eVTOL pilots will require in initial fleets of these aircrafts. 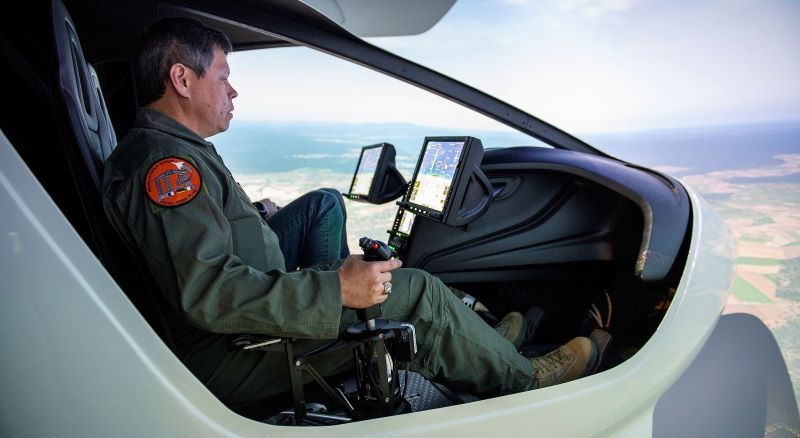 Aptima's ground-breaking work in support of Agility Prime is expected to provide "hard data for decision makers on how to improve design, training and policies around these new types of vehicles," according to Dr. Samantha Emerson. Image credit: Beta Technologies/Brian Jenkins.

Dr. Samantha Emerson, scientist in Aptima’s Training, Learning & Readiness Division, and Project Manager for the company’s eVTOL contract with Agility Prime AFWERX, initially told MS&T her company is collaborating with AETC Det 62 to gain a better baseline understanding of what it will take to train a new generation of pilots in these types of aircraft. The PM explained, “For this study, we’re looking at how long it takes to achieve a given level of flight proficiency and how that learning trajectory is affected by previous experiences (no flight experience vs experienced pilots; fixed-wing vs helicopter pilots) and by varying levels of automation (semi-automated vs highly automated). We’re also using a multi-modal approach to answer that question that involves leveraging the subject matter expertise of experienced instructor pilots rating their subjective perception of the quality of performance as well as system-based data pulled from the simulator to produce objective insights as well.”

Emerson provided her insights on this program about two months into the contract and reported, at this early stage, Aptima had completed data collection and was just now starting to dive into the data. As a teaser, the PM added, “2022 I/ITSEC [Aptima Booths 501/1292] will be the first preview into the data, but we’ll be releasing more reports through other public venues soon.”

While Aptima is still early in the data analysis process, the team can however say “that experienced pilots (both fixed- and rotary-wing) are showing pretty rapid learning trajectories and that training times will probably be much shorter than would be necessary with conventional aircraft. Anecdotally, helicopter pilots pick up on the hovering tasks a little more easily and learn how to transition between modes of flight (on the wing versus hovering) more quickly than fixed-wing pilots. But we’ll have to wait for the data to confirm that,” she emphasized, and added, Aptima is “also anticipating that there may be some areas where previous flight experience may attenuate learning curves for these types of aircraft. For example, in the more highly automated aircraft, the instructor pilots have noticed that other experienced pilots have a tendency to ‘oversteer,’ providing more input into the controls than is actually necessary.”

Aptima’s work on behalf of its Air Force customer is nothing less than ground breaking, as Emerson confirmed; currently, almost no data exists on learning to fly these types of aircraft. “And certainly, there aren’t any other studies out there that examine both ab initio and experienced pilots in two actual (rather than idealized) eVTOL prototypes using both subjective expert opinions as well as objective system-based data. The hope is that we can provide hard data for decision makers on how to improve design, training, and policies around these new types of vehicles.”

The Aptima leader was further asked that at this early point, whether and if training devices might eventually differ between eVTOL training enterprises and those supporting legacy-era aviation training organizations. While she initially responded, “I’m not sure about training devices specifically,” she enthusiastically pointed out, “Preliminarily, it does look like training times may be reduced, which is a very good thing because we’re already facing a pilot shortage, and there are about 700 different prototypes in different stages of development that will eventually need pilots. Of course, not all of those prototypes will go into development, but we’re already seeing a wide range of designs with differing levels and types of automation that are going to require pilots to learn (or unlearn) a variety of different skills.”

George Forbes, Jr., CEO at Immersive Display Solutions, Inc. (IDSI), emphasized his team’s activities in this sector started well before the Air Force Agility Prime program came into being, as “we were engaged with a leading eVTOL developer and we have been fortunate to provide solutions to the companies who have emerged as leaders in the market.” To date, IDSI has delivered systems to two Agility-funded companies including mobile trailer-based systems and fixed installation for software-integration labs and demonstrations centers.

The industry executive concluded by pointing out IDSI has a range of solutions available to its eVTOL customers. “Our customers have found our transportable solutions have been popular for marketing applications. Some customers require a small form factor so we use our compact VisionStation3 display. Other customers focus on larger size while still being able to collapse down for easy of transport so we deploy a reverse pressure screen technology. Lastly, for the fixed installation customers we offer our hard-shell domes.”

The pace of activities in the US DoD eVTOL enterprise is accelerating, and thus the concurrent demand “signal” to field qualified pilots – presenting significant opportunities for current and other S&T industry members.

In fiscal year 2023 (FY23), which began this October 1, the Air Force plans to spend nearly $74M (million) on Agility Prime RDT&E, $3.6M on procurement and $85M on operations. To help place the Pentagon’s eVTOL investment in perspective, one F-35A, the USAF’s fifth-generation aircraft, costs about $111M.

In addition, the program is planning to award FY23 procurement contracts and establish operational leases for approximately 10 aircraft for early use. The initial quantities are dependent on company development progression, asset availability and lease pricing solidification. The Air Force expects an additional 14 aircraft will be in developmental testing using RDT&E funding for a total of approximately 24 aircraft procured, on operational leases, or in testing via FY23 funding.

Against this flurry of activity, Aptima’s Emerson concluded with several themes that MS&T companion publication CAT observes at its conferences, including WATS (www.wats-event.com/). After saying she hoped that this increased demand will produce as much of an opportunity as it will a challenge, the Aptima leader said, “This is a great time to let go of legacy ways of teaching and instead move toward more competency-based and adaptive forms of training. Training development pipelines will need to be more agile, responsive, and efficient in identifying training requirements, generating training content, and developing reliable proficiency assessments. Hopefully, our data will be able to provide a baseline to start building those curricula in that pipeline and will also provide evidence to the FAA and other interested agencies that human operators are capable of safely operating eVTOL platforms.” 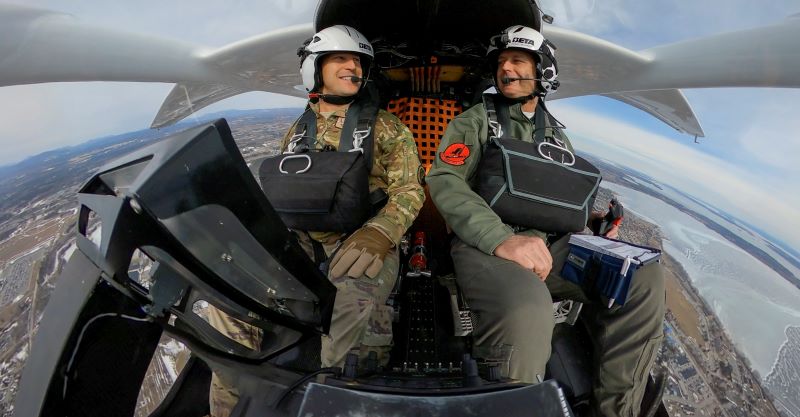 2022 I/ITSEC Impressions: Lessons from Ukraine and the Ubiquitous HMD