VRAI's ReACT VR Armour Crew Sim has won the prestigious Military Simulation & Training Award for Outstanding XR Application by a small company. The award was announced in MS&T Magazine’s I/ITSEC conference edition on 21 November and was demonstrated at the I/ITSEC conference at the Microsoft Defence & Intelligence stand, with whom VRAI has partnered with to bring next-generation simulation solutions to military end users.

VRAI co-founder, and former armoured unit commander, Pat O’Connor, commented on the award saying: “The ReACT armour crew sim is built from the ground up, we know it solves a problem for military end users because we employed top tech talent and military veterans to work with front line military end users to design and build this product. This award is validation that the solution is solving our customers' problems and helping to better prepare troops for service, which is a very fulfilling mission for us.”

The ReACT VR armour crew sim is deployed with military end users and allows troops to train when and where they need to, instead of being reliant on getting access to real world platforms, instructors and training lands.

The customer testimonial below describes the enhanced training outcomes the ReACT VR armour crew sim has already achieved, which was deployed in partnership with Kongsberg Defence and Aerospace for the Irish Defence Forces.

The Learnovate Applied Research Centre, a globally recognised centre of excellence for the future of work and learning, have recently completed a research case study on the return on investment and impact of the ReACT VR armour crew sim for military end users. The results are impressive with end users reporting that the ReACT VR armour crew sim makes training easier to deliver for instructors, provides increased “hands on” repetition leading to greater confidence for students, provides greater opportunities for crews to train together, while also providing significant cost reductions and carbon savings. 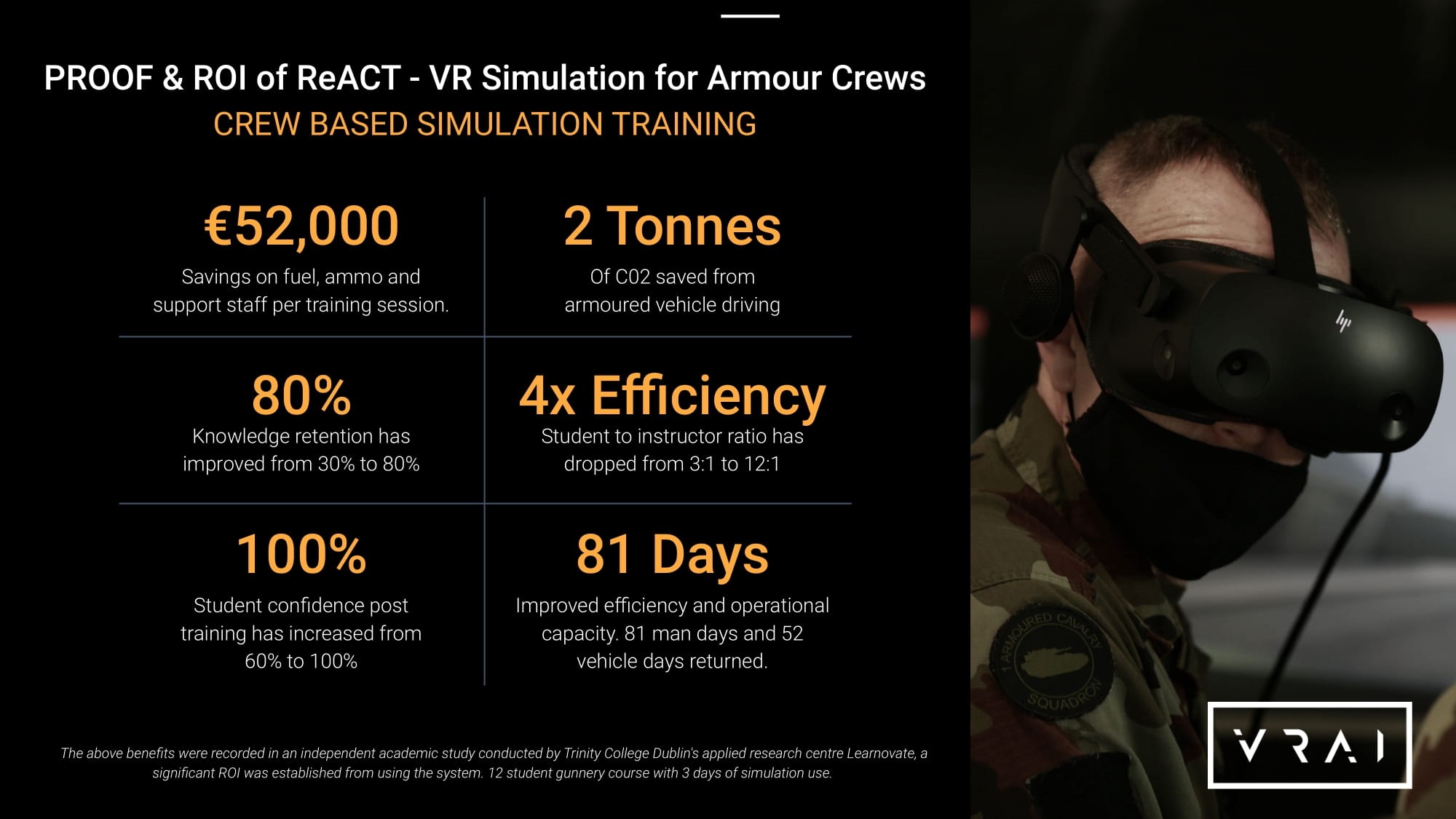 VRAI's current work in aerospace, defence and security is focussed on the ability of their products to combine virtual reality technology with data capture, analysis and machine learning (ML) in order to measure, evaluate and predict human performance, to improve training outcomes.

VRAI has developed their (HEAT) simulation data platform, which is the foundation of all of their simulation solutions,  in collaboration with the Royal Air Force, with funding provided by the UK Ministry of Defence via the Defence and Security Accelerator.

BAE Systems and VRAI announced a partnership at the Farnborough International Airshow in July of this year to work together to further develop a single synthetic environment to enable air, land, sea, space and cyber forces to plug in and train together in one virtual world, which is BAE's vision of the next-generation of training for military forces of tomorrow.

Niall Campion, VRAI Co-Founder and Managing Director for Product & Customers, commented on the partnership with BAE saying: “We believe that data, particularly data captured via virtual training, has the power to revolutionize how militaries prepare for operations.

“By capturing, storing and evaluating individual user performance data within simulation, we can deliver actionable insights to instructors' actionable insights, personalized to each trainee. Our work with BAE Systems will enable us to bring these insights right to the front line of training.”

In an increasingly complex operational environment, often characterized by forces operating advanced technological platforms but with reduced headcount and increased personnel turnover, many western militaries face the need to transform how they train and prepare their forces.

VRAI's data-driven VR simulation products were developed to support leading militaries who are now looking for ways to leverage newly matured technologies, such as virtual reality and machine learning, to transform how they train & prepare their troops, with a particular focus on providing the ability to train “at the point of need”, while exploiting their training data to measure, evaluate & predict performance.