We use cookies to provide you with a better experience. By continuing to browse the site you are agreeing to our use of cookies in accordance with our Cookie Policy.
Home » ED Scenario’s: Simulating Before Implementing

ED Scenario’s: Simulating Before Implementing. The third and final article in the series on how to improve the business of healthcare through the use of simulation.

Allen J. Giannakopoulos, PhD and Matthew Kadrie, in the third and final article in the series, share their final model to improve efficiency with the same manpower and time constraints while increasing productivity by improving processes.

Computer simulation has grown to become a cost-effective tool utilized for process improvement in the healthcare industry. Simulating changes prior to implementing the changes allows staff members to anticipate results and avoid any costly catastrophes. Typically, management makes decisions for reengineering processes based solely on “what if” scenarios. This is usually a group of staff sitting in a room and asking each other questions. What if we hire a new nurse? What would happen if we add a physician? What if that wall didn’t exist? Now, a computer simulation tool brings a better approach to process changes, allowing possible scenarios to be simulated prior to a real life implementation.

This article covers a simulation created for an Emergency Department (ED). It will include the multiple scenarios tested by the ED and incorporates the simulated results for each of the different scenarios. It will also provide the actual changes that the ED made and what results were in fact achieved.

With the help of a large number of staff from diverse areas, a computer simulation model was designed to mimic a real life, real time ED. With ED volumes increasing year after year (see ED Volumes by Month chart), the ED staff decided to experiment with multiple scenarios that could improve various issues the ED faced. Questions like: How to reduce the amount of time a patient waits to see a nurse or a physician? How to reduce the patients overall length of stay and increase patient throughput? These are questions asked over and over by ED’s everywhere, with the ultimate goal of improving patient satisfaction. Each scenario suggests a solution to an issue, testing the results in the simulation rather than real life. 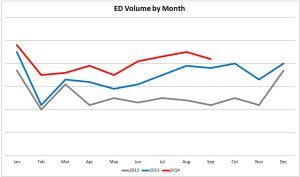 The initial build of the model required a “village” of people in order to collect the data and document the processes. First, the floor plan infrastructure was input into the simulation tool which provided an outline of the department’s structure, from walls to room capacity and flexibility. Once the floor plan was laid out in the model, it was time to start building the processes and collecting the data. Real live data was collected from several ED computer systems and the ED team also supplied data that was a guesstimate, since not all the required data was available in their systems. After the process was built and all of the data was entered, the model was validated against actual metrics used by the ED. The time it takes for a patient to see a nurse (door to nurse), to see a physician (door to doc), and their total length of stay (LOS) are all metrics that the ED tracks for performance measures. The validation proves the model’s accuracy during the timeframe in which the data was collected. The process and data in the model were tweaked several times in order to match their actual metrics. Once all of the data and processes were reconfigured and validated, the model was ready for experimentation.

ED staff members presented multiple changes that could be experimented using the simulation model. The results from each simulation would provide data metrics, such as door to nurse, door to doc, and patient LOS, that are compared to actual performance metrics monitored by the ED. The comparison could either prove their predicted outcomes right or wrong as well as assist the ED with making a decision. The computer simulation is able to simulate a scenario in a matter of minutes, compared to the months it may take to execute in real life.

The ED was made up of multiple silos including a main ED, minor care, and a task area. Each area was operated by separate staff members and during different hours. The main ED remained open 24 hours while minor care was open from 11:00 am to 11:00 pm and the task area from 10:00 am to 10:00 pm. The ED staff believed that the hours for the minor care and task areas should be adjusted to accommodate the hours that the ED has the highest admission rates. As a result, the first test scenario was created.

For the first test scenario, it was decided to extend the hours for the minor care area until 3:00 am. This would keep the area open and staffed for an additional four hours. This time frame is critical for the ED since the volume of patients pending admissions is at its uppermost. The additional four hours of minor care would keep those rooms open and staffed longer, allowing more rooms to be available for patients. Instead of having to wait in the waiting room, the extra room availability allows patients to start their treatment earlier. The ED staff believed that by accelerating the process, patient throughput would increase as a result.

The scenario was simulated for 30 replications. Each replication of the scenario represents an entire day in the ED. The results showed minor improvement in the metrics. The door to nurse times decreased six percent, door to doc times decreased five percent, and the patient LOS decreased three percent (see Extend Minor Care Hours Results chart). These results were then presented to the ED staff for their review and feedback.

Although the results were positive, they were not significant enough for the ED staff to settle on. Had they run these changes in real life, it would have taken months to make the changes and monitor the results. Hence, simulation was an optimal use because it provided results in a matter of minutes. Since these results were not the expected outcome, the staff decided to experiment with other instances.

The goal of the next scenario was to eliminate the silos altogether and have one main ED. This would treat almost all beds in the ED the same. The minor care area beds, along with some of the task area beds, would remain open 24 hours a day and be treated as a main ED bed. The ED physicians requested that some of the task area beds remain as a fast track area, dedicating them to EKG’s and patients with low priority acuities. The staffing would remain the same for this scenario in order to ensure that the results would reflect the room changes rather than any staffing changes. The scenario was simulated for 30 replications and the results showed a 16 percent decrease in door to nurse, a 30 percent decrease in door to doc, and a 12 percent decrease in patient LOS (see Extend Main ED Results chart). The ED staff was thrilled with these results but wanted to see how staffing changes could either improve or hinder these results.

The scenarios were simulated and the results presented to the ED staff for their assessment (see Staffing Scenario Results chart). After reviewing the results, the ED staff determined that they would start with the Core 7 scenario since they were currently staffed at that level. They would eventually like to shift into the Core 9 staffing because the number of staff members involved in Core 9 was approved, but was still pending on a few new hires. This meant that no major approvals for a staffing increase would be required. Instead, the ED would be able to sufficiently staff with the current number of employees.

The ED staff followed through with the suggested changes, expanding their ED and combining the different areas into one large area. Multiple changes had to occur in the ED prior to executing the changes. The ED staff had to be trained, schedules updated, beds renumbered, as well as several other changes required for this transformation. These changes took several months to establish. Once the changes were completed and in place, an additional three months passed until any results could be monitored. It took some time for staff to adjust and become accustomed to the new changes. The changes finally settled and then became the standards. All data was tracked and analyzed to determine if the results agreed with what the simulation predicted.

So how well did the simulation work? After the ED implemented all of the changes, there was a follow up on their status. The results found were astonishing. Their numbers had decreased significantly, almost in-line with the results predicted from the computer simulation model. Door to nurse was predicted to decrease 16 percent to 65 minutes. After the ED implemented the changes, the door to nurse actually dropped to 64 minutes. The simulation model was able to predict the change in door to nurse within one minute. Door to doc was predicted to drop to 53 minutes, a 30 percent decrease. The ED actually outperformed this prediction by actually decreasing door to doc times to 40 minutes. Lastly, the patient LOS was expected to decrease to 273 minutes based on the simulations results. In actuality, the patient LOS ended up decreasing to 281 minutes, only an eight minute differential. (See Results Comparison chart)

Overall, the model produced results aligned with the actual results. But not all numbers actually decreased. Patient satisfaction scores increased considerably as a result of simulating before implementing. The department realized a 32 percent increase in patient satisfaction. ED management also reported an increase in employee morale as a result. With happy patients come happy staff members. The ED staff members were ecstatic with the changes as well as the simulation model.

The results from the simulation were discussed, constructed, and simulated all within weeks. If the ED staff decided to make these changes prior to running the simulation they would have been unprepared with the staffing schedules, mistakes would have been made in predicting outcomes, and unnecessary dollars would have been wasted. By simulating the scenarios, the ED staff was more confident and prepared to make these changes that they have been pondering for some time. Although the ED may not have achieved the exact decrease in times as predicted by the simulation, the important factor is that the trend showed an immense decrease in each of the metrics that the ED monitors and the actual results demonstrated the same trend with all of the metrics decreasing significantly. The ED staff is already preparing for their next simulation.

Matthew Kadrie is IT Process Re-engineering and a member of the Process Support team at Baptist Health South Florida .