The visit to the HQ SASC Training Centre was timed to coincide with the launch of VBS4, VBS World Server and VBS Blue, integrated software from Bohemia Interactive Simulations. The new system brings several new features and benefits to any military training environment including:

The ability to provide a 180° horizontal field of view within such a small footprint is a major advance in reconfigurable dome training systems. This was made possible with support from project partners Novatech, Scalable Displays, Sony Professional, and Bohemia Interactive Simulations.

Cobra ran a short Artificial Intelligence (AI)-based demo mission, which included several air and land assets. The friendly forces were tasked with the defence of a Forward Operating Base (FOB) by delaying an advancing Armoured Infantry Company Group within a valley. The friendly assets included a number of dismounted Infantry, an attached JTAC and an Anti-Tank Section. Air support from two Typhoon Eurofighters and an A10 Warthog, two main battle tanks and an AH-64 Apache attack helicopter were also included within the scenario.

The demo was designed to highlight the benefits of a large field of view for the trainee or an observer within the battlespace for both pilot and ground forces. The user could select any first-person view of the chosen asset in real time as the mission played out.

It became evident throughout the demonstration that the new platform could advance current training facilities and enhance existing training tools. Topics of discussion included:

We asked what was important within the virtual training environment?

WO1 (Corps SM) Dickson noted: “Being situationally aware in a live fire environment is at the epicentre of our training. The greater the fidelity of the virtual training, the more informed the trainee or observer is, which leads to better decision-making, Command and Control, lethality and target effect."

and how the system could enhance facilities?

He added: “Many existing virtual training solutions focus on room scale flat projection screens with a very limited field of view. This restricts the types of training we can effectively deliver within the virtual training space, often meaning we need to jump straight from textbook into to a live environment. This presents challenges with training progressions, especially where the control and supervision of direct and indirect live fire is required.”

WO1 (Corps SM) Dickson responded: “The recent pandemic has highlighted the need to have an effective virtual training system that can be used to assess and teach both tactics and weapon employment. As technology continues to gather pace, innovative multi-use platforms that allow us to train in different disciplines and overcome time, space and recourse restrictions. This virtual training will improve live firing safety, but more importantly, it will keep our soldiers current and ready to fight in all future environments.” 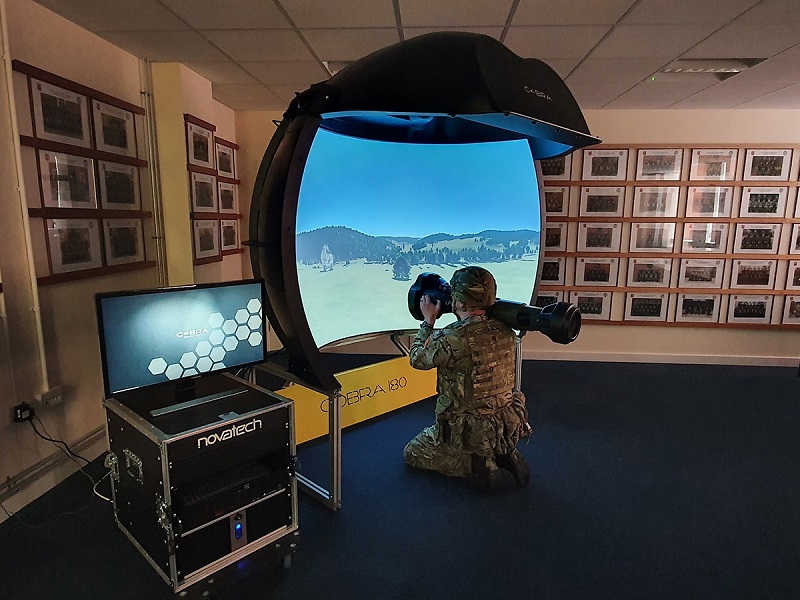 The team plans to revisit Waterloo Lines in Warminster later in the year. The Cobra180 AV system will be deployed in several different divisions and used alongside existing platforms to fully assess the benefits – underpinning its versatility as a reconfigurable dome trainer.

Alexander Bradley, Managing Director at Cobra Simulation, said: “We have always valued direct feedback from the end users of our products. The featured system has been two years in the making; the project led by Cobra Simulation and supported by its collaborative partners Bohemia Interactive Simulations, Novatech, Scalable Displays and Sony Professional. They have been fantastic partners to work with.

"Having the opportunity to share our latest collaborative project first-hand with members of our defence forces has been a great next step. We’re very grateful to our hosts and learnt a great deal about where we should focus our attention.”

To find out more, visit https://www.cobrasimulation.com/.