Asian military services are using learning technologies to strengthen their readiness levels across their mission sets. At one end of the spectrum, new training and education systems are supporting the introduction of the fifth-generation F-35A to the Royal Australian Air Force. At the same time, regional defense forces are using wargame-like solutions to allow their units and staffs to prepare for tasks in and beyond warfighting domains. Further to these trends, the overarching, major development to which simulation and training (S&T) companies, beyond and from the region, are responding is the expanding, insatiable demand for products and services by diverse Asian customers – hardware OEMs, defense departments and other government organizations, and others. This feature article selectively reviews developments in the Asian Pacific S&T defense market space through the regional portfolios of four industry companies.

Enrico Raue, International Sales and Marketing Director at MASA Group, noted a common trend his company sees in the defense market in general, and in particular in Asia Pacific, is that defense forces are striving to acquire technologies they can manage themselves. The industry veteran added, “Too many of them have had painful experiences with S&T systems and solutions, surely very competent once, but too difficult to maintain and use for them. They had to depend on frequent support from the supplier or specialist to do their job.”

Raue further spoke to a more fundamental trend in play, when he noted another interesting aspect with the Asia Pacific defense market is the important differences between the countries in the region. While some customers already have long and solid experience using S&T technologies, others have none at all. He continued, “For some, staffing and overhead is a very important issue and reducing overhead is essential and some have almost unlimited resources regarding staff. But for all of them it is important to have access to solutions that are easy to use and that are light weight.”

Elsewhere in this regional market, Randy Gawenda, Business Development Manager, at Frasca, called attention to his company’s support of offset activities as part of contracts, not only in Asia Pacific, but elsewhere beyond the US, in particular in Africa. The Urbana, Illinois-based industry expert noted his company provides operator and maintenance training as part of some contracts to help impart technical ability to supporting personnel for a system and build infrastructure in that nation. “This simply allows them to maintain and sustain the devices themselves, without having to rely on overseas personnel to do so or having to pay for an in-country contract logistics support provider,” the sector expert remarked. Beyond meeting offset requirements and tailoring M&S solutions to different end users, other compelling developments are in play in the Asian region.

MAK Technologies’ Steve Peart, the firm’s Senior International Sales Manager, reported his Asian portfolio has diverse customers, including Australia-based Universal Motion Simulator (UMS). MAK is supplying its VR-Forces and VR-Engage products to UMS, which is on contract to produce and deliver six simulators that will furnish driver and crew training for the 211 Block II Boxer 8x8 Combat Reconnaissance Vehicle being supplied to the Australian Army by Rheinmetall Defence Australia.

Peart then reflected on three other representative MAK-supported Asian defense programs. Further north in the region, MAK is furnishing its VR-Forces, VR-Vantage, Sensor FX and RTDynamics’ FixedWingLib to support a small arms artillery trainer at the Japanese Ground Self Defense Force’s Camp Fuji School. Peart noted the artillery trainer was delivered by CAD Center Corp. of Japan and further explained, “It’s a fully hardware and software integrated solution. This is a simulation trainer for the Japanese Self Defense forces to practice and rehearse in and around the Okinawa Islands for ground, naval and air simulation training.”

Localization is Key to Success

In an adjacent sector, MASA’s SWORD is a complete wargame solution with automated forces for high-level training and analysis increasingly used by defense services around the globe. SWORD has been delivered to military customers in Japan, Singapore, Australia, New Zealand and Bangladesh. The company’s Raue provided key insights on his product’s success in the region, first pointing out localization – to include adaptation, translation and other support – of SWORD is mandatory for most of the region’s users. He added, “MASA has local agents, resellers and industry partners in most of the countries in the region. They are managing the day-to-day relations with our users and prospects. Some of them integrate our solutions in their offerings. Others supply it as-is, only providing training services and allowing the user to manage the solution themselves.” 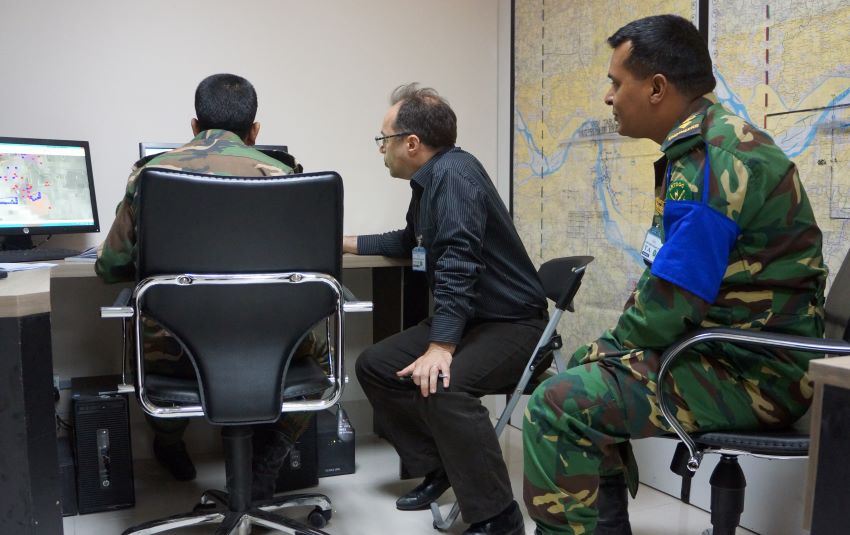 Of continued editorial interest has been the use of learning technology to expand military services’ training beyond a joint (with other services in that nation) or combined (with other nations’ military forces) context to a whole-of-government (with other government agencies and civilian organizations) capability. To that end, MASAs SWORD offering is reported to be very well fitted for the training of crisis cells at crisis management sites for a vast scope of different scenarios. Indeed, Raue called attention to several of his company’s defense users in this region using SWORD to train army and other forces together in operations other than war, crisis management events, as well as well as total defense scenarios.

Australia, Japan and South Korea are the regional members approved by the US Government to acquire Lockheed Martin F-35 Lightning IIs. This article also briefly examines this development through the lens of Australia and, more to point, how the training system is evolving to support the Royal Australian Air Force (RAAF) customer’s acquisition of the F-35A variant – that nation’s first fifth-generation air combat capability. All 72 F-35As are expected to be fully operational by 2023.

Doyle first pointed out the F-35 Training Centre at Williamtown is integral to the attainment and sustainment of RAAF’s F-35 capability. He added, “The Lockheed Martin/Milskil team in the Training Centre are delivering training to RAAF F-35 aircrew and maintenance staff which are both key enablers to the attainment of RAAF F-35 Initial Operational Capability at the end of 2020,” and revealed, “In the coming 24 months, the F-35 training capability in Australia will be further augmented with additional Full Mission Simulators at RAAF Bases Williamtown and Tindal which will contribute to the RAAF achieving its F-35 Full Operational Capability.”

Asked to highlight the learning technologies supporting RAAF pilots and maintainers who are manning and supporting this fifth generation aircraft, Doyle initially noted the advanced learning technologies employed in the Williamtown F-35 Training Centre include high fidelity Full Mission Simulators which provide the foundational skills to enable a pilot qualifying on the F-35 to operate the aircraft solo from their first flight and to learn the application of the aircraft weapons and sensors in a simulated training environment.

He continued, “This includes the ability to interlink with other F-35 simulators for multi-aircraft missions. The Training Centre also has advanced classroom learning environment that interfaces with the F-35 electronic publication suite, enabling technicians to rehearse aircraft maintenance and troubleshooting and full-scale maintenance training aids to gain the hands-on knowledge and skills in loading and unloading weapons, canopy removal and ejection seat maintenance.”

This major S&T program leader further called attention to the two factors making the F-35 Full Mission Simulator Lockheed Martin’s most advanced virtual reality training environment – the software and the visual system. Firstly, the Full Mission Simulator uses the actual aircraft software to accurately replicate all sensors and weapons employment. Doyle contrasted this with legacy simulators which “use emulators to closely mirror the aircraft’s characteristics,” and added, “By re-hosting the actual software, pilots receive a true-to-life training and mission rehearsal experience. We then take the aircraft code and add computer-generated friendly and hostile forces. We can turn on all the ‘bells and whistles’ in the simulator for training exercises that may be difficult or too costly to set up in the live environment.” Secondly, the visual system is said to be unique to the F-35, with pilots sliding into a 360-degree dome where they are surrounded by the equivalent of 1080p (pixel) HDTV visuals. Doyle encouraged MS&T readers to “Think of the simulator as a snow globe with the pilot in the center of the scene.”

With regard to other business opportunities in this region, Frasca, along with teammate Aechelon Technology, will be providing simulation capability for Babcock Australasia’s pursuit of the Land 2097 Phase 4 Program. Under this program, the Commonwealth is looking to acquire up to 16 helicopters in the four-ton weight range for use by the nation’s special forces based out of Holsworthy.

Frasca’s recent activities in Asia Pacific also include the upgrade of an EC-120 FTD in service with the Singapore Air Force to Genesys’ IDU-450 Integrated Electronic Flight Instrument System configuration. As this issue was published, Frasca was in also discussion with an unspecified region air force regarding a new Level D Full Flight Simulator supporting that service’s EC725 fleet.

Back at MASA, the company is constantly releasing two new versions per year of SWORD. Raue noted for the coming versions, at the end of 2020 and in 2021, “we will put a lot of effort in improving the functions for training of the logistics commanders. We will release our first version of a SWORD WEB client and we are also improving the tools for administration and after-action review. A focus during last two years have been improvements of the user interface making it easier to manipulate SWORD, this will continuously be an important focus.”

While MAK’s Peart pointed out his company’s recent wins have supported ground-related training, he significantly noted, “in the future, I am expecting to see an increase in maritime simulation training and wargaming.”

S&T companies, in and beyond Asia, are responding to diverse, increasingly complex military customer requirements in the Asia Pacific region, from the supply of training devices for nations’ F-35s programs to better enabling training and mission rehearsal events for services, and their counterparts, in joint and combined missions. At the same time, the suppliers of content and services from beyond the region, are developing and strengthening, partnerships and collaborative relations with Asian-based OEMs, integrators and other organizations in program life cycles. The prospect of S&T companies from the US and other regions beyond Asia, increasingly expanding their portfolios with new and more capable products and other offerings, will allow these industry members to remain competitive in Asia Pacific well into the future.