The astonishing events recounted in the incident involving a post-major servicing ferry flight of an Air Astana Embraer 190 aircraft are worthy of huge admiration. (See “Battling a Black Swan Flight … and Winning”, by Europe Editor Chris Long, published in CAT in June 2020). The follow up by Air Astana after the close call is equally impressive.

No absolute judgement of the actions during the event is possible before the inevitable (and protracted) formal investigation has been completed, but, as is often the case with incidents and accidents, the most likely basic problem was identified quite rapidly, in fact well within 12 hours.

Even before then, things were moving in Air Astana. The General Manager in the Iberian Peninsula, based in Madrid, was already on his way to the Portuguese military base of Beja, where the flight had successfully concluded; he met up with the crew by lunchtime the following day. In Almaty, Kazakhstan, after phone conversations with the crew, the home team was briefing with the President and CEO, Peter Foster.

In line with the very strong Just Culture of Air Astana, no pre-determined views were expressed, but instead and right from the start the drive was to provide active and robust support to the crew. At those very first points of contact the concern was definitely about “is the crew all right?”, and “how were they dealing with the post-event shock”, and to emphasise to them that there was no immediate search for blame. The entire flight operations and management team, in particular Gerhard Coetzee (Senior Vice President Corporate Safety Compliance) together with Anthony Regan (COO), Igor Segedin (Director Flight Operations) and Temirkhan Mukashev (E190 Fleet Manager) immediately reassured the crew and told them not to worry, and again emphasised the need for a positive attitude. 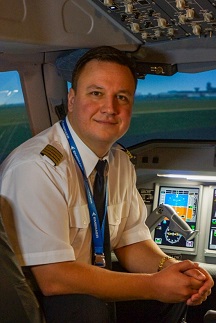 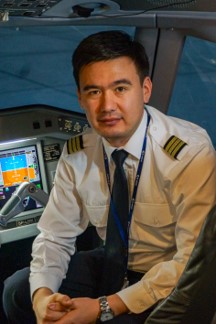 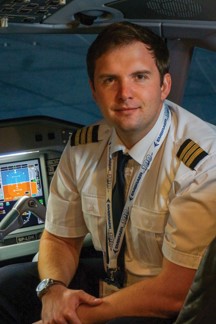 How Did the Crew Cope?

Obviously the initial impact of such a dramatic situation is one of psychological shock for the participating crew. Whereas some extreme airborne situations are over quickly and all the implications only filter through later, in this instance it was a protracted event, with the crew having plenty of time (perhaps too much) to contemplate a range of all-too-frightening possible outcomes.

Whilst they had all been subjected to an extremely daunting situation, the primary responsibility for resolving the problem naturally fell to the Captain, Slava Aushev. Not only was he senior in years to the rest of his crew, but he had started his aviation life under an entirely different regulatory and cultural regime. Whilst operational standards of the Soviet era were demanding, the tolerance of any departure from those standards was non-existent, and even the implication of error was harshly dealt with. Consequently, the backstory for Captain Aushev made him just a little bit apprehensive. He had operated under the Air Astana banner for some time and although he was not aware of any fault in his performance, his major concern was that the incident could bring (unfounded) criticism of Air Astana. Critically he immediately discovered the depth and strength of the unstinting support being provided, and was rapidly reassured that he was not alone in working through the process of getting over the drama. He much appreciated that universal help – from being welcomed back to Almaty by all the senior management team, including the CEO, but also through the uniform and constant encouragement from flight operations and fleet managers, as well as the human factors and training teams. A major boost also came through the accolades coming from the entire airline across all branches, not only from the operational crews, but from the engineering and administrative support. It became apparent that the whole airline was proud of the crew’s performance and success in getting the aircraft back on the ground safely; a steady recovery was boosted by that “feel-good” factor.

The pattern of the return to normal was common to all three crew members. First, and most importantly, was the reassurance that the support was available. There was absolutely no time pressure on their recovery, nor even a schedule to return to work if they eventually wanted to do so. They were encouraged to take time out for as long as they wanted, and to call on any help that they might welcome. They all needed some time to get their heads around what had happened, and to absorb the fact that they would be protected from unnecessary stress during the investigation. The support that they relied on came not just from their peers, but across the whole airline, and in all cases they also had critical support from their families to see them through any worries. Yes, there were the occasional nightmares and flashbacks for a time, pretty much as one would expect, but those fell away as balance returned.

Historically, aviation has drawn in people who have a passion for it. This group of three pilots certainly embodies that, and it was this passion which had them looking to get back into the cockpit after just a few weeks of taking time out. It turned out that they shared a common concern that too long a break from flying would start to erode hard-won skills. This drive to return was from the individuals, not from the airline itself, but once that desire had been expressed, a gentle re-introduction started. Naturally there was a full medical for all of them, and, similarly, the one-on-one session with a psychologist which is part of that medical, but without dramatic emphasis. Once cleared by that process, the normal recurrency training and simulator checks were carried out. The only modification to routine was the stipulation that the first operational flight would be with a TRI, but it was stressed that this was not a further check, but simply to provide reassurance as they slipped back into normal mode.

All three of the crew are very quick to report that the key to a rapid recovery to a normal life and work pattern was the across-the-board support, which rebuilt their confidence and ability to function normally in the operational world. During the incident itself there was close cooperation between them, the glue being training in CRM, and this continued once back at home, although they were then again integrated into an airline-wide team.

Now, some considerable time beyond the event, they have continued a standard airline career progression. The aircraft commander, Captain Aushev, has completed his type conversion on the A320 and is currently in command on that type. First Officer Bauyrzhan Karasholakov has also completed a type rating and is now on the A320 fleet. First Officer Sergey Sokolov, who was the Safety Officer on the black swan flight, has now qualified as a Captain on the Embraer.

More than anything else, they now want to put that event and aftermath behind them and get on with life without having to repeatedly recount and re-live that flight.

What Can We Learn?

The formal report sets out the sequence leading to the incident. Inevitably there are lessons for both the airlines and the individuals. Briefly, these include decisions that non-standard flights, such as ferry flights or post-deep servicing, require specific and detailed training and pre-flight briefing. Interestingly the consensus amongst the crew is that they will slow down and be even more deliberate when carrying out standard checks. Not to be so slow that doing that would impact on operational effectiveness, but simply to make sure that such checks have, indeed, been carried out accurately, whatever the time and operational pressures.

From an organisational point of view, it is to be aware that an organisation that simply holds formal qualifications, such as EASA 145, does not automatically guarantee a robust standard of performance, and care must be exercised when stepping outside familiar engineering or other partners.

not only keeps people well briefed, but sidesteps worrying and inaccurate rumours. An informed team can more rapidly come to terms with an unsettling circumstance, and as in this case, provide real support to those who might be under pressure.

Shortly after takeoff from Alverca do Ribatejo airbase, Portugal, the regional jet became uncontrollable. The pilots not only issued a distress signal, fighter aircraft were scrambled to escort them to the sea, where the Air Astana crew anticipated ditching their plane. Image credit: Accident flight path perspective courtesy flyback Embraer.

Peter Foster, the President and CEO of Air Astana, has been with the company for 15 years, and not only has a very clear vision of what the culture of an airline should be, but has overseen the complete integration of those principles in the day-to-day running of the airline. Of course, such a change has to be promoted and demonstrated from the top down; and if proof were needed, the reaction to this incident has shown the strength of that transformation and sets the bar very high for other companies.

Foster is at great pains to emphasise that Just Culture is not simply some bolt-on trend. It should be a guiding principle of normal business, with mutual respect and trust the backbone of the corporate structure. This is true, not only of the operational team, but throughout the entire airline. He is also keen to point out that such a Just Culture does not mean that non-compliance, intentional or otherwise, is condoned, but that it should be supported by a robust and rigorous reporting system so that lessons can be learnt and applied. Part of that is to address the issues by means of effective internal processes. That is a permanent and ongoing task – it is important not to believe that there is a point at which we can sit back and think that the job is done.

Although accountable to regulators and to the national legal framework, the airline itself drives the lessons learnt, and to a very large extent protects its employees from external pressures. It stands very firmly between them and those who may not have all the facts.

As to the specific event, Foster emphasises that not only did the crew do an excellent job in the face of extremely challenging circumstances, but that the end result also depended on the critical help from the F16s of the Portuguese Air Force and on the superb calmness and competency of the air traffic controller. Her professional reaction and guidance played an essential part in the successful conclusion of the flight.

A final thought – fortunately, there was a happy outcome to the original incident, but it can be strongly argued that the approach underscored by Just Culture has not only restored normality to the crew, its primary function, but also has released three highly qualified crew back to the airline for normal service, surely a commercially attractive benefit.