There is a dramatic rush for those companies in the eVTOL arena to bring a practical commercial proposition to the marketplace. Whilst there are an enormous number of start-ups (600+) promoting solutions via excellent graphics and presentations, there are many fewer which have anything approaching a credible flying demonstrator.

A common challenge to all of those is that there are not as yet defined regulations and certification requirements. This is a bit of a Catch 22 situation, when the engineers are trying to design a solution that would fit the best-guess final regulatory definitions, and the regulators are trying to understand the characteristics of proposed designs and see where they could fit into “classic” patterns. As both influences feel their way forward, it is essential that OEMs work as closely as possible with the relevant regulatory body. An excellent example of this is the relationship between Volocopter, based in Bruchsal, Germany, and EASA. Alongside the practical technical challenge of producing a credible operational platform is the absolutely basic essential of adapting safety as the baseline requirement and having that built in from the start.

The other overlay is to make an Urban Air Mobility System that is acceptable to both the users and to the general public. Here it is primarily the issue of noise that needs to be mitigated, and solving this becomes another primary driver.

Early on Volocopter recognised that a robust solution needed to draw on many talents. Whilst gifted young engineers would bring innovative ideas and technologies to the party, there also needed to be an input from those with a deep understanding of the aeronautical culture, with its emphasis of safety issues and overarching regulation. An intriguing example of this is the visible part of the Flight Test Team. On the one hand there is Kim-Tobias Kohn (M.Eng.), a young engineer who followed his passion for radio-controlled aircraft by then getting a Private Pilot Licence and thence into the fascinating world of designing and flying a completely new aircraft type. He bridges the gap between crewed and uncrewed test flight operations, helping to de-risk early-stage flight testing of new platforms. That enthusiasm is echoed by Paul Stone, an ex-military experimental test pilot, who brings unmatched experience in the operation of VTOL aircraft, from the Harrier/VAAC research Harrier, X32 etc. This melds into a unique blend of expertise, and the two interact seamlessly with their entire team.

In a successful bid to harness distributed power to best effect, the design of the VoloCity centres around 18 motors and rotors, driven by a quick-change set of batteries and comprehensive flight control software which reacts to performance demands. That means that the physical demands of flying are load-shed to the in-house developed software and leaves the operator to manage the task of working in a demanding and dense urban working environment. The concept is built around the acceptance that in the first years of operation it will have an on-board pilot, but that the open architecture can, in the future, facilitate operation by a remote operator or even by AI.

Urban helicopter operations are very largely weighted to Air Ambulance and Police flights - the perception of the general public is that private use is both extravagant and intrusive.

So the challenge is not simply to reduce the noise, but also to educate the public that the noise levels are no more intrusive than existing urban transport, in fact probably less. Two initiatives are being used to address those issues. Careful measurement of the noise levels and the understanding of the effect of changes of rotor speed for different phases of flight allow the fine-tuning to get the best result. A survey of 1150 spectators and general public in London revealed that there was little support for helicopters overflying until it was explained that the great majority were for public service. Perception of the level of noise was less critical when that understanding was in place. A smaller segment (150) had a survey both before and after the demonstration, with the result that all the opinions were more positive after the demonstration.

The development has been characterised by the use of simulation, but that alone is not enough. Real aircraft operation is critical to make actual measurements, which in turn validate or modify the simulated case. The initial platform to do that is the developmental 2X, which was demonstrated near Paris during live noise trials monitored by the French authorities using the same criteria as for other transportation models. This is slightly smaller than the VoloCity but has identical design principles (18 rotors etc). Given that close similarity, the results are deemed to be representative of the VoloCity itself. Although smaller in scale and weight, the disc loading (weight per area) is similar; the greater size and weight of the 5th Generation eVTOL design VoloCity is compensated for by the larger disc, so the noise footprint is preserved.

According to Ulrich Schäferlein, noise expert at Volocopter, a prime advantage of this multicopter configuration is that the noise is emitted by 18 independent sources (i.e., rotors) with similar characteristics and balanced noise radiation. This clearly distinguishes the VoloCity from classic aircraft such as helicopters, where the few but distinct noise sources - main rotor, tail rotor and engines - with their different characteristics shape the noise pattern. In particular, the deviating sound observed on the ground is much more uniform and quieter in the case of a VoloCity.

Paul Stone, the test pilot, has noted during the flight tests that the actual physical flying is very straightforward. The fly-by-wire flight controls allow simple inputs to achieve the desired aim of smooth operation. As an example of this he mentioned that, when deliberately shutting one, or even two, rotors down, there was no change to the “feel” of the aircraft. So unobtrusive was the shutdown that for the pilot the only indication was on the instrumentation. Stone also firmly believed that, given that the operating task is more about managing relatively simple systems in an aircraft with inherently good handling qualities, training support could mostly be done through Mixed or Virtual Reality systems of varying sophistication which would have the potential to significantly reduce the amount of airborne training time.

A prime reason for those tests in Paris is that the Volocopter goal is to be certified and authorised to provide an air taxi service in support of the Olympic Games to be held in Paris in 2024. That includes not only solving the technical issues for the aircraft itself, but also to respect and put in place the necessary licensing and approvals for the aircraft, the crew and Vertiports. A lot of work to do - but it should be achievable. 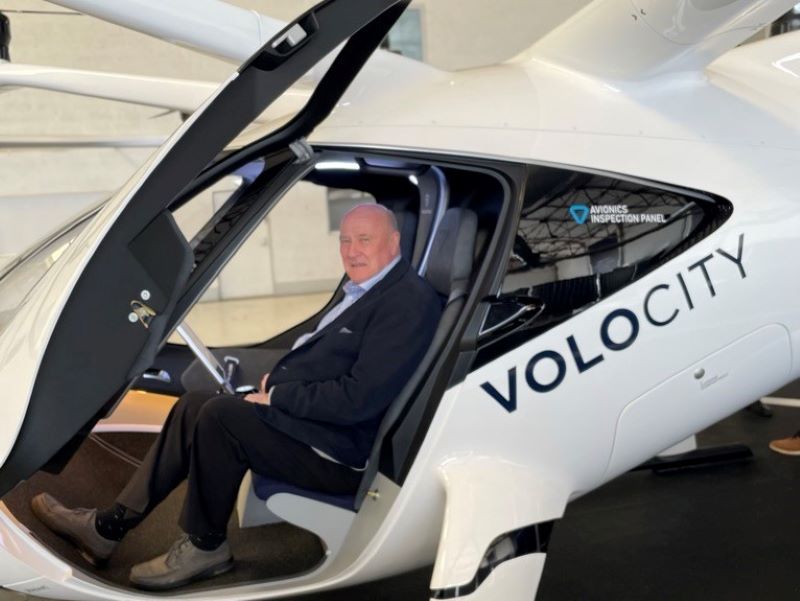