Home » Developing Simulation Centers and Training Programs in the Ukraine

Developing Simulation Centers and Training Programs in the Ukraine 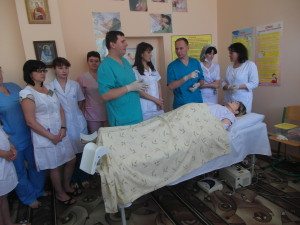 On May 30, 2013, the first Ukrainian medical simulation center was officially opened in the Crimean Perinatal Center, Simferopol city, Ukraine. The goal of this new training center is to improve the teamwork of all specialists involved in the process of delivery and neonatal intensive care. Similar medical simulation centers were opened in the second half of 2013 in three more regions of Ukraine: Volyn, Vinnytsia, and Ivano-Frankivsk.

The four medical simulation training centers were opened under the Ukrainian-Swiss Mother and Child Health Programme, which started in the area of perinatology. All four centers acquired high-tech simulators SimMom and SimNewB manufactured by Norwegian company Laerdal. The money spent on the simulators in the four centers totaled 400,000 CHF (more than 450,000 US dollars).

It all became possible due to a longstanding successful Ukrainian-Swiss partnership, which started in 1997. Broad and active collaboration with European partners and world health organizations are essential for establishment of medical simulation centers in the Ukraine within the scope of ongoing health-sector reforms.

Although some other CIS states started their medical simulation programs earlier than Ukraine, for instance, Kazakhstan, where state-of-the-art medical simulation training centers with high fidelity equipment were opened in Astana and several other cities, the accomplishments that we see in the Ukraine are of the utmost importance for the country. They will pave the way for the establishment of more simulation centers with sophisticated equipment throughout the Ukraine.

Upon the opening of the first four centers, national and international specialists in medical simulation began the process of sharing their expertise on the organization of routine training process and the use of manikins. For instance, Ana Reinolds, MD, the head of CESIMED Simulation Center in Porto (Portugal), conducted training for four regional simulation teams on scenario development and assessment of SimLab performance.

The program effectively collaborates with various national and international projects, such as WHO, UNICEF, UNFPA, WB, on implementation of a number of joint initiatives.

MEdSim met with representatives of the Ukrainian-Swiss Mother and Child Health Programme, Natalia Riabtseva and Grigory Naumovets in Kyiv, Ukraine, and they answered the following questions about the project.

MEdSim: What were the biggest challenges during the implementation of the simulation part of Ukrainian-Swiss Mother and Child Programme in the Ukraine?

We think the most serious challenges are related to:

MEdSim: What advancements do you see in Ukrainian hospitals as the result of team training offered in the recently opened centers?

It’s probably too early to analyze this, as the teams have only recently started regular training and thus far conducted not enough of them to make definite conclusions. However, the trainers note that their colleagues who have already taken simulation training now behave in a different way and are actually improving their practices.

MEdSim: What medical simulation issues need to be addressed before the completion of the programme? What are your tasks for the near future?

In general, we try to focus the efforts of the simulation centers on the topics of most urgent importance for their regions. As a project, we want to complete the following tasks before the completion of the programme. Preparing a basic manual for the teams; intensifying the training process; and organizing in the Ukraine the first conference devoted to simulation training in medicine.

MEdSim: Do you co-operate with Ukrainian medical schools and Universities, if so in what areas?

Yes, we involve people from Universities as trainers and authors of the manual.

MEdSim: Do you have a part of your programme devoted to neonatal nursing?

Not specifically. We have training courses (such as primary resuscitation, breathing disorders, etc.) developed for neonatal teams that involve both doctors and nurses.

MEdSim: What can you say about the Ukrainian medical simulation market in general, its main tasks, problems and challenges?

We would say it is rather weak and fragmented for the time being; manikins are mainly of low fidelity, and methodology is not clearly defined. But it should further develop in the near future.

Medical simulation training is becoming an accepted method for medical education in the Ukraine. There is obviously a growing need for simulation centers and their services in this country, but there are also lots of challenges, problems and vital tasks that undoubtedly the Ukrainian medical simulation industry will face in the future. It cannot be accomplished without heavy investment in the development of the systems, training and equipment purchases.

The complex strategic approach with the participation of the government institutions in cooperation across the whole Ukrainian medical community as well as participation of world’s best medical simulation specialists is needed to make simulation an integral part of medical education in Ukraine.