We use cookies to provide you with a better experience. By continuing to browse the site you are agreeing to our use of cookies in accordance with our Cookie Policy.
Home » SPONSORED BY ITPS Canada

Sponsored By
ITPS Canada
ITPS Canada is one of just eight accredited test pilot schools in the world – and one of only four approved by EASA. Visit www.itpscanada.com for more information.

Training for more than a few weeks at a test pilot school is cost prohibitive for most people. It is typically reserved for those selected and sponsored by governments or major aerospace manufacturers after many years of service, and usually followed by a return of service agreement due to the high cost of training.

The International Test Pilots School (ITPS) in London, Canada, is one of the few flight test schools that exists in the world. ITPS has an established track record of delivering tailored, cost-effective fixed and rotary wing flight test training courses on a diverse fleet of aircraft including jet trainers, transonic fighters, an Albatross seaplane and a variety of single and twin turbine helicopters. Giorgio Clementi, President of ITPS, has dedicated much of his life to promoting flight testing and training the very best flight test professionals.

Over the past 10 years, ITPS has generously sponsored 9 candidates to attend ITPS courses, 5 of whom are women. With the high training costs plus aviation, engineering, and the military being such heavily male dominated fields, it is not surprising that female flight test pilots and female flight test engineers are rare.

A few of these rare women working in flight test are ITPS graduates Esther Gayatri Saleh, Wendy Ng, Daniela Von Kameke and Danyang (Sannie) Xu. These women not only have the necessary drive, resilience and passion for the profession but thanks to Clementi and ITPS, the knowledge and skills necessary to successfully work in flight testing. 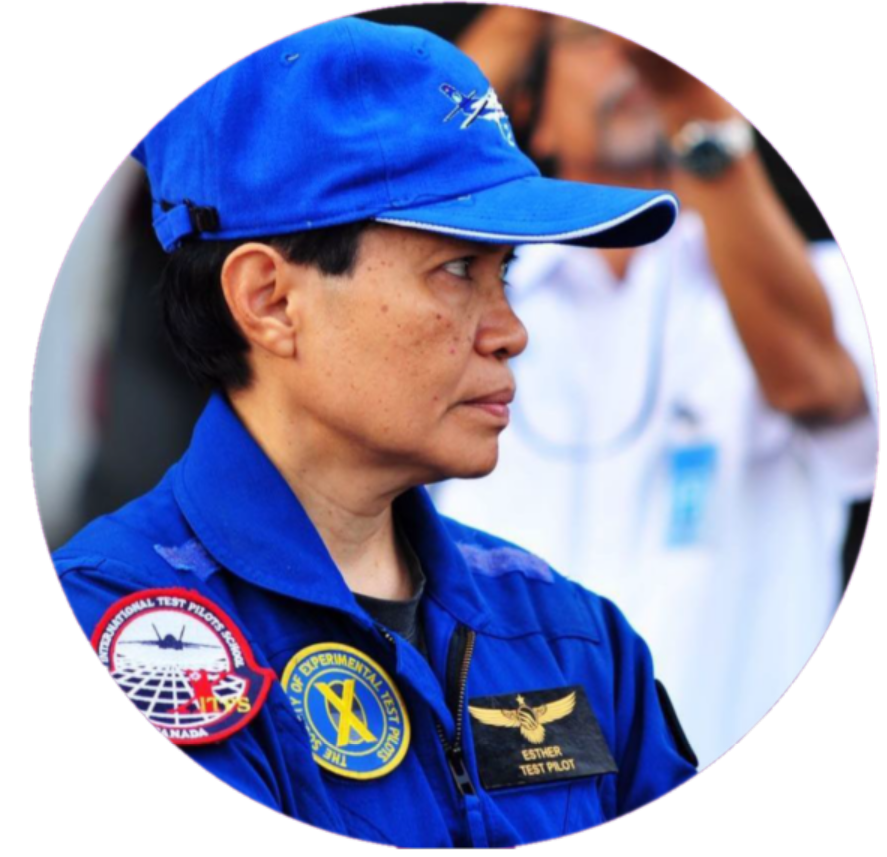 She hoped to fly for a major airline after completing her commercial flight training in the U.S. But when she returned to Indonesia in 1983, she found that almost all airline operators were reluctant to accept female pilots.

“So, I wrote a letter to the State Minister of Research and Technology, Prof. Dr. Ing. B.J. Habibie, who was also the president of Indonesian Aerospace at that time, and only by God’s grace he accepted me as a young co-pilot in aircraft manufacture,” said Saleh.

Her career steadily progressed and in 2016, she was appointed to conduct prototype flight testing on the N219, a new twin engine, 19-seat aircraft manufactured by Indonesian Aerospace. Having met Clementi years earlier, she chose ITPS to receive formal flight test training.

“During my training, it was an excellent experience to have the instructors encourage me to excel in groundschool as well as flight training sessions.” said Saleh. The ITPS ground school curriculum includes flight test theory and concepts, risk management, test planning, and data reduction and analysis. Additionally, particular emphasis is placed on how to write flight test reports and present flight test findings accurately, concisely and objectively.

In recognition of Saleh’s achievements as a test pilot, ITPS sponsored Saleh’s lifetime membership in the Society of Experimental Test Pilots (SETP). 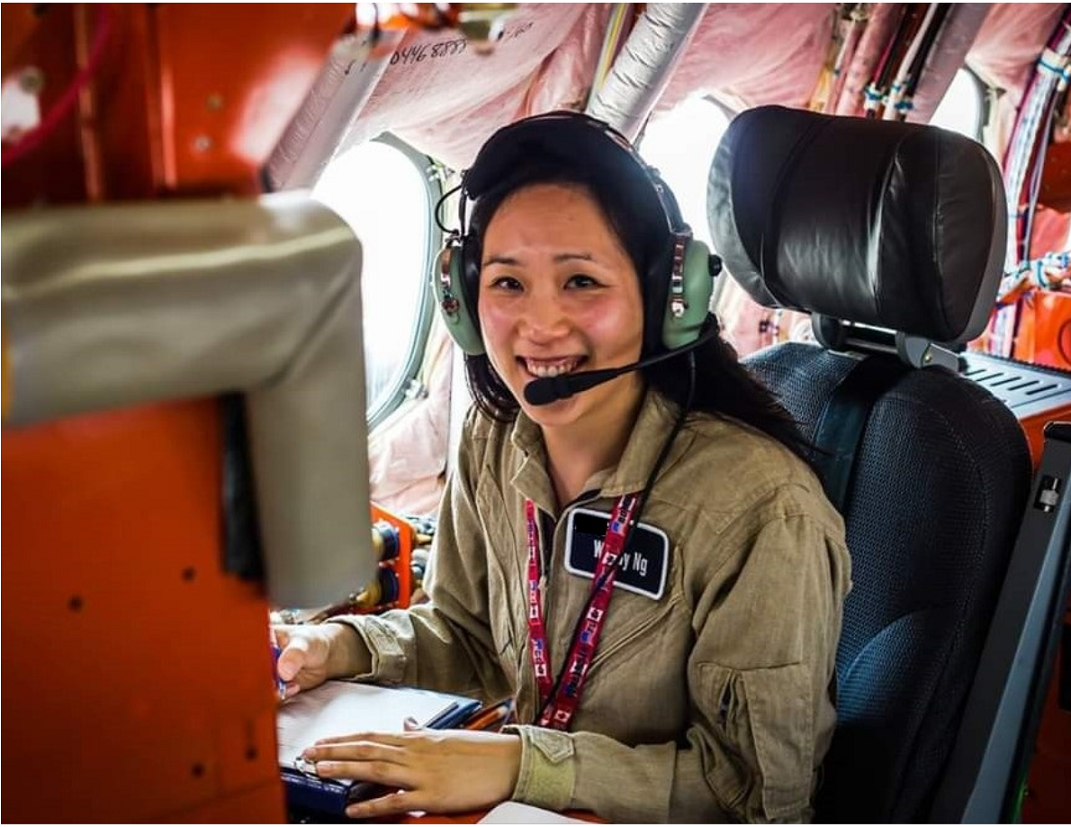 As an undergraduate student, Wendy Ng was fascinated by the idea of a flight test career. She emailed test pilot schools around the world to inquire about the cost of flight test courses and quickly realised she could not afford the training. One of those schools was ITPS and over the years, Clementi encouraged her to continue to pursue a career in flight test, despite the barriers.

“I started working as a design engineer and tried to steer my career as best as I could towards a role in flight test.” Seven years later, Clementi sponsored her to attend ITPS’s Flight Test Diploma Course in 2012. “After graduating from ITPS I was able to work my way towards being an iron bird test engineer before finally obtaining a position in flight test, as a flight test engineer.”

Ng also appreciated the unique international atmosphere at ITPS. Her course consisted of 6 students; 2 South Korean air force engineers, a Greek civilian engineer, a Belgian air force pilot, an Italian civilian airline pilot, and herself, an Australian civilian engineer. The parallel course was for a civilian team from Turkey and the instructors included experts from Canada, South Africa, Brazil and England. “This diverse range of students and instructors created a really interesting and enjoyable learning environment.”

Ng said her course prepared her to work in flight testing and taught her essential skills such as how to work in a flight test pilot and engineer team, and how to safely plan and execute testing. She credits the demanding ITPS course workload with helping to develop her ability to work under the fast pace and pressure inherent in a real flight test program.

Since graduating from ITPS, Ng has been a flight test engineer on three new aircraft certification programs. 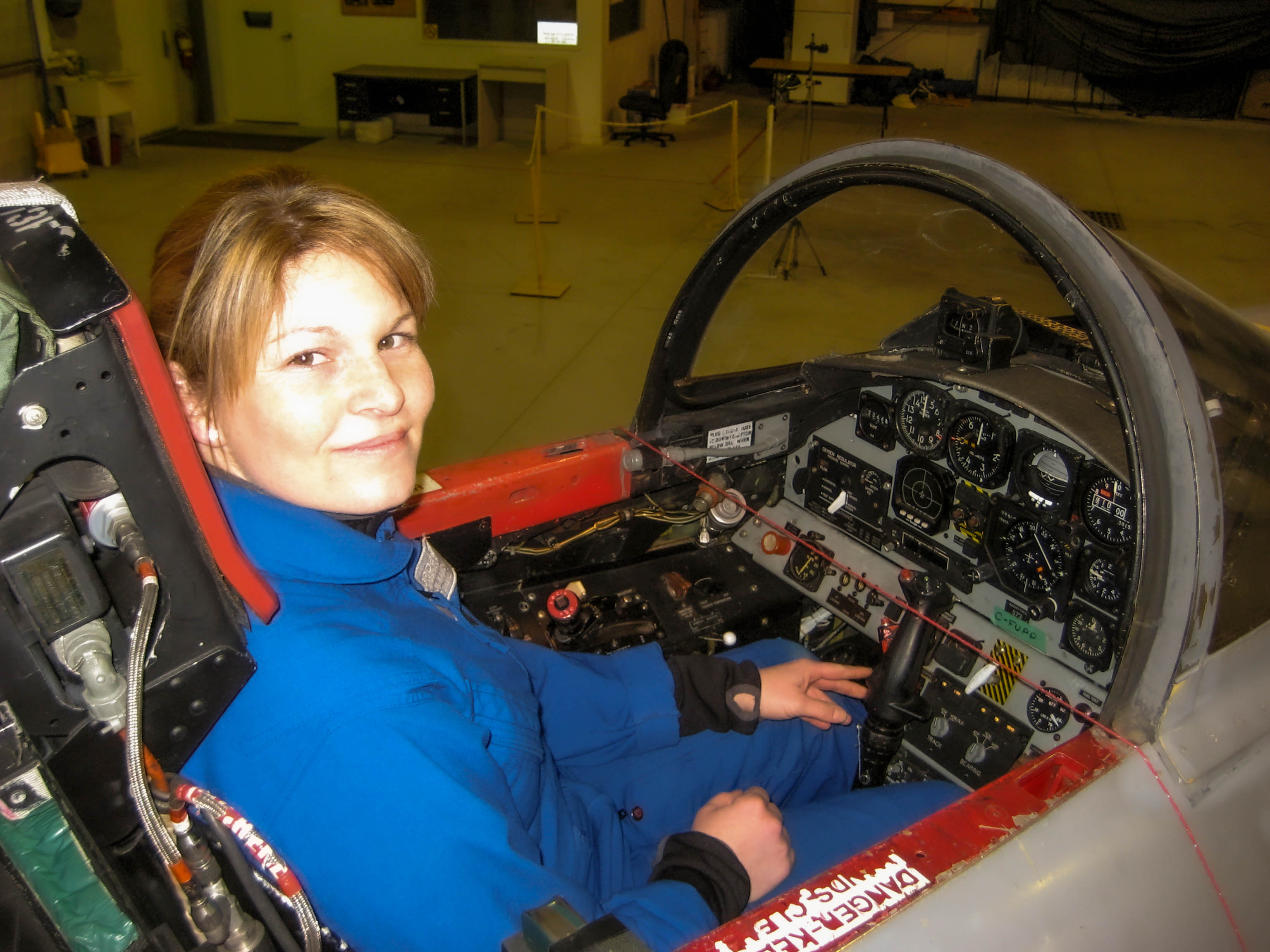 Daniela Von Kameke attended ITPS’s Flight Test Engineer Diploma course in 2011. She learned about the school when she met Clementi at Grob Aerospace in Germany, where they both worked and he later invited her to accept a sponsored position at ITPS.

Von Kameke says the training at ITPS left a lasting impression that has made her a better flight test professional.

“Safety is the highest priority.” she says. In particular, “Don’t accept any unnecessary risk and mitigate risks as much as possible.” ITPS instils a safety-first mentality in students through the traditional approach to flight testing; through gradual build up to critical conditions, thorough risk assessment, risk reduction and test planning.

After graduating from ITPS, Von Kameke became a flight test engineer at one of the major aircraft manufacturers. 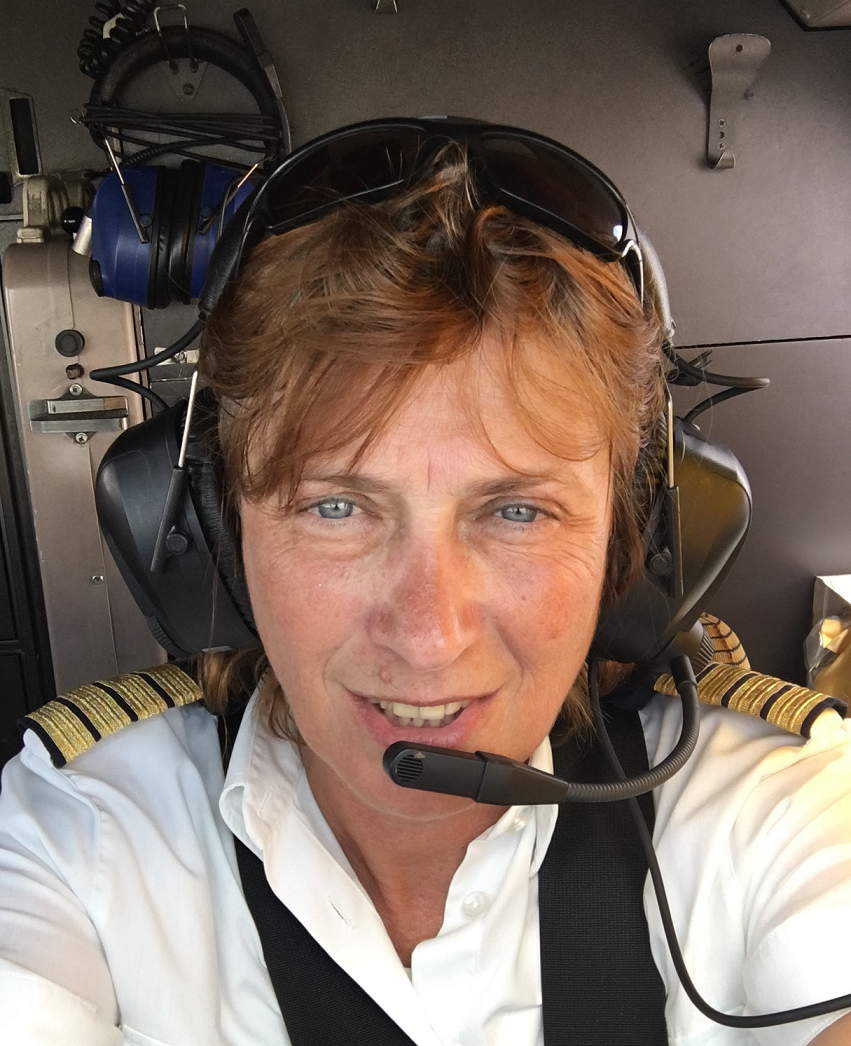 With more than 11,000 hours currently in her logbook, you’d never expect to hear that people laughed at Mirjana Fritsche Ivanovic when she said she wanted to be a pilot.

“Because of that, it was not easy to get experience in the 1970s,” reflected the Swiss airline captain, now aged 60. “I went so many places.”

While flying was always in her blood, it was an event sponsored by The Society of Experimental Test Pilots (SETP) that led to Ivanovic discovering her passion for flight testing. After many thousands of hours of operational flying experience, she was curious about how test pilots evaluated the aircraft she flew.

At one of the SETP gatherings, which she attended at her own expense, Ivanovic met Clementi. As a member of SETP, ITPS is one of the world’s top training schools for military and civilian pilots and flight test engineers. It delivers both fixed- and rotary-wing training on a diverse fleet of 20 aircraft, including jet trainers, two transonic fighters, a seaplane and a variety of helicopters.

Impressed by her enthusiasm for flight testing, Clementi offered Ivanovic a sponsored placement on the ITPS CAT-2 Test Pilot course in 2017. While family obligations called her home to Switzerland before she could complete the program, Ivanovic said the experience taught her many important lessons that have made her a better pilot.

Ivanovic said the experience “removed barriers” and changed her attitude about learning a new aircraft. “It taught me how to be more adaptable and how to circumnavigate to where you need to go in life. There will always be some difficulties.”

She admires Clementi and his team at ITPS, adding that the school is bursting with “human potential,” from expert instructors to a multicultural student body that is as diverse as it is accomplished.

“I really like that Giorgio is a great leader, but he also picks instructors and students who match his ideals. He takes people with vision and passion from different backgrounds, both military and civilian. ITPS and Giorgio and his team make things happen.” 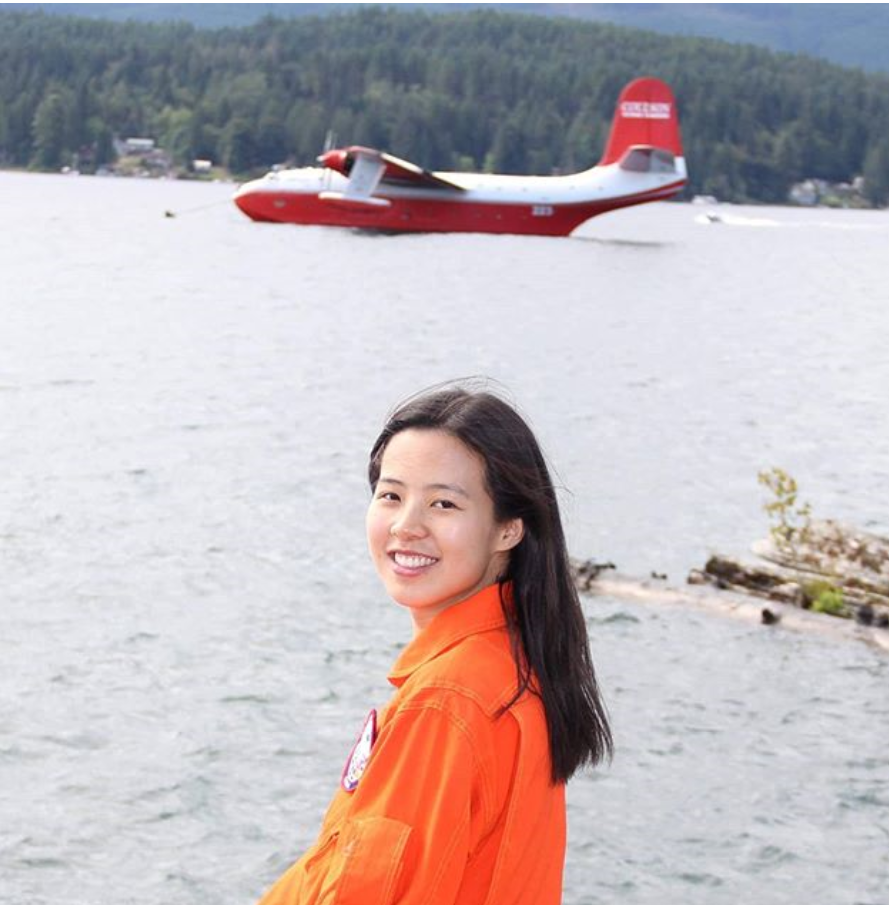 In 2015, Danyang (Sannie) Xu accompanied a group of Chinese seaplane flight test students to ITPS as their interpreter. In 2017 during her Masters of Applied Sciences at Concordia University, Xu joined ITPS as an engineering intern.

“Flying in different types of aircraft and conducting many different tests while graphing the flight test data was great fun.” she said. Besides ITPS’s diverse fleet of aircraft, ITPS also leases aircraft as necessary to ensure students are exposed to as many unfamiliar aircraft types as possible.

Clementi offered Xu a sponsored position on the one-year flight test engineer graduate course, which she completed recently, in June 2020. As ITPS’s most recent female graduate, Xu said the course was highly demanding, both mentally and physically.

“The course encompassed broad disciplines in aerospace.” she explained. “You have to grasp aircraft performance, flight dynamics, flight control systems and avionics system theories in a short time span and then use them as a foundation to plan and carry out your tests.”

According to Clementi one of the great rewards of his career has always been seeing a passion for aviation, enthusiasm, persistence and hard work rewarded, despite the odds. “I have been fortunate to enjoy an over thirty year career in flight testing, but came to it in an unconventional way, starting at the lowest rung as an aircraft maintenance apprentice and painfully working my way past the many hurdles to being a flight test engineer and test pilot instructor. I am grateful and honoured to have been able to make a contribution to the careers of some women and men and see them contribute to this wonderful profession.”

Become a member today and join our webinar free!