We use cookies to provide you with a better experience. By continuing to browse the site you are agreeing to our use of cookies in accordance with our Cookie Policy.
Home » Realism in Casualty Care Training

The blood may not be real, but it better look, feel and even smell realistic. Rick Adams looks at developments in battlefield casualty care training.

Any kid that has every created a zombie costume for Halloween or Day of the Dead celebrations knows how to make fake blood – red food colouring, a little corn starch, maybe some dish soap. In a squeeze, ketchup will do.

But how do you depict a realistic belly wound with intestines hanging out? Or an IED-amputated leg?

The term for modelling mock injuries for medical training is “moulage,” French for casting or moulding, and dates to the late 17th century when Gaetano Zummo made the first wax models for teaching anatomy. 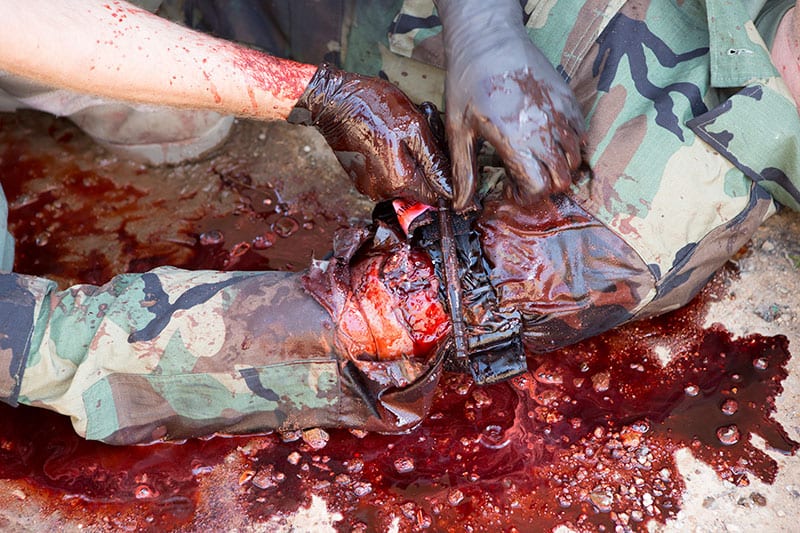 The Blood Pumping System can  be  controlled  by  the operator to simulate both venous and arterial bleeds. Image credit: Strategic Operations.

Today, it’s easy to find do-it-yourself recipes for displaying all types of gory wounds, burns, diseases, frostbite, vomit. There’s even a moulage museum in Zurich, Switzerland, with 2,000 representations of skin rashes. (More of a medical student hangout than a tourist attraction.)

Hollywood, of course, is the pinnacle of fakery, so it should be no surprise that some of the most realistic training for battlefield medical emergencies is an outgrowth of a film studio which previously specialised in action-adventure movies and television series. Around the time of 9-11, Boston-born producer / director Stu Segall was filming a shooter scene in San Diego when US Drug Enforcement Agency officers nearby heard the “gunshots” and came running up the mesa, real weapons drawn. The DEA ended up using the studio’s sets for urban scenario training, much better than duct tape on a warehouse floor, and the company Strategic Operations was created.

Since 2002, Strategic Operations (or STOPS) has provided what they term “hyper-realistic” training environments for military, law enforcement, and civilian organizations using moviemaking techniques such as special effects, role players, faux towns and villages, and makeup / moulage. They’ve delivered pre-deployment training to upwards of 850,000 soldiers, sailors, airmen, and marines, even civilians, mostly US, but British Army as well, through a Canadian subsidiary.

“We’re changing the face of medical simulation. We make immersive environments that are extremely realistic so you can do tactical combat casualty care,” Kit Lavell told MTM. Lavell is STOPS’ Executive Vice President.

A US Navy medical corpsman, training in a MOUT (Military Operations on Urban Terrain) which features “atmospherics” such as pyrotechnic explosions and simulated rocket-propelled grenades, described the chaos: “We’re seeing amputation injuries; one person had her leg blown off and had gross bleeding. We’re also seeing glass frag injuries to the scalp, very messy. It’s eye opening. A lot of chest injuries. The idea is to get practice for sucking chest wounds. When you have your own teammates going down, it definitely makes it more critical in your own mind. You know this is my guy I gotta take care of.”

A key element of the training scenarios are the role players, for which STOPS draws on its roster of movie “extras,” some of whom are amputees. Lathered in movie moulage, of course. But they also act the part of a shell-shocked soldier who has had a limb blown off. “They’ll be in uniform, disguised in among other people so the medical corpsman doesn’t notice them, even though they have blood, soot, ripped uniform,” described Lavell. “When the explosion occurs, they hit the ground screaming and yelling.”

One of the simulations is a wireless-controlled blood-pumping system, which can produce four simultaneous bleeds, venous or arterial. More than half of battlefield cases are bleeding injuries, and stopping the bleeding is the first priority. Medics can apply real tourniquets on the live human beings.

“We have a shield that fits over the arm or leg and an extremely realistic-looking wound. A synthetic artery goes between the wound and the shield, so when someone is applying the tourniquet or packing that wound they have to do it for real. It’s not make-believe,” Lavell explained. “If you don’t pack the wound properly or put the tourniquet on as tight as you need to, without hurting the person, it’ll bleed out. If they miss an exit wound, it will start bleeding.”

STOPS’ flagship product is the Cut Suit – a “human-worn simulator.” Think of it as an elastomer mannequin shrink-wrapped around a real person. It has simulated skin, rib cage, lungs, intestines, even genitals. And as the name implies, it can be sliced into with a real knife.

“You can actually put holes in the chest,” Lavell said. “You can simulate sucking chest wounds or tension pneumothorax where you have to do things like put a seal over the wound. Or if you have a collapsed lung you do a chest needle decompression. And if those fail you can do a surgical airway, a thyroidotomy” (an incision of the larynx through the thyroid cartilage). That’s the T3C version of the Cut Suit – for Tactical Combat Casualty Care, a process fostered by former Navy SEAL Dr. Frank Butler.

In the full surgical version, “you can take that Cut Suit up into an emergency room, do a chest tube on a live human being, and then wheel him into the surgery. You can actually do surgical procedures – laparotomy [to gain access into the abdominal cavity], exploratory surgery of bowel injuries with shrapnel or gunshots, bladder tap, collapsed lung removal, spleen removal, catherization.”

Lavell said there’s even a surgeon-validated olfactory test. “If they accidentally nick the intestine, it’ll smell really bad. They use a “power-packed, super-concentrated” liquid (called Liquid Ass) from a Northwest Ohio company started by a couple of college pranksters.

“In addition to looking real, it has to feel real, has to respond like real tissue and be able to be sutured,” Lavell added. The tissue-feel is a topic of intense debate in the medical training community. Before the advent of mannequin-based simulators, live pigs, goats and other animals were used to teach treatment of traumatic injury. (Alfred Hitchcock reportedly tried 100 different melons to get the right sound of a knife tearing into flesh in the Psycho shower scene, but melons don’t bleed.) Some contractors still use live tissue training (LTT), though the US Coast Guard banned the practice earlier this year and animal-rights groups are lobbying Congress to have it stopped across all services.

A Canadian study released in September concluded there was no difference in performance between medics trained on human patient simulators versus LTT models. “Even so,” researchers stated, “medics preferred live tissue training over simulation.” One participant said, “The first time a medic gets blood on their hands and tries a life-saving procedure should not be on a fellow soldier with their friends looking on.”

Lavell agrees – if the patient simulator is a mere mannequin. “If you’ve got a piece of plastic, you’re not going to be as engaged, when you don’t have that willing suspension of disbelief. Having the human in the loop [in the Cut Suit] brings a whole new dimension. You can literally see people shake when they’re providing care.”

He said STOPS and partners such as the Army Research Laboratory have measured stress using salivary hormone tests. “The degree of realism in the environment has a direct measurable result in cortisol peak levels and decreasing alpha-amylase, which is an indicator of habituation. In other words, the more realistic you train and do it over a period of time, the body learns, habituates, reduces the stress and increases adaptability.”

“Every human being is affected by the startle response. When confronted by a threat, we dump adrenaline into the blood stream, primarily to get large muscle masses moving to run away from the danger zone. Auditory exclusion, tunnel vision, loss of fine motor skills, inability to remember or associate things we’ve learned in the past with your situation today … that’s why everybody freezes up when startled. The only way to overcome that is through hyper-realistic training over and over again under very stressful situations.” 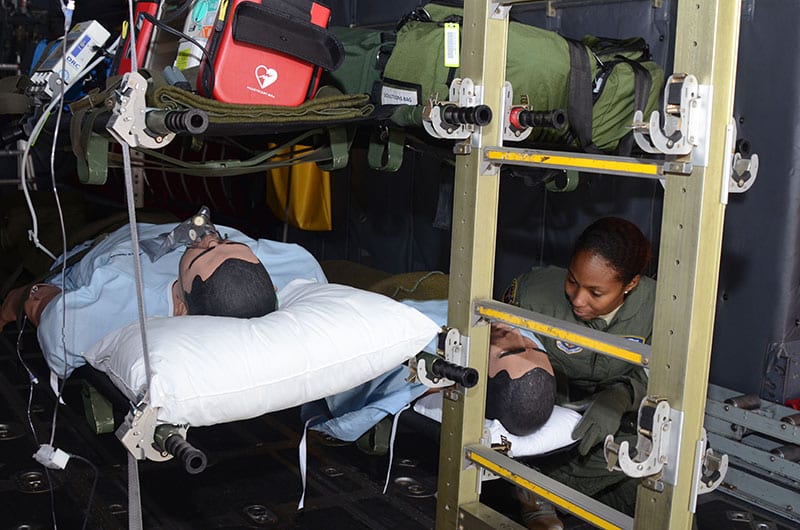 STOPS has an MV22 Osprey tilt-rotor aircraft on loan in San Diego as part of a cooperative research and development agreement (CRADA) with the US Navy, “looking at how we’re going to be able to fight the next war where we don’t have the permissive air environment where we can get someone on the battlefield onto a helicopter and within one hour, that famous golden hour, get them to Level 2 care,” Lavell said.

“If we are in southeast Asia or northeast Asia or Africa, where we have to get an aircraft in and out fast, like the MV22, and be able to go not just 20-40 minutes to get to Role 2 care, like in Afghanistan or Iraq, but an hour or two or even three hours. That means they will have to have some capacity to do damage control surgery or semi-Level 2 care in the air.”

Tactical Evacuation Care (TacEvac) is a phase that enables more advanced procedures enroute to a fully equipped medical treatment facility. Complementing the experience of the flight medics are the enroute critical care nurses who have skills in post-surgery critical care, increasing patient survivability.

Until recently, aeromedical crews have had to hitchhike on aircrew training missions, but now the US Air Force has a dedicated C-130 aeromedical evacuation training system at Dobbins Air Reserve Base, Marietta, Georgia. Developed by CAE, the trainer is believed to be the first with a motion platform (six-degrees-of-freedom – roll, pitch, yaw, surge, heave, sway), replicating vibrations and turbulence which add to the realism of the flying emergency room.

The 375th Aeromedical Evacuation Squadron at Scott Air Force Base, Illinois, did their own renovations on a non-motion C-130 fuselage trainer, making training fully certifiable for medics and ground support personnel. They also have a KC-135 cargo compartment trainer, and have shared those capabilities with the 59th Medical Wing, Lackland AFB, Texas, while they were staged at Scott for hurricane relief in September.

An Israeli company, Urban Aeronautics, has developed a multi-purpose flying ambulance drone for sending medical supplies to a battle theatre, decontaminating a hot zone, or evacuating victims. The size of a large car, the Cormorant can carry up to 1,100 pounds and fly at speeds up to 115 mph using internal rotors. CEO Rafi Yoeli expects to have it on the market by 2020.

The US Army is looking at unmanned aerial systems for medevac as well. Chief of Staff of the Army Gen. Mark A. Milley said that, in a complex environment, unmanned systems might be "the only acceptable method of supply that we can get to forward troops."

The Telemedicine and Advanced Technology Research Center (TATRC) at Fort Detrick, Maryland, is testing concepts of unmanned resupply and medical evacuation using a DP-14 “Heavy Fuel Tandem Helicopter” drone. It can carry a 450-pound payload, has a small footprint, and can do vertical take-off and landing.

They’re instrumenting the DP-14 to determine what conditions might be like for a patient riding inside, measuring factors such as shock, vibration, noise, temperature, pressure, acceleration, and pitch. And maybe odor?